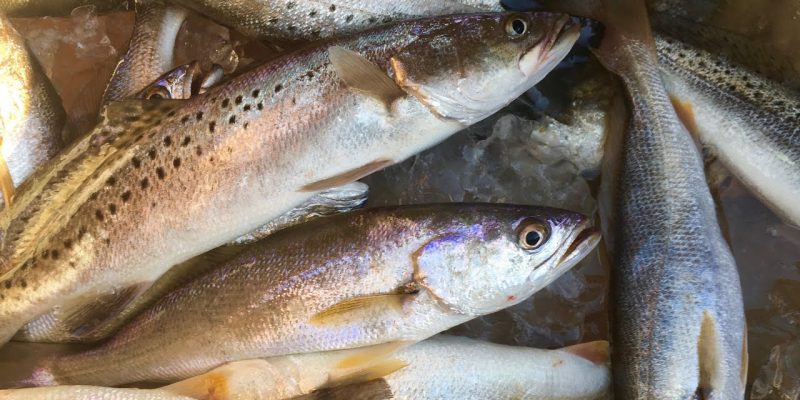 So rather than continue to wait for the fish to come to me, I decided to go to them. My longtime fishing buddy, Chris Macaluso, and I drove south to Louisiana’s only inhabited barrier island, the Jefferson Parish town of Grand Isle, to cast our lures in the salt and see if any lingering specks would take the bait.

On the morning of our trip, we hopped on board with Capt. Frank Dreher and scooted east to the remains of a structure that had delivered a few fish for Dreher the day before. Fortunately, the action was even better during our trip.

We got bites from speckled trout and white trout on every cast for a couple of hours until we had as many fish as we wanted to clean. The hottest bait of the day, by far, was a shrimp creole-colored Matrix Shad teamed with a 1/4- or 3/8-ounce Deathgrip Jighead.

On the way in, we made a stop at Queen Bess to survey a restoration project that will ensure the island remains a vital pelican rookery for a couple more decades. Although we didn’t catch any fish there, the island can be a speckled trout magnet during certain stretches of the spring and summer.

We also were treated to a display by two bottle-nosed dolphin that were feasting on hardhead catfish that had congregated to feast on the trout carcasses we threw in near the cleaning station.

All in all, it was an incredible day.

Like the video? Please give it a thumbs-up, and subscribe to the Marsh Man Masson channel on YouTube. Also, leave a comment below. Among many anglers, white trout are viewed as less desirable than speckled trout. What are your thoughts on the species? Do you keep whities when you catch them?

Interested in more news from Louisiana? We've got you covered! See More Louisiana News
Previous Article Yes, The Congressional Delegation Is Pulling Its Weight In The LAGOV Race
Next Article Who Does Donald Trump Endorse For Governor Of Louisiana?