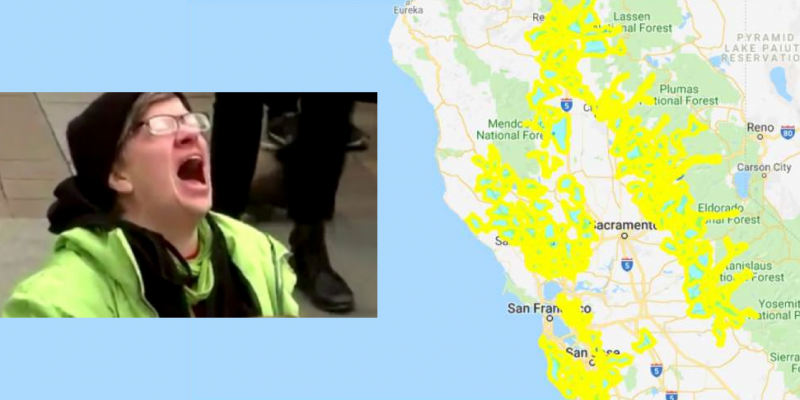 Rolling blackouts are taking place in Northern California today and possibly over the next week for 80,000 people. (Update: the count may be as high as 141,000).

No, the Golden State is not expecting record-high temperatures driving air conditioner use to historic levels. The temperature and the humidity are both around 77 at the time of writing in the affected areas.

And, no, the planned blackouts are not due to infrastructure failure or temporary outages due to new line construction.

The official reason is that in anticipation of strong and dry winds, PG&E (a major electric provider in Northern California) is turning off electricity in certain portions of the area (see map) as a preventative measure. As anyone knows, wildfires there have caused significant damage. A loose wire or spark from electric equipment could ignite undergrowth and dead foliage.

As it happens, six of California’s 10 most destructive fires have taken place in the past two years. Critics, including President Donald Trump, have pointed to decades of radical environmentalist policies that have allowed the woodlands to become overly dense — effectively unnatural tinderboxes.

Electric providers such as PG&E were blamed for the fires, leading to a sweeping new law signed by Gov. Gavin Newsom in July. The law set up a $21 billion (yes, with a “b”) fund to be contributed to by electric providers, followed by the selection of a new energy czar to oversee the new scheme. Lawsuits were immediately filed against the big bad electric companies.

Electric providers were counting on an appeal to be granted by the U.S. Supreme Court. However just on Monday, the High Court rejected another company’s (SDG&E) appeal that would have put ratepayers on the hook for $379 million wildfire damages near San Diego stemming from a 2007 fire.

Here’s where it gets difficult for PG&E: they’re currently undergoing bankruptcy proceedings, and under the new law they cannot access the $21 billion fund. Monday’s SCOTUS rejection left the company looking for a solution while facing forecasts of high fire danger weather conditions.

Under such financial straits, PG&E claims to be hamstrung from purchasing new technology that would identify and address wind damage to electric lines and facilities. (That did not stop the company from doling out nearly $11 million in executive bonuses in July.)

Meanwhile, electric providers as well as local governments and law enforcement agencies are urging residents to stock up on water and food and check up on neighbors and pets during the outages. Residents are being urged not to run electric generators inside homes as that would cause a buildup of carbon monoxide and other fumes.

From the hip: The perfect formula of government incompetence may end up resulting in more devastation that the wildfires themselves.

Ill-advised woodland preservation practices + a California Assembly and Governor blaming corporate America for its own sins + a culture of runaway litigation + the kind of corporate greed and financial mismanagement that comes along with a highly regulated environment (PG&E is one of but three major electric providers in California) = rolling blackouts covering the northern portion of America’s most populated state.

As a result, wages will be lost, food will spoil, appliances may break down, persons in sensitive medial situations will suffer, and traffic will be stalled. We are curious what the final estimate will be on the cost of these blackouts when all is said and done.

It’s a multi-layered mess involving all three branches of California state government. Nothing short of a total regime change can even begin to clean it up. Is it any wonder that half of Californians are planning on simply leaving?

Interested in more national news? We've got you covered! See More National News
Previous Article Reports: State rainy day funds are at an all time high
Next Article Flood Recovery Has Made Its Way To The Forefront In The LAGOV Race