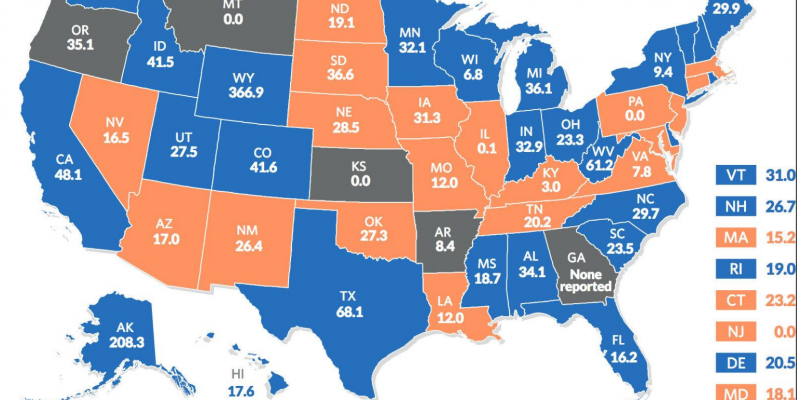 State government rainy day funds are at their highest levels since before the Great Recession, according to analyses by the National Association of State Budget Officers (NASBO) and The Pew Charitable Trusts.

Some states have grown their savings significantly while others have improved their savings policies to strengthen their reserves, such as Arizona, Nebraska, Montana and Texas, Pew notes.

“Overall rainy day fund balances have never been higher,” according to NASBO. The association evaluated data from the spring survey of state fiscal conditions, which notes that states’ fiscal conditions may be better than the survey conclusion because the survey was finalized before some states budgeted additional deposits.

Higher-than-expected revenue growth left several states with budget surpluses at the end of fiscal 2018 stemming from the 2017 Tax Cuts and Jobs Act.

“Anticipating some of those gains may be temporary or one-time in nature, some invested a portion of the extra cash in their rainy day funds; a few added to their savings accounts for the first time in years,” according to the Pew Charitable Trusts.

In July 2019, Pennsylvania announced its first deposit to its rainy day fund since 2006. Kansas created its first rainy day fund in 2016, and put a plan in place this year to fund the account if revenue exceeds projections in 2020, 2021 or 2022.

In fiscal year 2008, immediately prior to the downturn, the 50-state median rainy day fund balance was equivalent to 4.8 percent of expenditures, according to a new analysis published by The Pew Charitable Trusts examining state governments’ rainy day funds. Now that number has reached 5.5 percent, but many still lag behind, with the bottom half of states saving only 3 percent of expenditures.

Three states also improved their savings policy structure in fiscal year 2019, according to the report. Arizona increased the maximum size of its rainy day fund and Nebraska added a savings rule to put aside additional dollars during periods of especially high revenue growth. Texas modified its investment rules to see a greater earnings return from its fund balance.

Both Montana and Nebraska passed laws requiring their fiscal analyst offices to “stress test” the annual budget, using various revenue and expenditure scenarios to determine the next recession’s potential financial impact. They followed similar measures implemented by Utah and Minnesota legislatures that regularly assess their preparedness.

“States are being more deliberate about their savings, often harnessing the ebbs and flows of the business cycle to guide their strategy,” the report states.

“Typically, a state’s recession readiness can be measured by the amount of cash it has in reserve,” they explain. Governments use rainy day funds to help offset budget gaps, in addition to or instead of cutting spending or increasing taxes.

Despite the unprecedented improvement, Pew notes that some states may not be as prepared for the next recession as they think and observes three trends indicating state governments need to put aside even more to weather future economic downturns.

Pew notes that growing fixed costs, specifically Medicaid, could reduce state budget flexibility in addition to reduced spending levels, which have still not recovered from the Great Recession. Both make new cuts even more difficult in economic downturns. Additionally, increased revenue volatility, especially with recent revenue growth and sources that are susceptible to the “ups and downs of the business cycle,” give reason for states to be cautious, Pew notes.

Spending commitments like debt service and state retirement system contributions, and federal-state programs like Medicaid and the Children’s Health Insurance Program, fall into this category. Medicaid spending also tends to increase during a recession, Pew notes, as more people become eligible due to economic hardships, increasing costs for states when they can lease afford it.

One way to cut spending is to reduce waste, fraud and abuse, critics note, including ongoing waste in Medicaid programs nationwide.

About 500,000 people enrolled in Medicaid through expansion in nine states were ineligible, a study published by the National Bureau of Economic Research (NBER) found.

According to the Foundation for Government Accountability (FGA), among the 12 states that did not expand Medicaid, more than half of potential enrollees already have private coverage or have access to a low-cost Marketplace plan.

“A clear trend is emerging as more research is published: Medicaid expansion opens the program to rampant fraud and abuse,” Kristina Rasmussen, vice president of federal affairs at FGA, told The Center Square. “Medicaid is already facing funding and budgetary challenges. When states begin enrolling adults with no disability keeping them from working, those challenges grow and cost billions of dollars.”

In fiscal year 2000, Medicaid spending represented 12.2 percent of total state spending. That grew to 17.1 percent by fiscal 2016, according to Pew’s analysis of data from the Centers for Medicare and Medicaid Services.

Second only to K-12 education in terms of state spending, if no reforms are implemented and spending continues as is, Medicaid will take up a greater share of resources over time, according to the Pew analysis.

Interested in more national news? We've got you covered! See More National News
Previous Article Why Are We Critical Of Eddie Rispone’s Campaign? This Is Why.
Next Article Stephanie Grace And The Intolerable Political Bias Of The Advocate