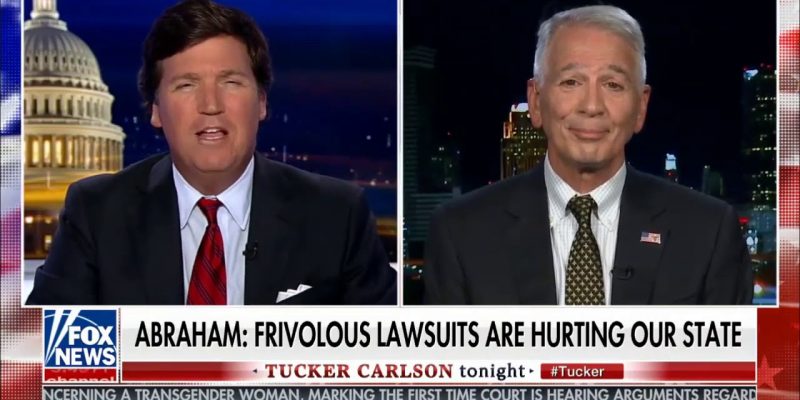 Matt Howerton has a rundown of the goings-on on Capitol Hill yesterday, complete with President Trump’s political nuke of a letter to Nancy Pelosi and Ralph Abraham’s call for her to be expelled from Congress. Abraham ended up with a Fox News hit yesterday – an interview with Tucker Carlson which might have been his Louisiana gubernatorial campaign’s best moment in a while…

They didn’t discuss the expulsion demand in the interview, but it’s pretty likely Abraham’s call for Pelosi to go away was the reason it aired. He was in the news yesterday, after all, so it was a good time to break that interview out of the can.

Was calling for Pelosi to be sent packing a good move? Was it a responsible move?

Well, as a matter of governance it was an inevitable move. To every action is an equal and opposite reaction – that’s basic physics. So when Pelosi unilaterally begins an impeachment investigation, it was inevitable that someone on the Republican side would begin the process of attempting to expel her from Congress. Abraham is the guy among the House Republicans who’s running for governor back home right now, so of course it ought to be him.

If there are never any consequences to people like Pelosi or Fat Jerry Nadler or The Bug-Eyed Clown Adam Schiff, then their behavior will continue to get worse and worse until this country tears itself apart. So sure – it’s a futile gesture to demand Pelosi’s expulsion, because that won’t happen, but as a matter of necessity it was proper for someone to do it, and Abraham had the most to gain by it, so there is nothing out of bounds in his introducing that resolution.

Politically, in terms of the governor’s race, it’s also an appropriate and expected move.

The most obvious reason, beyond the general fact that doing this gets Abraham attention, is that for the last two weeks the airwaves in Louisiana have been full of Rispone ads claiming that he’s voted with Pelosi 300 times.

Abraham doesn’t have enough money to counter those ads, and that’s something of a shame because the accusation is idiotic. The vast majority of votes you make in Congress are on things which aren’t controversial. Some procedural matter of no import, or naming a post office in Snohomish, Washington after some Indian chief, or whatever. Those votes are eminently skippable, and Abraham has skipped a lot of them while he’s been campaigning for governor, but prior to the campaign getting rolling he made them. And yes, he voted with Pelosi – just as Mike Johnson, Clay Higgins, Steve Scalise and Garret Graves did. And as Jim Jordan, Mark Meadows, Lynn Cheney and whoever else you want to put forth as the conservative tigers in the House did. Because those votes aren’t controversial.

It was a dishonest, deceptive attack, and Abraham’s best way to answer it if he doesn’t have the money to fight back with TV ads is to go over the top of that ad with a gesture that proves he’s no friend of Nancy Pelosi. So Abraham has now answered Rispone’s ad by saying “you’ve now accused the guy who publicly called for Pelosi to be thrown out of Congress of being her pal.”

But it turns out Abraham didn’t actually get good press out of doing it. At least, not in The Advocate, whose mouth-breathing left-wing screecher Stephanie Grace launched into an attack on him for his resolution…

I guess we’ve entered the stunt phase of the governor campaign.

How else to explain the fact that Republican U.S. Rep. Ralph Abraham, who has missed boatloads of votes in Washington to be on the campaign trail in Louisiana, is suddenly focused on his day job?

The urgently pressing matter that turned his attention back to Washington hasn’t anything to do with his north Louisiana district, or with major matters of state. It’s that the Democrats won a majority in the House last year and elected a speaker named Nancy Pelosi.

That’s the system, one that would have worked out quite well for Abraham’s Louisiana colleague Steve Scalise had the 2018 vote gone the other way. Democrats would have had no say over Scalise’s ascent to majority leader or even speaker, just as Republicans don’t get to pick Democratic leaders. Nor do they get to remove them for hyped-up alleged infractions.

Yet that’s what Abraham is now proposing to do. With just days left before Louisiana voters decide whether he’ll eke into a runoff against Gov. John Bel Edwards, Abraham has filed a resolution calling for Pelosi to be expelled from the speakership — and from Congress. Her alleged firing offense? Overseeing an impeachment inquiry into the very real, and very serious, allegations swirling around President Donald Trump’s dealings with Ukraine. In other words, doing what the U.S. Constitution says the House can and should do when such concerns arise.

Abraham’s proposal is ridiculous, of course, and it reeks not of righteousness but of last-minute desperation. He and fellow Republican Eddie Rispone are neck-and-neck for a second place, according to polls that also give Edwards a shot at winning Saturday’s primary outright and rendering the identity of the runner-up moot.

Will Abraham’s move make a difference to voters who’ve been watching the two Republicans play Trumpier-than-thou for weeks now? Unlikely. And it could come back to bite him should he return to Congress full time and at some point need something from the House’s leadership.

It’s obnoxious enough that Stephanie Grace has appointed herself water-carrier for Nancy Pelosi, who might well be the most unpopular politician of all among Louisiana voters. What’s even more obnoxious is that she would attack Abraham for a “stunt” to get media attention.

Hey Stephanie, if Abraham is reduced to political stunts to get attention in this campaign, maybe you and your paper ought to take some responsibility for that.

How heavily has The Advocate covered John Bel Edwards’ record as governor? When the numbers came out and Louisiana was the only state in America to lose jobs from July 2018 to July 2019, The Advocate reported the story as a petty political fight between Republicans, who pointed out that the seasonally-adjusted figures showed a loss of 1,000 jobs, and the Edwards camp, who touted the non-seasonally-adjusted numbers which showed Louisiana gaining 4,800 jobs. It wasn’t until a week later when the only conservative columnist at the paper, Dan Fagan, reported the truth – that Louisiana had the worst job performance in the country.

That’s a consistent pattern of biased coverage, by the way. The Advocate also reported as a petty political fight Jeff Landry’s refusal to sanction Larry Bankston’s contract to be the executive counsel for the State Licensing Board of Contractors, a position Landry took because Bankston is a convicted bribe-taker (and Landry was proven right when Bankston proceeded to blow up the program manager contract for the Restore Louisiana flood recovery under quite suspicious circumstances). Virtually everything Tyler Bridges writes at that paper is so loaded with partisan bias it isn’t even funny. Mark Ballard not long ago editorialized that Edwards’ campaign has “operated flawlessly” in what was supposed to be a straight journalism piece.

And Abraham’s campaign gets virtually no coverage from that paper at all. It has been, frankly, amazing to see how thorough The Advocate has been in denying his campaign earned media. That hasn’t been so notable with Rispone, largely because his campaign hasn’t been so active with respect to press releases and social media posts designed to get attention – he’s bought close to $10 million in TV ads, and that’s his campaign. Give Rispone credit – perhaps his people had a better read on the landscape than Abraham’s people did and realized it was a waste of time trying to get The Advocate to do its job. That the paper endorsed Edwards on the same day its Outdoors writer completely trashed his administration with respect to its wildlife and fisheries department was more or less proof of how hopeless all of this really is.

The lack of coverage has been so comprehensive that it’s dragged in Louisiana’s congressional delegation, which has endured griping from Republican activists and donors for not being helpful enough. Members of the delegation are beyond irritated by that characterization, as they’ve been highly critical of Edwards’ administration for more or less its entire duration – but the state’s media, of which The Advocate is now the leading organ, hasn’t covered it. For example, Mike Johnson wrote a 5,000-word treatise giving chapter and verse for what an atrocious job John Bel Edwards has done as governor and why he can’t be re-elected; it appeared here at The Hayride. There was not a single mention in The Advocate’s pages about that, which was a legitimate newsmaking event.

So after doing everything it could not to provide balanced coverage of the governor’s race, so much so that when The Advocate’s publisher John Georges went on Moon Griffon’s show as a guest he found himself blistered by the host over the bias and incompetence the paper has shown in this race.

So yeah – maybe Ralph Abraham is desperate for media attention and maybe he is engaging in political stunts to get it. But maybe that says a whole lot more about Stephanie Grace and the terrible newspaper she works for, and the quality of the jobs they’re doing, than it does about Ralph Abraham.

Interested in more national news? We've got you covered! See More National News
Previous Article Reports: State rainy day funds are at an all time high
Next Article APPEL: I Agree, Nothing Has Changed With John Bel Edwards