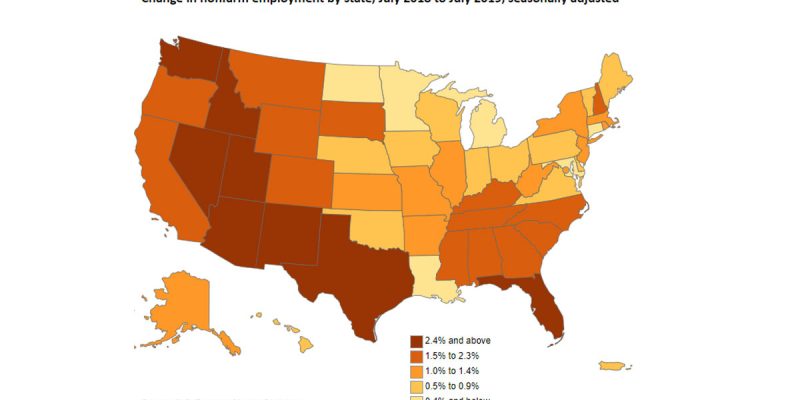 A minor controversy broke out Friday after the Bureau of Labor Statistics put out their jobs report for the month of July, and that controversy was more than a little instructive as to how desperate Gov. John Bel Edwards is to hide his abysmal record in advance of this fall’s elections and how determined The Advocate, and its state politics reporter Tyler Bridges, is to help him.

By the reckoning usually used in the BLS’ jobs report, Louisiana is down 1,000 jobs from July 2018 to July 2019. That would be the nonfarm seasonally adjusted job numbers, which is the standard the BLS usually uses.

But Edwards’ team used the unadjusted numbers, which had the state up by 4,800 jobs, and crowed about how well Louisiana’s economy is doing. And that’s what Bridges focused on.

“At a time when Louisiana should be taking advantage of a strong national economy to grow jobs and expand opportunity, John Bel Edwards’ liberal tax-and-spend agenda is moving the state in the wrong direction, and working families are the ones paying the price,” Amelia Chasse Alcivar, a spokeswoman for the Republican governors, said in a press release.

“It’s just another example of John Bel Edwards’ failed leadership in Louisiana,” said Anthony Ramirez, a spokesman for Rispone. “We need a conservative outsider like Donald Trump to create jobs. That’s exactly what Eddie Rispone will do.”

Said Abraham through a spokesman: “There’s no way to spin it: John Bel Edwards is a complete failure. Help is on the way.”

The seasonally adjusted numbers showed that, compared to a year ago, Louisiana has more jobs in education, leisure and hospitality but fewer jobs in construction and government.

Meanwhile, however, the Edwards administration emphasized the seasonally unadjusted numbers for the past year, which showed the creation of 4,800 nonfarm jobs.

Administration officials also emphasized a separate measure, the unemployment rate, which is 4.3%.

“Louisiana continues to see its lowest unemployment rate in 11 years, which, when paired with our highest GDP and personal income on record, is good news for Louisiana,” Edwards said in a statement. “Between a stabilized budget with a modest surplus and attracting thousands of jobs to the state through our aggressive economic development efforts, Louisiana truly is headed on the right track.”

The controversy misses the point. Whether Louisiana gained a few jobs or lost a few isn’t really the issue. The fact is the national economy has been on fire for the last year and every state in the country has been a beneficiary of the country’s rolling prosperity. That applies to Louisiana as well, which is why the economic numbers the state has spat out over the past year are better than they were before the Trump economy got rolling.

What people ought to be looking to isn’t what Louisiana is doing with respect to job creation in raw numbers, but rather as a comparison to what our neighbors are doing. Because that’s where the catastrophe lies.

The non-seasonally adjusted numbers put Louisiana in the positive, but check out how the state fares compared to other southern states…

So here is John Bel Edwards and his team boasting about how the state’s jobs numbers are (arguably) a little bit up if you look at the numbers in just the right light, and here is Tyler Bridges at the Advocate running a story Friday about how the mean Republicans are attacking him on the basis of a different interpretation of the numbers.

And instead what’s the truth is it doesn’t matter what set of the BLS’ numbers you use, because by any measure Louisiana has the worst job performance in the entire South.

Mississippi created 24,000 jobs while Louisiana created 4,800, for Pete’s sake. When Mississippi creates five times the number of jobs you do, by the most favorable possible interpretation of the data, you have hit virtual rock bottom.

There’s something else. Louisiana’s civilian labor force, using seasonally adjusted numbers, sat at 2,095,781 for the month of July 2019. That’s down from 2,102,417 the previous July. Your civilian labor force is not supposed to shrink. Edwards’ camp is bragging about a 4.3 percent unemployment rate, but when your unemployment rate shrinks because your population of people in the labor force shrinks, rather than there actually being more jobs for them to do, it’s not something you can take much pride in.

How does Louisiana’s shrinking labor force compare to our southern neighbors?

Here’s a chart, from the BLS’ data, comparing the change in labor force, and the change in unemployment, from July 2018 to July 2019…

Louisiana is the only state in the South with a shrinking labor force, and the second-worst unemployment rate in the region to Mississippi, which it turns out is actually creating jobs while we are not.

But Edwards is crowing about the unemployment rate coming down, while it’s still a point higher than Florida and Texas which are taking people in and putting them to work at 100 miles an hour.

Under no interpretation of these numbers is John Bel Edwards’ record anything but a disaster. That is plainly, painfully obvious in the context of a side-by-side comparison with our southern neighbors. Except The Advocate’s Tyler Bridges chose to focus not on the obvious failure by comparison to other states but instead on which set of numbers to use and the back-and-forth discussion by political operatives.

That’s called hiding the ball from the public, and The Advocate has become awfully good at it. The question is whether Bridges and his paper can continue doing it all the way to Election Day.