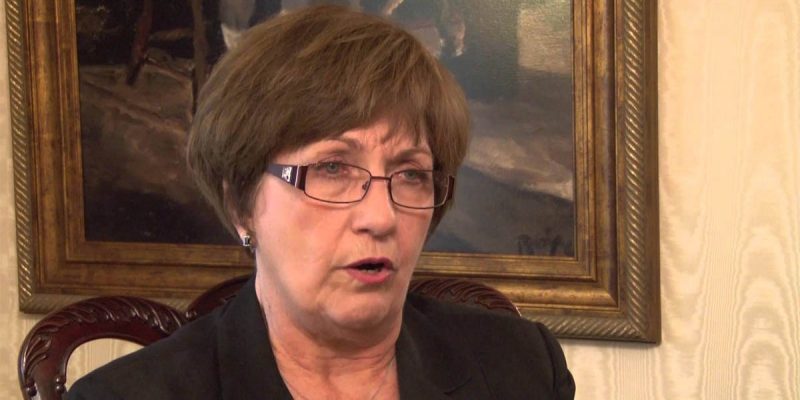 A few years ago I went on a pilgrimage to the village of Lourdes in southern France. One of the rituals for Catholic visitors is being immersed in healing spring waters from the grotto where Catholics believed the Blessed Virgin appeared to St. Bernadette.

In fact Al Copeland, Popeye’s founder and fried chicken king of New Orleans, made a point of going to Lourdes as he was battling cancer.

Many pilgrims make a point of not just taking the extremely cold dunk (it’s not a bath) but also bottling some of the miracle water to bring to ill friends back home.

Before leaving southern France I made a point of buying several small vials and collecting Lourdes water.

After giving some of them out I had a couple left with water (some were now empty due to evaporation).

One day I read in the newspaper what was in essence Governor Kathleen Blanco’s farewell message to the state she served in varying capacities for three decades.

Rather than being a recounting of what she accomplished in the offices she held for the sake of posterity it was a statement of appreciation to the people of Louisiana and recounting of blessings.

Blanco wasn’t putting her political narrative in order but her soul.

It stands out as one of the most proper public displays of religious faith by a public figure in my time in politics.

Though I campaigned very hard for her opponent and was very critical of her management of the Katrina crisis, I could not help but be greatly moved by her testament of faith and humility and set about trying to find a way to get her one of the remaining bottles of Lourdes holy water.

As luck would have it the former head of the state’s women Republicans was friends with the Democratic ex-governor and put me in touch with her husband.

Not knowing her condition at the time and intending to just deliver the vial, I asked Coach Ray if it he wanted me to leave it either on their porch or in their mailbox. He insisted that I bring it over personally.

Having just left a GOP meeting, I visited their home and there was the former governor frail yet still possessing exact poise. After exchanging pleasantries and giving Mrs. Blanco the Lourdes water it occurred to me that I was not so much standing before a one-time “power couple” but an aged Cajun husband and wife, lacking any sense of pretentiousness and radiating authenticity.

And that was perhaps the secret to Governor Blanco’s success in the voting booth. Nobody saw her coming because she wasn’t like the other politicians.

As for her critics, for I was as loud as any, I will offer two things that most folks take for granted that were major components of Governor Blanco’s post-Katrina brick-and-mortar recovery legacy.

The first was the Superdome. My heart sank when Ted Koppel recklessly speculated that the battered stadium would have to be torn down as water still inundated the city.  Despite having had a tempestuous relationship with cantankerous Saints owner Tom Benson, the two put their acrimony aside and the dome amazingly reopened just over a year after the storm.  And nothing did more to signal to the world that NOLA was truly on the road to recovery more than that Monday Night Football game.

The Saints organization dedicated a part of the stadium in her honor and officials with the Saints Hall of Fame presented her with their annual Fleur de Lis award (for more on this, read Ken Trahan’s recounting of the ceremony). Both well-deserved tributes.

The second is the I-10 twinspan over Lake Pontchartrain. Though it bears the name of local celebrity outdoorsman Frank Davis, it was the Blanco Administration that launched the construction of the $800 million project (one of the most expensive public works projects in state history) that is the finest roadway in the state and an essential element for commerce and commuters. Regardless of whom it’s named for, I will always associate that bridge with Governor Blanco.

The ill-will I harbor towards her administration is aimed not at the governor but staff members who decided to play partisan games during what was a humanitarian crisis.  Being overwhelmed in the face of an unprecedented disaster is forgivable; putting politics over people trapped in attics and on roofs is not.

Policy and personnel differences aside, nobody could credibly challenge Governor Blanco’s love and dedication to our state.

Though Governor Blanco will forever be linked with Hurricane Katrina, Kathleen Babineaux Blanco should be remembered as a trailblazing female politician, a faithful servant to Louisiana, and a sincere Christian woman who lived her faith.

Interested in more news from Louisiana? We've got you covered! See More Louisiana News
Previous Article Louisiana’s Jobs Report Is The Worst In The South, No Matter How It’s Spun
Next Article How Big A Deal Was It For Ralph Abraham To Get The PEC Endorsement In Jefferson On Saturday?