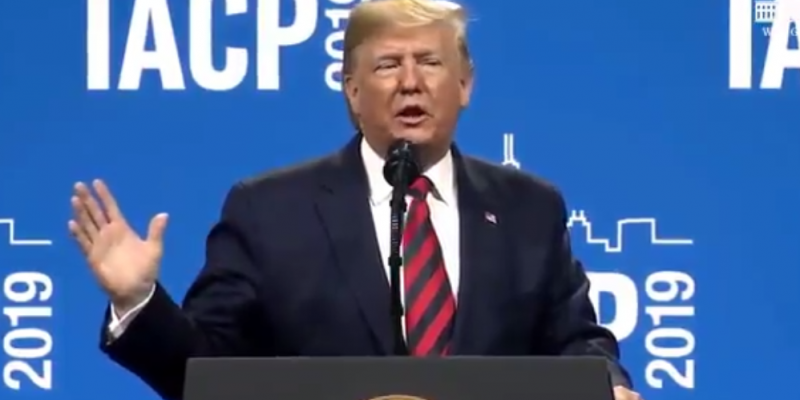 President Donald Trump said Monday that gun violence in Chicago was embarrassing to the U.S. Afghanistan is  safer than Chicago because of its “Sanctuary City” laws.

Trump just claimed ‘Afghanistan is a safe place’ compared to Chicago — in a room full of Chicago police officers pic.twitter.com/xs2zxKYXm0

Speaking before the International Association of Police Chiefs at McCormick Place in Chicago, Trump chastised the city’s Police Superintendent Eddie Johnson, who skipped the event.

“Here’s a man who could not bother to show up to a meeting of police chiefs, the most respected people in the country, in his hometown,” Trump said. “And you know why? It’s because he’s not doing his job.”

#NEW: Pres. Trump slams Chicago Police Superintendent Eddie Johnson for boycotting his speech at a conference of police chiefs in Chicago, and says he's not doing his job to protect his city against violent crime. pic.twitter.com/tBE3DFKV3H

Trump called Chicago the worst sanctuary city in America, saying Chicago is an embarrassment to America.

“it’s embarrassing to us as a nation. All over the world, they’re talking about Chicago. Afghanistan is a safe place by comparison. It’s true,” he said.

Trump spoke for over an hour and was joined by local and national law enforcement leaders, including U.S. Attorney General William Barr.

Trump also signed an executive order while in Chicago to create a new executive Commission on Law Enforcement and the Administration of Justice. The commission will address key issues facing law enforcement, including gun violence.

“The best way to reduce gun violence is to put criminals with firearms behind bars,” Trump said.

The president also thanked the law enforcement leaders who attended.

“You have no idea how much the people of this country love you and respect you,” he said.

"Today, the same police officers the president criticized for their inability to protect this city spent all day protecting him." https://t.co/dRtnBYYbLN pic.twitter.com/rzXitAkkfI