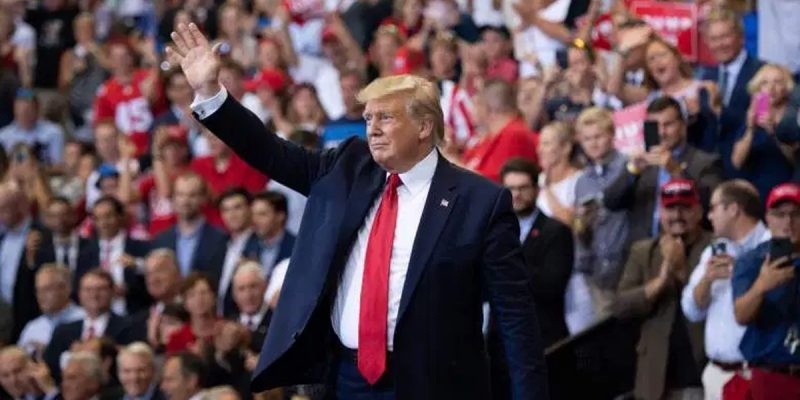 UPDATE: It’ll be on Wednesday, per the official announcement…

“Because of President Trump, working families in Louisiana are benefiting, with the average Louisianan seeing a tax cut of $1,300 thanks to President Trump’s tax cuts,” said Michael Glassner, Chief Operating Officer of Donald J. Trump for President Inc. “President Trump negotiated the USMCA, which is critical for Louisiana’s farmers and manufacturers, and he has been an undeniable ally of Louisiana’s energy industry. President Trump looks forward to celebrating these successes with the people of Louisiana.”

ORIGINAL POST: A deal was cut which should impact the Louisiana governor’s race in a way which might be decisive for Eddie Rispone. Namely, that President Trump is going to be in Monroe – the heart of Louisiana’s 5th Congressional District, represented by one Ralph Abraham – one day next week for a rally for Rispone, with Abraham serving more or less as the host.

President Donald Trump is tentatively planning to travel to Monroe, Louisiana, next week to headline a rally for Republican governor’s candidate Eddie Rispone, sources with direct knowledge of the plans have told USA Today Network.

Those sources said plans could still change and haven’t yet been confirmed by the White House.

Details on the time and place of the rally are still developing, but Monroe Mayor Jamie Mayo said the Secret Service has contacted the Monroe Police Department ahead of the visit. “We will welcome the president with open arms,” Mayo said.

Trump has promised to return to Louisiana before the Nov. 16 runoff election, but hasn’t yet announced his destination.

Republican Congressman Ralph Abraham, of Alto, who finished third to Democratic Gov. John Bel Edwards and Rispone in the Oct. 12 primary, asked that Trump visit Monroe, the heart of his 5th Congressional District.

The president had originally planned to visit Shreveport before Abraham interceded, sources said.

So Abraham gets what he wants, which is that he’s the congressman who brings the President of the United States down to the 5th District for the first time since…gosh, who knows?, and Rispone gets, one would imagine, Abraham to embrace him in front of the local folks in that district where Abraham ran so strongly in the Oct. 12 primary.

This matters because Rispone and Abraham combined for 51 percent of the vote in the primary, and if you combine their votes plus insure that Republican turnout is at least what it was on Oct. 12 in the runoff, the race is over and Rispone is Louisiana’s next governor.

Rispone needs to pull Abraham’s voters across the line. Polling indicates he’s done that with a large majority of them; 80 percent or so. Getting the last 20 percent means all he has to do is turn out that vote and he wins.

So Abraham shows up at the rally, which is a huge, huge deal in the northeast corner of the state where Abraham is wildly popular and so is Trump, and Rispone isn’t as well known, and Abraham reiterates his endorsement of Rispone and echoes what Trump says about the necessity of getting rid of Edwards.

And this happens after Edwards has spent the better part of a million dollars in North Louisiana running an ad which attempts to drive a wedge between Abraham’s supporters and Rispone using footage from the third primary debate where Abraham castigates Rispone for attacking him.

Word we heard also had it that Edwards’ camp had been circulating talk that Abraham and Edwards had quietly made their peace and Abraham wasn’t going to help Rispone in the runoff.

Both of those would obviously go up in smoke and really paint Edwards as a lying snake if Abraham speaks at that rally with a wholehearted endorsement of Rispone.

Here’s something else we heard which is a bit of inside baseball about this race. We didn’t cover the news a week or so ago about veteran Louisiana Democrat operative Scott Arceneaux, who most recently was the get-out-the-vote specialist for Andrew Gillum’s failed gubernatorial bid in Florida and who also performed those functions for Hillary Clinton’s failed 2016 presidential campaign, being brought in to pump up turnout for Edwards in the runoff. Arceneaux had also worked Edwards’ 2015 campaign as a GOTV specialist.

But what we understand is that Arceneaux picked up $450,000 from the DLCC, which is the Democratic Legislative Campaign Committee, the Democrats’ fundraising arm for state legislative candidates, to do GOTV for Edwards – and what he’s doing with that money is doling it out to members of Louisiana’s Legislative Black Caucus to energize their machines to get the vote out.

And a couple of veteran politicos we talked to told us that might be the most wasteful and ineffective thing Arceneaux could possibly have done with that money. First two reasons – first, Edwards’ relationship with the Black Caucus has never been close, and second, many of the Black Caucus members didn’t turn out much vote in the primary when they were on the ballot themselves, much less for Edwards in the runoff when they’re done.

It’s safe to say these developments don’t help Edwards, whose campaign has taken on an even more unstable feel after last night’s debate meltdown. Louisiana is a red state, after all, and to win he has to peel off Republican votes. As Election Day nears for the general election the sources for that vote appear to be shrinking, and Trump’s arrival in Abraham Country to stitch together that GOP coalition has more impact to it than anything Edwards has in his quiver.

Interested in more national news? We've got you covered! See More National News
Previous Article Audit: Dead people have been collecting billions from Social Security as it goes bankrupt
Next Article News, Notes And Video From Around The Louisiana Election Scene