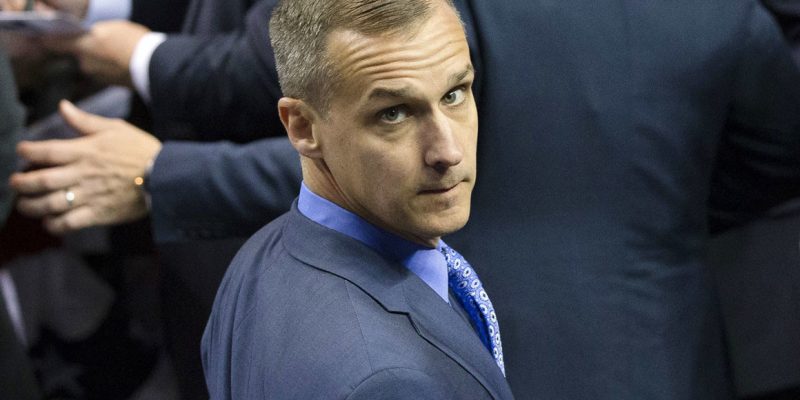 Corey Lewandowski is coming to Lake Charles! Make sure you don’t miss him on October 9!

Join us at Pujo Street Cafe on the corner of Pujo and Ryan Streets for the Lake Charles stop of The Hayride’s 2019 @Large Tour! Our happy-hour cocktail reception will begin at 5:00 p.m. and continue until 7:30 p.m., with a VIP dinner at Vic & Anthony’s Steakhouse, located inside the Golden Nugget Casino & Resort, beginning at 8:00 p.m.

Lewandowski will surely be a treat to the audience. He’s an announced candidate for the U.S. Senate in New Hampshire, and currently serves as a Senior Advisor to Vice President Pence’s PAC, the Great America Committee.

Perhaps most notably, Lewandowski was both Chief Political Adviser and Campaign Manager to Donald J. Trump for President, Inc.  In those roles, he oversaw all aspects of a historic presidential campaign where Donald J. Trump won 38 Republican primaries and caucuses, and received more votes than any presidential candidate in the history of the Republican Party.  Through Mr. Lewandowski’s leadership, Mr. Trump secured the Republican nomination for President of the United States while only spending a fraction of the money his competitors spent over the same period of time. Mr. Lewandowski is credited with running a skillfully disruptive political campaign and is often cited as a visionary on understanding the moods and pulse of the American people.

Prior to his tenure at AFP and AFP Foundation, Mr. Lewandowski served as Executive Director of the New England Seafood Producers’ Association (NESPA), representing the vast New England seafood interests to state and federal government officials.

Mr. Lewandowski worked as the Legislative Political Director, Northeast Region, for the Republican National Committee (RNC), as well as in senior positions with several Members of Congress.

Mr. Lewandowski has made numerous, regular appearances on Fox News, Fox Business, ABC, NBC, MSNBC, CBS and CNN, as well as serving as a on-the-record spokesman to major print outlets such as the Wall Street Journal, the Washington Post, the New York Times, USA Today, The Guardian, The Daily Mail, the Boston Globe, and numerous other print and on-line publications. He was also named “Power Player of the Week” by Fox News Sunday for his contribution to the Trump campaign.

But we don’t just have Corey Lewandowski set for the Hayride’s Lake Charles event. Attorney General Jeff Landry is also stopping in as a special guest! Previous Hayride event attendees know that Landry is perhaps the most electrifying political speaker Louisiana has to offer, and with the October 12 election just days away he’s certain to be a show-stopper as well.

Oh, and the reception will include an open bar.

Register today, and we’ll see you on October 9!