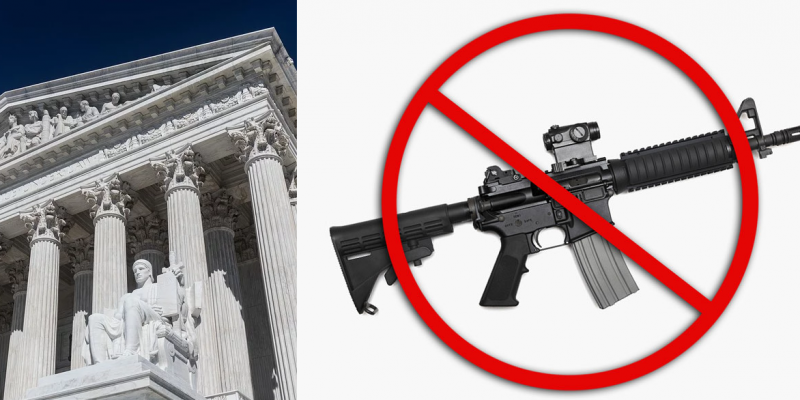 All that’s missing are pre-2005 barrages of lawsuits from anti-gun activists.
This morning the U.S. Supreme Court decided 4-3 it will not hear Remington v. Soto, which means plaintiffs such as the Sandy Hook families may continue to sue firearms manufacturers for alleged aggressive advertising by firearms manufacturers.
In an order issued this morning, the High Court agreed parties may still sue Remington for allegedly marketing firearms to young men, which hypothetically includes the Sandy Hook shooter. The shooter abused his mother’s Remington AR-15 to take the lives of his mother and 20 schoolchildren, and injure six adults in Newtown, Conn., in 2014.
A print advertisement highlighted by the anti-gun Sandy Hook parents was for Bushmaster, which featured an image of the rifle along with the slogan “Consider your man card reissued.”
In today’s Court order, Justices rejected Remington’s assertion that they and fellow manufacturers are not liable for choices made by those who purchase their firearms.
Previously in March, Remington had lost a case before the Connecticut Supreme Court regarding the state’s strict laws regarding “unfair trade practices.” Remington pointed to a 2005 federal law signed by George W. Bush, the Protection of Lawful of Commerce in Arms Act (PLCAA), that protects gun manufacturers from continual lawsuits by anti-gun activists. Remington’s appeal to the Supreme Court was in hopes of reversing the state Supreme Court decision, which was closely divided (also a 4-3 decision).
ANALYSIS: The Supreme Court’s action, while it does not overturn the 2005 PLCAA, tests the parameters by which states may allow such gun marketing and commerce lawsuits to continue. This will make marketing firearms difficult in states with strong anti-gun leadership. In Connecticut in particular, a state statue covers “unfair trade practices” in general, which may all-but freeze gun sales activity in one of the original 13 colonies that won our Second Amendment freedoms at the end of a musket.
This may open up a future High Court ruling on the extent of the 2005 PLCAA, but for now we can expect state-by-state solutions to vary. A Supreme Court review of PLCAA will not come soon, as another prominent gun rights case is on the docket to be heard in December regarding the transportation of legally owned guns in New York City.
This article also appeared in International Sportsman.
Interested in more national news? We've got you covered! See More National News
Previous Article SCHEXNAYDER: The Troubling Murray Starkel Allegations Bear Further Investigation
Next Article Now There’s Another Murray Starkel Ad Running In New Orleans