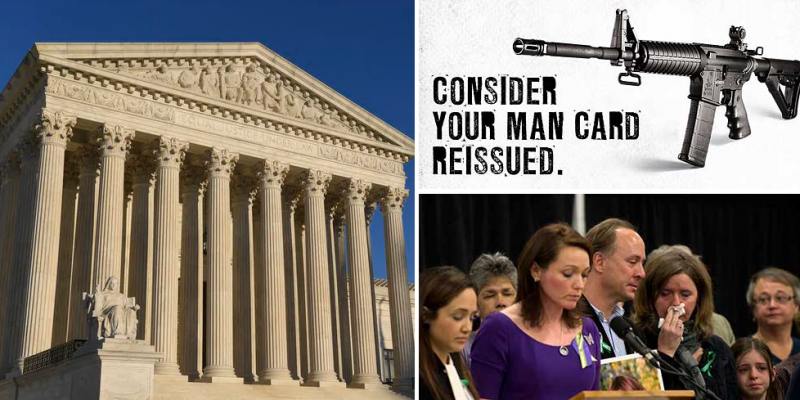 The U.S. Supreme Court will determine whether to hear Remington Arms Co. v. Soto, a high-profile case featuring the families of those killed in the Sandy Hook shooting versus the venerable American firearm institution.
In the cross hairs: “America’s Rifle,” the AR-15, which was (mis)used during the Sandy Hook mass shooting.
If taken up, Remington could become one of the widest-reaching firearm manufacturing cases in a decade, since the Court took up DC vs. Heller in 2008. Heller upheld individual self defense as part of the Second Amendment.
The High Court will consider whether to take up the case as soon as Friday, in which the nine Justices will determine whether Remington is legally liable for producing and marketing their variant of the AR-15 that was used in the horrific Sandy Hook shooting in December 2012 in which 20 first-graders and six teachers were killed.
As it stands now, firearm manufacturers are not on the hook when it comes to legal culpability in the aftermath of a shooting, even one as terrible as Sandy Hook or the El Paso mall. A ruling in favor of defendants associated with the Sandy Hook families could change that.
The Sandy Hook parents are calling into question a 2005 law signed by President George W. Bush (see details below) protecting gun manufacturers from legal liability when weapons they built are used in crimes. The Sandy Hook families are arguing that the state of Connecticut has an unfair trade practices statute on the books that can be used to go after Remington. In their viewpoint, the AR-15 was marketed to young men like the Sandy Hook shooter a la violent video games and advertisements.
Here’s a little background on the 2005 law: Congress passed the bipartisan Protection of Lawful of Commerce in Arms Act (PLCAA) by a whopping two-thirds vote. It was intended to stop then-efforts by gun control advocates to sue gun manufacturers en masse. This put a stop to an abuse of the judicial system by gun control advocates.
Fast forward to 2014 and Sandy Hook: the parents and their anti-gun backers were looking for any loophole they could find. They honed in on the fact that the Sandy Hook killer chose a Remington AR-15 from his mother’s personal collection, presumably because of advertisements (not because of its weight, lack of recoil, mechanical reliability, or other virtues of the rifle). One such advertisement, the Sandy Hook parents claim, was for Bushmaster, which featured an image of the rifle along with the slogan “Consider your man card reissued.” Exploiting a strict Connecticut unfair trade practices law, the Sandy Hook cabal won their case all the way to the state supreme court, which was sharply divided.
Remington is now petitioning the U.S. Supreme Court to review the Connecticut decision and restore the scope of PCLAA’s protections to what Congress allegedly intended.
Analysis: Here are a few scenarios that could come out of Friday’s action (or inaction) by the Supreme Court:
Scenario A: SCOTUS refuses Remington’s appeal. Since Remington lost their case at the Connecticut state supreme court, that decision will provide a road map for future litigants to sue gun manufacturers. A marketing loophole will have been created that will lead to the around-the-clock lawsuits that threatened to effectively shut down the firearms manufacturing industry (which 2005’s PLCAA law intended to prevent).
Scenario B: SCOTUS hears case and rules in families’ favor. Same effect as above, but with a Supreme Court case as precedent, and pending any tweaks by the High Court.
Scenario C: SCOTUS hears case and rules in Remington’s favor. This will be the death knell for most legal tests to “hold gun manufacturers accountable” and an affirmation of 2005’s PLCAA law.
Scenario D: SCOTUS remands the decision to a lower court with instructions. The outcome would depend on the wording of the order, but this move could lead to a middle-of-the-road solution, perhaps winnowing the case to advertising criteria and nothing more.
All eyes are on Friday to prevent what a friend-of-the-court brief by the NRA and the Connecticut Citizens Defense League called “a de facto ban on firearms” in America.
This article also appears in International Sportsman.
Interested in more national news? We've got you covered! See More National News
Previous Article SADOW: The Worse The Schools, The Less Likely The Folks Are To Support Change
Next Article UPDATED: Meet Murray Starkel, To Whom Millions Of Your Dollars Might Go Thanks To JBE