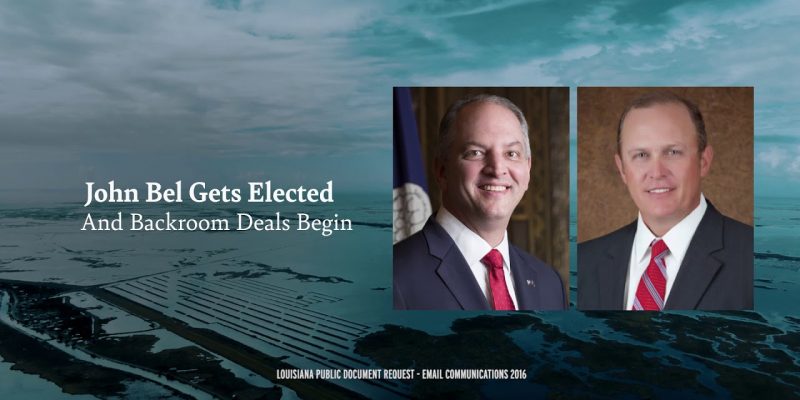 UPDATE: The Advocate, naturally, takes the Edwards camp’s position and screams that the Truth in Politics ad had been “pulled.”

An attack ad in the governor’s race was pulled from airwaves Friday after claiming Gov. John Bel Edwards’ military buddy landed a contract worth up to $65 million, even though the contract was never awarded to any company.

Truth in Politics, a 501(c)(4) co-founded by GOP donor Lane Grigsby, launched the attack ad, which claims that after Edwards was elected, “backroom deals begin” and that his roommate at West Point, Murray Starkel, “lands a state contract worth up to $65 million.”

Edwards’ campaign sent a letter to TV stations in New Orleans, where the ad is running, asking for it to be taken down. The campaign said WDSU pulled the ad. The station did not immediately return messages seeking comment. Cox Media replaced the ad with a new one Truth in Politics sent, according to emails.

So WDSU, one channel in New Orleans, took the ad down and Truth in Politics changed a few words in the ad to run it everywhere else.

Jay Connaughton, the political consultant in charge of Truth in Politics, put out a statement hotly contesting that characterization.

“The CPRA chose Starkel’s company as one of a handful of select companies allowed to bid on coastal projects worth up to $65 million dollars. Apparently, Starkel has no employees and doesn’t even have a legitimate office.

Starkel and John Bel know there will be hundreds of millions spent on numerous projects all over the state. CPRA’s statement neglects the fact Starkel is poised to gorge at the trough. Just highlighting one project that didn’t move forward is misleading and covers up the real stink here. Because of the ‘Outcome Based Contract’ that Starkel was selected for, he is now in a prime position to become a very rich man.

Whether you call it a contract, an award or just a shady deal, it shows Louisianans that corruption is alive and well in our state.”

It’s interesting that Sam Karlin, the Advocate reporter responsible for the piece linked above, was willing to report that Edwards had called New Orleans city councilman Jay Banks, who runs BOLD, the black Democrat PAC which did radio spots equating Eddie Rispone with David Duke, and got him to take those spots down. For Edwards to make a private call to get that done is a bright-line violation of campaign laws prohibiting coordination between candidates and third-party groups making independent campaign expenditures.

But after he was confronted about that by the Louisiana GOP, Karlin resisted and hemmed and hawed, and has yet to report the illegality.

But he meantime reported that the Truth in Politics ad was taken down as false when one TV station refused it.

If that isn’t obvious bias on the Advocate’s part we’re not sure what would be.

ORIGINAL: Truth in Politics just unloaded an ad in the Louisiana governor’s race which could have an impact, as it makes some pretty bold allegations about John Bel Edwards and Murray Starkel, an old Army buddy of the governor who is in line to land a big, fat coastal restoration contract – or maybe several – based on what seems to be not much more than his insider connections…

So we looked this guy up on LinkedIn, and here’s what we found…

Co-Founder of Ecological Service Partners, a firm that capitalizes on opportunities in environmental services and water related investments. The founders recognized the opportunity to combine environmental domain expertise with intelligent and patient capital to benefit from regulatory-driven compensatory spend.

Mr. Starkel has over 25 years of experience in full-cycle large-scale program development including raising capital, working with federal, state and local regulatory agencies, and executing complex construction projects. Mr. Starkel previously spent 21 years as an officer in the U.S. Army Corps of Engineers (“USACE”). While in USACE, Mr. Starkel was Deputy Commander of the New Orleans District in the aftermath of hurricane Katrina. In this role, he managed the $15 billion program to design and build the new hurricane protection system in Southeast Louisiana. Following his military career, Mr. Starkel joined NGP as a Managing Director. Most recently, Mr. Starkel was with Ecosystem Investment Partners, a private equity firm with over $500 million under management focused on land based ecosystem offsets such as wetland and stream mitigation banking as well as endangered species and water quality and quantity trading.

Recently, ESP is pleased to announce the successful closing of $250 million equity round to support ESP’s activities in large-scale ecological restoration including damaged wetlands, streams and habitats for endangered species, as well as enhancing water quality for offsets to nutrient impacts. With $250 million of committed equity capital, ESP is now one of the largest and best capitalized operators in the ecological service market, enabling ESP to restore thousands of acres of wetlands and hundreds of miles of impacted streams. ESP will also opportunistically pursue strategic acquisitions in the US.

As an aside, and apropos of not much, Starkel is the father of Nick Starkel, the quarterback for the Arkansas Razorbacks who formerly played at Texas A&M.

If you want to put on your conspiratorial hat, you can look at a timeline and notice that while he had gotten out of the Army Corps of Engineers in 2008, it was in 2016 when he decided to hang up a shingle and set up this Ecological Service Partners shop. March 2016, to be exact. Here’s what the LinkedIn entry for that company says…

Ecological Service Partners is a land based sustainable asset firm that will acquire, restore, rehabilitate, and conserve ecologically degraded land to generate returns to investors by selling the enhanced properties through credits and/or pay-for-success contracts.

Our primary focus will be on wetland, stream, and species mitigation banking, an industry with nearly $5b in transactions annually, but lacking institutional investors building projects to scale.

ESP will also look at related opportunities such as water quality, water quantity, and associated environmental services as part of its investment platform.

Yes, that sounds like gobbledygook. Essentially what this amounts to is consultants trading on political and legal contacts to get contracts to do environmental remediation projects.

ESP’s strategy is to purchase land or interests in land that can generate significant restoration yields following successful entitlement and ecological restoration and/or enhancement combined with long-term conservation of the properties. The successful execution of ESP’s strategy provides a long-lasting positive impact to the environment.

ESP seeks to invest in locations that have strong existing or expected mitigation demand from a diversified customer base (often a mix of industrial, commercial and public infrastructure demand) or a fully committed, concentrated source of demand (e.g. a large mining project under a long-term mitigation supply contract). As a leading provider of investment capital for large-scale mitigation projects, ESP has unique access to mitigation markets that have not traditionally used third-party mitigation solutions including those dominated by large-scale extractive (mining, oil & gas, etc.) and public infrastructure (levees, dams, pipelines, highways, etc.) development.

That’s more gobbledygook, but essentially what these guys are looking for is land they can buy essentially with somebody else’s money and then either flip after doing restoration work on it or obtain government or other contracts to improve.

And that makes for a potential boon where coastal restoration is concerned.

We’ve got the Truth in Politics source document for the ad, and you can see it here. It makes the point that Starkel has a couple of partners in this company but it doesn’t appear to have any employees or physical office space or any actual track record of performance in land remediation, and yet they’ve managed to be put on the list to do coastal restoration work. When we did a Google search on this company all we found was that in 2017 they’d secured some $250 million in equity capital commitments, which entertainingly enough earned them an award by some organization in that industry – you get an award for fleecing people out of money in the world of environmental mitigation, without actually having to do any work in the field.

Truth in Politics says there was a $65 million coastal restoration contract issued to Starkel’s company, something Edwards’ administration rather hotly denies.

No exaggeration: This is the most false ad I've ever seen.

This contract mentioned in this ad WAS NEVER AWARDED

Lane Grigsby and @EddieRispone are so desperate to attack @JohnBelforLA's military service they're just making things up entirelyhttps://t.co/1NZSR2c8rA#lagov

Holl’s link is to a Baton Rouge Business Report article that went up last night, written by Stephanie Riegel – who has become that publication’s go-to writer when it comes to flacking for Edwards. Riegel says ESP’s bid on the $65 million coastal restoration contract in question was denied as too expensive, but that the party denying the bid was the Trustee Implementation Group, an entity in charge of dispensing BP oil spill money.

Truth in Politics responded with a pair of tweets…

Nice try. ESP was named an “outcome-based performance contractor’’ and is one of only a handful that can bid on lucrative coastal work. https://t.co/cB1yUygZ3m

They are 1st in the line @ the $$ buffet. Showing 1 RFP that ESP lost doesn’t disprove that JBE's friend is poised to make up to $65 mil. https://t.co/egSNH1MU3x

This is one of those things you probably can’t resolve in the small space between now and the election, but a few things seem to be true.

First, this company which essentially looks like three guys who had done environmental mitigation-type work in the past and who got together and raised a bunch of capital two years ago without ever bothering to use it to staff a real office, looks like a fly-by-night operation.

Second, it’s pretty clear Starkel, Edwards’ West Point roommate, has been trading on that relationship in dealing with CPRA. The Truth in Politics source document contains an email between Starkel and Johnny Bradberry, the head of CPRA, which they say is an example of a rather chummy relationship. You can infer from the tone of that email that Starkel’s status as an Edwards insider has a part to play in their discussions.

And third, as Truth in Politics says, ESP is one of a very small number of companies on the list to perform this work, and one wonders why, other than his relationship with the governor, that would be given their lack of a track record or even a physical office.

What we don’t know, and where this will get bogged down, is whether any of the BP oil spill dollars or any other coastal restoration money has made its way to this company or is in line to do so. It would seem obvious that if Edwards were to be re-elected, and particularly if those coastal lawsuits his cabal of trial lawyer friends are pushing begin to result in judgments or settlements, these guys would be getting very fat indeed as one of the small number of companies on that list.

Is the ad a good hit? We’ll see. Is it true? It’s useful at minimum in showing the potential for shady deals involving Edwards and his cronies where the coastal restoration process is concerned. And can Edwards complain about this ad given the absolute garbage he’s been spewing about all of the horrible (and provably false) things Rispone would supposedly do as governor?

Nope. Not really. He made that bed a long time ago.