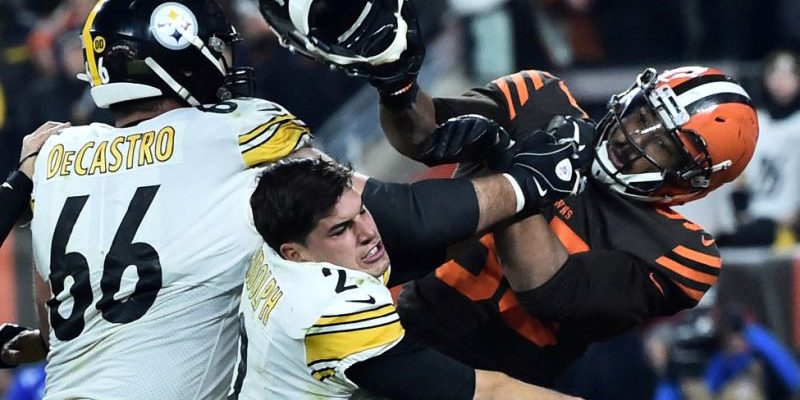 Apologies from players in sports are common, but rarely can we ever really know if someone is truly sorry or not sorry for his questionable actions in the sports arena.

In the NFL’s most recent drama, we can now know that Cleveland Browns defensive end Myles Garrett is not sorry for his despicable show last Thursday.

It is just the latest racial accusation that has long turned into a real-life “Boy Who Cried Wolf” fable.

In the waning moments of the Browns’ 21-7 victory over AFC North rival Pittsburgh, tempers flared and a dangerous brawl ensued, one in which Garrett ripped off Steelers quarterback Mason Rudolph’s helmet and drilled him in the head with it.

Garrett received an indefinite suspension, including a ban without pay for at least the remainder of the 2019 season.

The next day, the Browns and Garrett issued the following apology statement:

“Last night, I made a terrible mistake. I lost my cool and what I did was selfish and unacceptable. I know that we are all responsible for our actions and I can only prove my true character through my actions moving forward. I want to apologize to Mason Rudolph, my teammates, our entire organization, our fans and to the NFL. I know I have to be accountable for what happened, learn from my mistake and I fully intend to do so.”

The statement could have sounded canned and insincere to the cynical reader. And on Thursday, this suspicion proved true.

According to ESPN, in his Wednesday appeal hearing with the NFL, Garrett said Rudolph called him a racial slur before their fight broke out. The NFL has found no such evidence, Rudolph has forcefully denied it, and even Garrett’s teammates say this news came as a shock to them.

People who are truly sorry for their actions do not look for an opportunity to shift blame to the other person just to earn a get out of jail card. And they certainly don’t play the most inflammatory card any citizen of America could possibly play, a card that all-too-often wins the day in today’s PC, race-baiting society.

Even when it is a lie.

It would stand to reason that this type of information–that Rudolph called Garrett this racial slur–might be shared with at least someone in the locker room in the immediate moments after the game.

It would stand to reason that if Rudolph did in fact say this, someone else in the close-quartered brawl would have heard it.

It would also stand to reason that the original Browns/Garrett apology facade might have included that little nugget of information, considering how important it would be in the appeal process to come.

But not a word. Not one. Only when Garrett pressed his appeal and his own well being did he bring it up to the league and try to slander an innocent player in the process.

“This is a lie,” Rudolph’s agent Timothy M Younger said. “This false allegation was never asserted by Garrett in the aftermath of the game, never suggested prior to the hearing, and conspicuously absent in the apology published by the Browns and adopted by Garrett. The malicious use of this wild and unfounded allegation is an assault on Mason’s integrity which is far worse than the physical assault witnessed on Thursday. This is reckless and shameful.”

Said Steeler teammate Alejandro Villanueva, “I think using any kind of racial slurs has no place in our country whatsoever, but I think fabricating a story where somebody used a racial slur is a lot more damaging.”

On the other side, some of Garrett’s teammates did defend him.

Later in the afternoon on Thursday, Garrett doubled down on his allegation.

“I know what I heard. Whether my opponent’s comment was born out of frustration or ignorance, I cannot say. But his actions do not excuse my lack of restraint in the moment, and I truly regret the impact this has had on the league, the Browns and our devoted fans.”

How good of Garrett to repeat his apology after conveniently placing one final, race-baiting jab inside the minds of anyone there to listen and believe him.

Despite there being not one shred of evidence or ear-witness corroboration.

Such a claim only indicates a true lack of remorse.

Playing the race card to gain sympathy and fan support is nothing new in sports, or in the world in general, for that matter. But it is important to highlight these accusations for what they are. In today’s social media-crazed world, it does not take long for a thoughtless, unsubstantiated claim to become factual truth in the minds and mouths of foolishly impressionistic people trying their best to appear informed on a world stage.

No, given how race-sensitive the NFL is, and how quick they would be to suspend Rudolph if these claims were indeed true, it is highly unlikely that any of this actually took place. All this allegation seems to show is that Myles Garrett, try as he might have to appear contrite in his original statement, is, in fact, not sorry.

And neither should anyone else be for calling him out for doing it.

Interested in more national news? We've got you covered! See More National News
Previous Article Here’s What You Need To Know About Democrats’ Impeachment Efforts
Next Article AS EXPECTED: No. 1 LSU Destroys Arkansas, 56-20