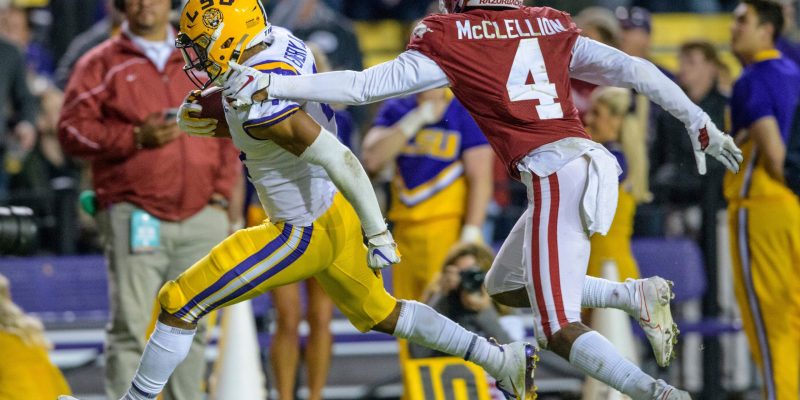 As expected, the No. 1 ranked LSU football team clinched the SEC West title last night for the first time since 2011, crushing the Arkansas Razorbacks, 56-20.

Perhaps the only surprise that came out of the final score is that LSU did not cover Caesar Sportsbook’s 44-point spread, one of the largest in SEC history.

“Overall, we’re 11-0,” said head coach Ed Orgeron. “I’m proud of this football team. But we’re not done yet. There will be no celebrating tonight.”

The Tigers punched their ticket to Atlanta the first weekend of December, where they will face the Georgia Bulldogs in the SEC title game for the fourth time in the last 17 seasons.

The much maligned defense, playing without starting safety Grant Delpit, did its part as well, holding the Razorbacks to 304 total yards despite being on the field for 40:19, much of those yards coming in the final minutes after the score burgeoned to 56-6. The defense swarmed the Razorback offense all night, registering 11 tackles for loss, including four by safety JaCoby Stevens. Stevens also sacked Arkansas quarterback KJ Jefferson three times.

“They ran the same plays that Ole Miss ran, but obviously I thought we stopped them [better],” said Orgeron. “It wasn’t the same type of quarterback, obviously. I thought we made some corrections. We did a great job. I’m proud of our defensive staff.”

LSU quarterback Joe Burrow did nothing to lose his stranglehold on the Heisman, completing 23 of 38 passes for 327 yards and three touchdowns–in just 2 1/2 quarters of play. He became only the fourth quarterback in SEC history to surpass 4,000 yards in a season, and his 41 touchdowns puts him at third in the league all time.

“Business as usual,” Burrow said after the game. “It was never our goal this year, to (just) win the West. We have bigger goals ahead of us.”

J’Marr Chase continued his pursuit of his own hardware, the Biletnikoff Trophy, with a six-catch, 144-yard, one-touchdown night. Running back Clyde Edwards-Helaire, a Doak Walker Award semifinalist and Hornung Award finalist, caught seven passes for 165 yards and rushed for a career-high 188 yards and three touchdowns on just six carries. One touchdown was on his final carry of the game, an 89-yard scamper that was the fifth-longest rushing touchdown in school history.

The Tigers’ second Biletnikoff candidate, Justin Jefferson, had only 27 yards receiving, but he did catch his 12th touchdown pass of the year to move him second on the all-time LSU season list behind teammate Chase.

“We have five guys on the field at all times that can beat you,” said Burrow. “It’s really pick your poison with those five guys. Who are you going to cover one-on-one?”

Despite his team putting up such gaudy individual numbers and arguably their most balanced effort on both sides of the ball in league play, Orgeron made it clear that there is still work to be done. He’s already looking forward to next Saturday and the Texas A&M game after a controversial seven-overtime loss last season in which it seemed there were several blown calls that kept extending the game when the Tigers were ahead.

“No question, no question about it. It’s on. I’ll never forget that game.”

As expected, the Tigers will be heavy favorites in Tiger Stadium next week. And it might not take seven overtimes this time to hang 72 on the board.

Interested in more news from Louisiana? We've got you covered! See More Louisiana News
Previous Article GURVICH AND APPEL: How Can Conservatives Consolidate Their Gains From This Year’s Elections?
Next Article ONE MORE PLAY: LSU’s Edwards-Helaire Is As Large as Life