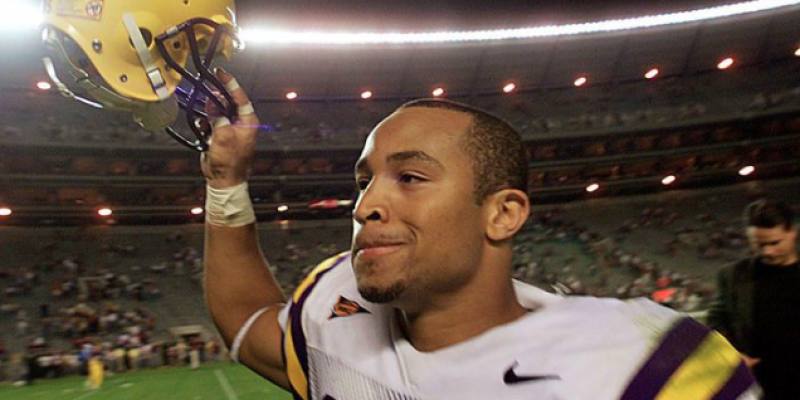 While LSU quarterback Joe Burrow has been storming his way toward the Heisman, he’s had to have someone catch all those passes he’s completing.

Among the many who have helped Burrow achieve All-American status, wide receivers Ja’Marr Chase and Justin Jefferson have stood out. For their stellar play so far this season, the two were name to the twelve-man semifinalist list for the prestigious Biletnikoff Award, which goes to the nation’s top receiver.

Tiger fans may remember eighteen years ago when another LSU great took home the Biletnikoff. It was during a season in which the Tigers started 1-3 in conference play but, after then-head coach Nick Saban put the ball in the hands of quarterback Rohan Davey, stormed back to win the West and the SEC championship over prohibitive favorite Tennessee.

Davey’s prime target that year was Josh Reed, a 5’10 former running back who took home the trophy both Chase and Jefferson are hoping to win in 2019. LSU’s return from the abysmal 1-3 SEC start–that had some Tiger fans questioning the choice of Saban as a coach (he had earned zero of his eventual six national titles at this point)–started in Tuscaloosa when the Tigers beat Alabama 35-21. Josh Reed’s output that day?

You could argue that Davey and Reed’s simpatico performance that day helped catapult Saban to where he is now, considered the great. Without that victory, the Tigers don’t win the West, the SEC, or the Sugar Bowl that year. And two years later they were back in the Superdome hoisting their first national championship trophy since 1958.

The 2019 edition of the LSU Tigers has two Josh Reeds, both outstanding receivers deserving of the award. Chase currently leads the the conference in receiving touchdowns with 13 (an LSU record), receiving yards yards with 1,116, and total yards per game with 124.

Chase is also the first player in school history to produce two 200-yards receiving games in the regular season. He torched Vanderbilt for 229 yards and four touchdowns, then just this past Saturday did his best John Rhys Plumlee impression by dominating Ole Miss for 227 yards and three touchdowns.

Interested in more news from Louisiana? We've got you covered! See More Louisiana News
Previous Article GURVICH: Following Saturday’s Elections, Where Do We Go From Here?
Next Article Kanye West Preaches To Inmates In Jail, Gives Sermon At Mega-Church