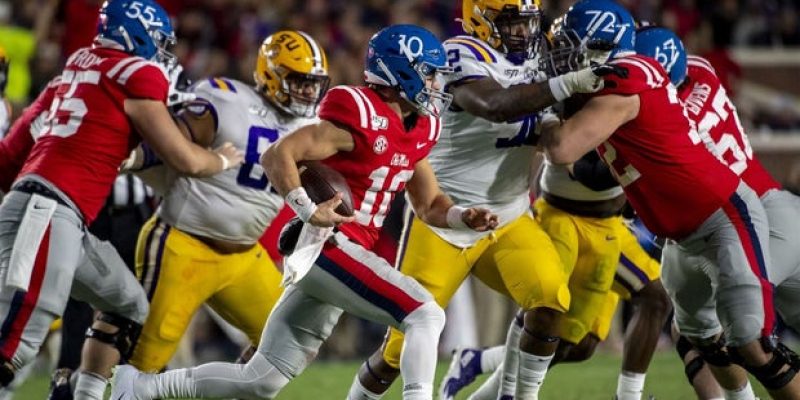 It is simple. The LSU Tiger defense is on trial. It must improve if the program hopes to claim its fourth national championship when January 13 rolls around.

For season after season, it was the LSU Tiger defense that gave the team–the whole program–its identity. Tough, aggressive, often intimidating play kept opponents off the scoreboard just enough for the other side of the ball to score the points needed to win.

Victory wasn’t always the result, of course. It could often be frustrating to see dynamic defensive efforts go to waste when the offense simply couldn’t muster enough points or a timely first down.

…all come to mind.

One anomaly over the last several years was the 2013 squad led by offensive superstars Zach Mettenberger, Jeremy Hill, Odell Beckam, Jr, and Jarvis Landry. The defense often struggled, and that was never more poignantly on display than when No. 6 LSU suffered a 44-41 defeat at No. 9 Georgia.

Especially since once again, the stars have aligned and the championship would basically be a home game for the Tigers in the Superdome.

On Saturday night in Oxford, the porous Tiger defense surrendered 614 yards–614 yards–to an Ole Miss team handcuffed by a one-dimensional offensive system. True freshman quarterback John Rhys Plumlee is good, but he’s not that good. Plumlee torched the Tigers for four touchdowns and 212 yards on the ground, an Ole Miss record for a quarterback . All told, the Tigers gave up 402 rushing yards to a team made up largely of freshman skill players.

The LSU defense played like it was still hung over from the celebratory, fame-inducing victory over Alabama last week.

The night was never more puzzling than the first half of the third quarter. On its first possession of the half, Ole Miss drove 75 yards in just two plays, the second coming on a 46-yard run by Plumlee. When the Rebels got the ball back after a Tiger field goal, it again took only two plays to drive 75 yards, with Plumlee going right through the middle of the Tiger defense for a 60-yard touchdown run.

“As athletes, we’re put on a platform,” Plumlee said. “I really choose to glorify God with that platform. I think the only way to do that is to play as hard as I can. That’s what I try to do and that’s what I think this team tries to do.”

The question is, are all the LSU Tiger defensive “stars” playing as hard as they can?

Plumlee’s rushing  output broke the previous Rebel record of 178 held by Norris Weese in 1972. The 212 yards were the most ever run for by a true freshman in the 125-year history of Ole Miss football.

And it was all done against an LSU defense ranked 2nd in the SEC and 13th nationally against the run.

Of course, as ESPN Sean McDonough so correctly stated, this ranking is likely skewed because teams often have to abandon the run so early in games against the Tigers, whose offensive fireworks can provide them with large early leads.

Anyone watching the LSU defense last night, or the one that gave up 28 points in the second half to Alabama last week, or the one that, so often this year, is inexplicably gashed for obscene chunks of yards, would have to agree. It is inexcusable, or should be in Orgeron’s mind, to know that had the Tiger offense not scored in the second halves of the last two games, 33-13 and 31-7 halftime leads would have been squandered.

This Tiger defense, led by the highest paid assistant coach in the country Dave Aranda, just flat stinks at times.

There can be no objection there.

You shouldn’t want yourself and your inability to stop the opponent with any consistency to be the reason the offense is on the field so much and is forced to break school records just to win a game.

Is it all psychological? Is the defense not playing better because, simply put, given the sheer awesomeness of the Tiger offense, the players know they don’t have to?

What’s the big deal in giving up 40 if you know your boys on the other side of the ball are going to roll up 60?

This could be the case. But there is another concern that should be on the mind of Coach O today and every day this week. Poor play-calling (like in-your-face bump-and-run coverage while up 13 and with only a minute left to play at Alabama last week), poor technique, and poor tackling all exacerbate an obvious question no one wants to ask but everyone in those meeting rooms better be testing this week.

Is it poor effort?

Are some players, who have earned high NFL draft grades and continue to be praised by lazy TV commentators still working off of last year’s stats, tanking it just a bit so as not to get hurt? After all, this is the age of players refusing to play in bowl games in order to avoid getting injured before cashing in on draft day.

LSU All-American safety Grant Delpit is either injured or doesn’t care anymore. Because his technique and tackling has been abysmal all season, even before an ankle injury suffered against Auburn three weeks ago. He didn’t just forget how to play football. He is nowhere near the same player he was as a freshman and sophomore.

Again, if he’s physically hindered, he needs to sit. The kid is showing heart, but Coach Orgeron needs to pull that trigger. It is hurting the team.

And he’s not the only one. The entire defense, especially its linebackers and safeties, must play better if this Tiger team is to get to five more victories and a national championship. To be frank, even an SEC title is in jeopardy if things don’t turn around, and turn around quickly.

LSU’s 10-0 record cannot lull the Tigers to sleep. The coaches must make the tough decisions if those decisions have to be made. Aranda must do a better job of earning that $2.5 million. And the players must look in the mirror all week in practice and in meetings, when it’s not as fun and the lights aren’t on them, and simply decide to be better. To be the players they were recruited to be.

To be the players their boys on the other side of the ball are counting on them to be.

Yes, LSU won the game. Yes, the Tigers are No. 1 in the nation (at least until Tuesday’s night’s new poll is released). Yes, being a Tiger fan today is so much better than it was in the final years of Les Miles’ tenure, or during the Curly Hallman era, or during the Mike Archer era, or during any other season or stretch of years in which a national championship was only a pipe dream.

But that’s just the point. It isn’t a pipe dream this year. It is right there for the Tigers to take.

Said head coach Ed Orgeron, after some largely positive opening remarks that highlighted the bottom line of victory, “I don’t know if I’ve ever been a part of a team that gave up 400 yards rushing, so you don’t want that on your football team.”

He needs to stay right there with his attitude this week. Let the positive front stay in the media room. Because simply put, 15-0 and a national title trophy will never happen with the defense he fielded last night.

The prosecution rests. Time for the defense to step up.