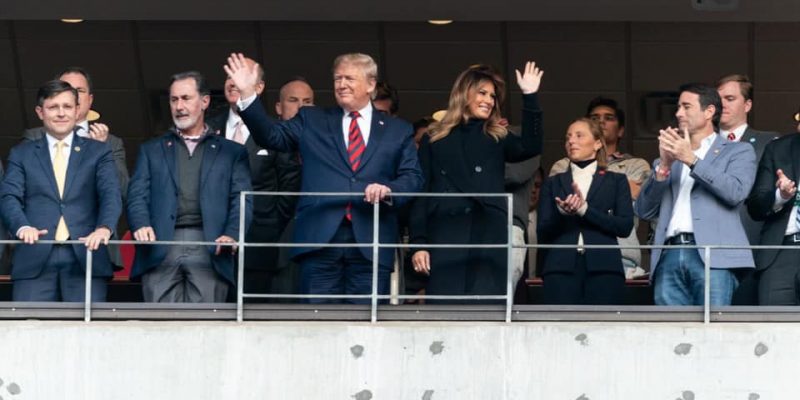 President Trump received a very warm welcome from 100,000 football fans at the LSU-Alabama college football game over the weekend in Tuscaloosa, Alabama.

The reaction was in sharp contrast to the boos received by the President thousands of miles away at the World Series game between the Astros and Nationals in Washington, D.C.

Multiple videos of the ovation have surfaced, showing the response lasted for more than a full minute and confirming that President Trump’s overwhelming support in the deep south has been well-maintained.

Johnson, who called the applause “deafening”, posted a screenshot after the game and joked that it “must have been painful” for MSNBC to use the headline, “WATCH: President Trump is introduced to thunderous cheers at Alabama vs. LSU football game Saturday”.

Outside the stadium, a small group of protesters held signs and floated a “giant baby-Trump” balloon which an Alabama man stabbed and deflated, resulting in his arrest.

The man, Hoyt Hutchinson, has no regrets saying, “I’d do it again if given the opportunity.” Sympathizers have sent Mr. Hutchinson over $30,000 to cover his legal expenses.

President Trump enjoyed the exciting, high-scoring game between the nation’s top two teams which ended 46-41 LSU. The President thanked both teams afterward tweeting, “Thank you to LSU and Alabama for a great game!”

“45” also posted a video of the warm welcome with the caption, “GREAT PEOPLE!”

Check out the hero’s welcome Trump received in the following video:

President Trump is introduced to thunderous cheers at Alabama vs. LSU football game