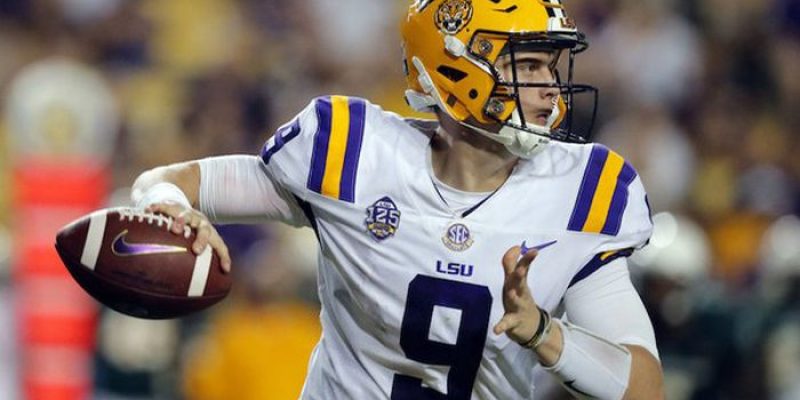 This was and is about a team, especially an offense, that is comprised of just enough doubted and disrespected castoffs, just enough grizzly veterans who have had to work a lot harder than the next guy, to make this season a truly American story.

America loves an underdog. And it loves it because in our blood, somehow perhaps, is the knowledge that our very freedom was won almost 250 years ago against a juggernaut of a world power equal to Alabama, on the much smaller college football landscape of course.

Americans are winners. And we are fighters.

Yes, comparing a football game to the American Revolution or any war is a bit hyperbolic, but it is the spirit of the participants that matters here. It is the fighter within that speaks to us as American sports fans.

Two days before Veterans Day, on Saturday, November 9th, the LSU Tiger football team, led by some of the most unlikely heroes, marched into Bryant-Denny Stadium, and in front of 102,000 mostly hostile fans, systematically dismantled the Alabama defense with surgical precision. The Tigers strategized and executed their way to the most points against a Saban team since 1998. In the previous five meetings with the Tide, LSU’s paltry offense had amassed only 39 total points.

Led by a group of underdog upperclassmen, these Tigers scored 46 in one night, and have transformed into the most fearsome offensive unit in college football.

Everyone knows the story of quarterback Joe Burrow, who is now the frontrunner for the Heisman trophy after throwing for 393 yards on 31-of-39 passing and rushing for an additional 64 tough yards. He was a backup at Ohio State and lost the starting job to Dwayne Haskins in 2018 after a heated competition in the spring.

“Only one guy plays at quarterback, and you also want to be a good teammate with everyone,” Haskins said last fall in the midst of his own Heisman campaign. “You also have to compete at the same time. Just having Joe leave, he’s a really good friend of mine, love him very much and I’m excited for him at LSU. It was a really hard decision for him, but I’m really happy for him.”

So Burrow, cast off by one collegiate powerhouse, and apparently not wanted by another Big 10 school, defected down south and earned the starting spot for another.

Then there’s Clyde Edwards-Helaire, the 5’8 Dalton Hilliard-like tailback who amassed 180 total yards, including a key third down conversion in the fourth quarter when he plowed his way through a Tide defender on the sidelines for the pivotal yardage. Back in 2017, he was only a composite three-star recruit who had offers from no other SEC school. Only Ball State, Cincinnati, Oklahoma, Iowa State, Southern Miss, and UTSA, and of course LSU, offered the diminutive back out of Baton Rouge.

“You know, Clyde is 6-4, 270,” a teary-eyed Coach Orgeron said after witnessing the athleticism, grit, and heart of his junior tailback against the Tide, who became the first player to ever score four touchdowns against Alabama under Nick Saban.

Then there’s star receiver Justin Jefferson, perhaps more known when he walked onto campus for being the younger brother of former LSU quarterback Jordan Jefferson. He was only a three-star recruit as well, ranked 2164th overall and 308th at the receiver position nationally, and 76th overall in the state of Louisiana.

That’s right. A legitimate candidate for the Biletnikoff Award honoring the nation’s top receiver wasn’t even in the top 75 players in his state coming out of high school.

Perhaps most visible is the general of the team, head coach Ed Orgeron. Orgeron was fired as an assistant at Miami, went 10-25 in three years at Ole Miss, was passed over by USC after going 6-2 in an interim role in 2013, and who was, to be kind, not near the top of the job search list when LSU fired Les Miles during the 2016 season. He wasn’t even near the top after he led the Tigers to a 6-2 finish in the interim role to finish out that season.

His professional and personal past just wasn’t as squeaky clean as most would have liked.

Said Verge Ausberry, a longtime LSU administrator, “O and I sat down in his office while he was interim coach in 2016. I asked him why he wanted this job.”

“You know, Verge. I’ve got to redeem myself for Ole Miss. I messed some things up.”

“Nobody believed in us,” said Kelly Orgeron, Ed’s wife. “They thought we were going to be fired after the third game of last season. We knew that. We heard it.”

Redemption may have come Saturday night, when Orgeron’s offense topped that of Alabama, run by offensive coordinator Steve Sarkisian, the very man pegged as the new head coach at USC when Orgeron was passed over.

No, this wasn’t Orgeron vs Sarkisian on Saturday evening. But the coincidence did provide a tangible symbol of the redemption Orgeron needed and got, for USC, for Ole Miss, for everything.

Sometimes sports provide that type of story. Sometimes it just fits. Sometimes the circle that comes back around is so surreal that you can’t believe those parts were actually in place, that they could actually collide at one single moment in time as they so often do.

It is a story that is making LSU an America’s Team of sorts this college football season. Taking down the Tide of course resonates with thousands of college football fans, but perhaps even more so, the Tigers have earned their respect with a blue-collar, workmanship approach to the game and to life. Their best players are winners, and they are fighters.

It is a combination Americans love to root for.