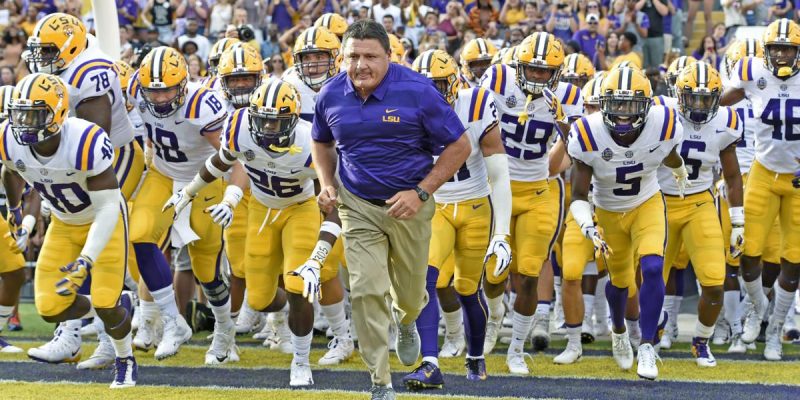 The first College Football Playoff polls were released this past Tuesday, for some fans, taking a little luster off of Saturday’s game slate when the nation’s top two teams LSU and Alabama collide in Tuscaloosa.

Indeed, it can make any fan wonder how disappointing it was for CBS to change its promotion for the game, previously fashioned with drama and suspense with the AP and Amway Coaches polls’ top two teams, to No. 2 LSU vs No. 3 Alabama.

Actually, this is just an assumption I am making. I didn’t see any promos after last Sunday, when the AP poll was used to create it. No. 1 LSU. No. 2 Alabama.

So for this article’s sake, and for the sake of all LSU and Alabama fans, indeed likely of all college football fans universally, let’s do what the playoff committee should have done.

A new Game of the Century.

So rarely do you get this kind of drama, why not?

The last time the nation’s top two teams collided in the regular season was eight years ago, on a chilly November night in Tuscaloosa, when top-ranked LSU out-slugged the Tide 9-6 in overtime.

As any LSU fan knows, it is the last time the Tigers beat the Tide.

A look at the eight games since then shows that the series is much closer than that. 2013, 2015, and 2019 were all relatively  easy wins for the Tide, despite the 2013 game in Tuscaloosa turning on a dime from a 17-17 tie early in the third to a 38-17 route by game’s end. But the 2012 and 2014 games in Baton Rouge could have easily gone the Tigers’ way if a John Chavis prevent defense (2012) and ticky-tack personal foul call (2014), both in the last two minutes of the fourth quarter, hadn’t derailed things. Both ruined dominant second halves by the Tigers and two all-time electric night atmospheres in Tiger Stadium.

The 10-0 game in Baton Rouge in 2016 was another pressure-packed matchup that, with a bounce or call or two, could have gone the Tigers’ way.

The most enduring image of the LSU-Alabama rivalry in the last three seasons under Ed Orgeron, at least in terms of giving Tiger fans hope, is his post-game press conference two years ago, after a 24-10 LSU loss in which the game was much closer and more hotly contested than the final score would indicate. When asked by a media member if this game had laid the groundwork for years to come, Orgeron, with a vehement nodding of the head and knowing grin, interrupted the question and said the now infamous words that have made it into the memes and conversation and hopes of every Tiger fan across the country.

You got the feeling that he was telling the truth. That he and his team really were comin’.

In mere hours the Tigers will be comin’ out of that tunnel.

Staring down the hated opponent in crimson.

It’s a 1 on 1 battle for supremacy in the SEC West.

And the Tigers will be looking for blood.

Interested in more news from Louisiana? We've got you covered! See More Louisiana News
Previous Article Boy, That Truth In Politics Ad About The Coastal Inside Dealing Sure Hit A Nerve…
Next Article BABY ELEPHANTS: Trump Protest on Bama Campus Has Laughable Participation