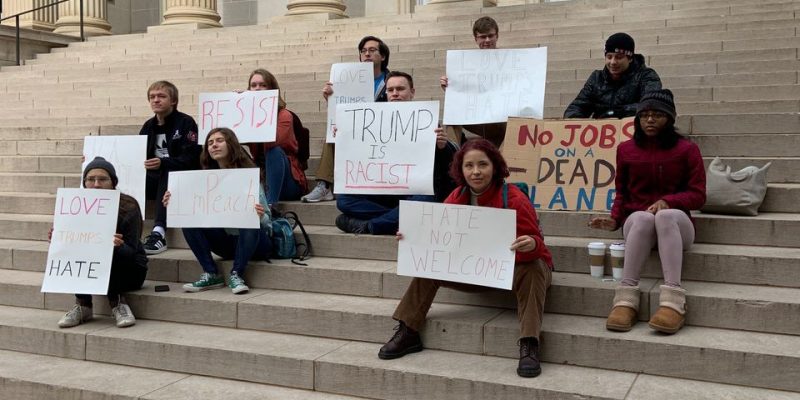 It’s yet another Trump protest. Yawn.

At least most LSU fans and most Alabama fans can agree on one thing. That the looming presence of the President of the United States takes a back seat to the actual football game on the field.

I could say that Tiger and Tide fans would agree based on mere conjecture. Or I could point to some measure of proof from this article on AL.com.

I kind of feel sorry for the one without a cute sign to hold. She looks disconnected from the herd. But at least she has her lattes.

Earlier this week, some Alabama students with time on their hands exercised their First Amendment rights by raising several thousand dollars more than the $4000 needed to rent a blowup caricature of a scowling, orange-faced president in a safety-pinned diaper and bring it to Tuscaloosa for Saturday.

One person called the President a “fool” and his plan to attend the game an “abomination.”

Another person expressed the opposite view, that it was a “shame” that they chose to “embarrass the University of Alabama and the president of America instead of focusing on a great game.”

LSU quarterback Joe Burrow was interviewed by Marty Smith of ESPN this week. Smith asked him his thoughts on the president’s visit. Burrow’s response was something every single person in America could stand to hear.

Indeed, this young captain of the LSU football team has more figured out about being tolerant, humane, and respectful than any of these faux social justice Dumbos could dream of.

In one of the more telling signs of the day, one protester held the words “I HATE TRUMP MORE THAN AUBURN.” Once again, the “tolerant” Left illustrates how loving and welcoming it can be for another human being.

I must say, I don’t hate young people like you, as you would likely hate me for writing this post. I feel sorry for you. I feel sorry that you can’t just love life a little bit more than to try to create a self-aggrandizing, narcissistic blemish on an epic sporting event that will garner a Dumbo ears-load full of positive media attraction for your school.

Just wave your little crimson pom-poms in the stands and be happy for four hours. The focus of the nation is on the game, not on your laughable protest that proves only that you didn’t even have enough participants to field an entire football team.

SADOW: In Shreveport, An Experiment In Universal Basic Income

VIDEO: You Get What You Vote For, Says Jeff Landry

"People are being shot! Businesses are being looted. Innocent Americans are being attacked and threatened. Lives are being ruined. Communities are burning! And democrats refuse to condemn mob violence." - Sen. Mike Lee, after a resolution he authored denouncing riots was killed by Democrats in the Senate.
More Quotes