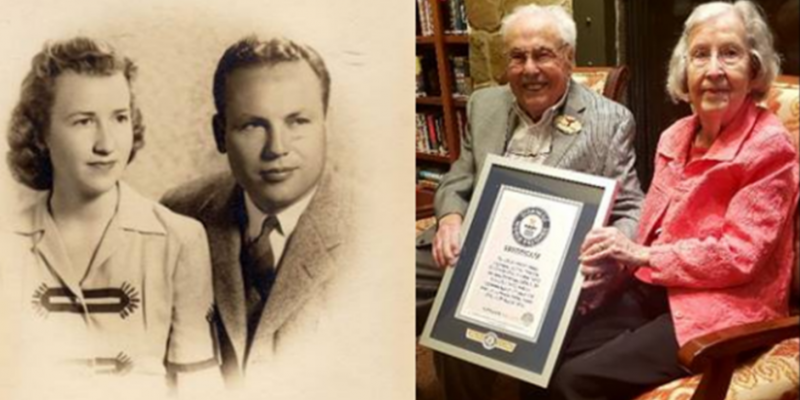 Their combined age is 211 years.

This December– Dec. 15, will be their 80th wedding anniversary. They married in 1939, five years after they met at the University of Texas (UT) in Austin. Charlotte was studying to become a teacher and he was playing football for the Texas Longhorns.

John is the oldest living former UT football player in the U.S. He and his wife have attended games at least once every season for 84 years.

One of the secrets to their long, happy life, John says is being kind.

“Live life in moderation and be cordial to your spouse,” he told the local news.

Both are still very healthy, and John exercises every day. Ten years ago, they moved into the Longhorn Village, a senior living community for former UT staff and alumni.

Married during the Great Depression, they rented a hotel room for their honeymoon– which only cost $7 at the time.

The Hendersons are not the only long-living-married couple in Texas.

Last month, a couple in Paris, Texas, who were recognized by Gov. Greg Abbott in 2018 as the state’s “Longest Married Couple,” celebrated their 82nd wedding anniversary.

Johnnie Leroy Chaffin, 100-years-old, and his wife, Fannie, 97, said the secret to their long and happy marriage was simply love.

“Love is all I know. Love is one of the greatest things in the world if it’s done right. And that’s the way it is,” Johnnie said.