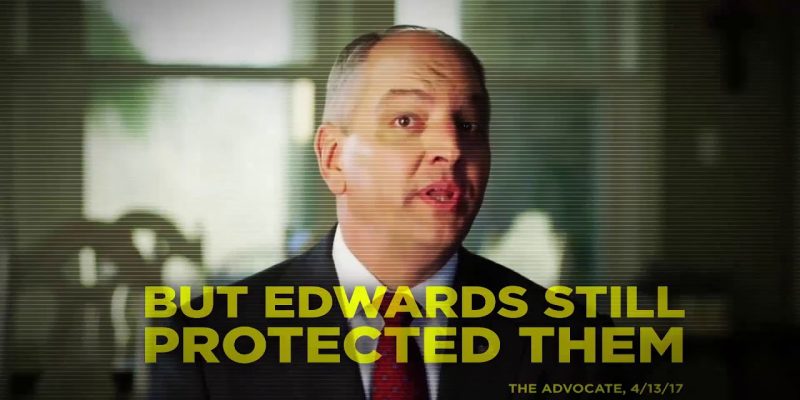 This one is pretty good, and it echoes a lot of the stuff we’ve talked about since the August 2016 flood put so many Louisianans out of their homes in the Baton Rouge and Lafayette areas. It’s impossible to see John Bel Edwards’ performance with respect to flood recovery as anything but a disaster.

And what’s good about this ad is its treatment of IEM, the company which got the program management contract for the Restore Louisiana effort, as a campaign contributor. More on that after the video of the ad.

Let’s remember that when IEM first bid on the program management contract, they won it – but Larry Bankston, the former state senator who spent 41 months in a federal penitentiary on bribery charges but was nevertheless installed as the executive counsel for the State Licensing Board of Contractors, blew up that bid by claiming IEM didn’t have a contractor’s license with the state of Louisiana. This despite the fact IEM’s consortium contained several licensed contractors and those would be the companies actually doing the reconstruction work for the flood recovery contract.

Another company which had issued a bid had an executive working for them who happened to be Bankston’s son, but everyone was assured that had nothing to do with Bankston’s decision to blow up IEM’s bid.

But something happened in the three months between Bankston blowing up IEM’s first bid and IEM winning the contract on a re-bid. Namely, the IEM folks magically all became donors of John Bel Edwards’ re-election.

In other words, that’s how the game gets played in Louisiana. You gotta ante up first if you want to feed at the trough.

It’s good that the RGA at least makes note of the sleazy and ineffective way this governor does business, which is of a piece with Truth in Politics’ ad – which is still running, by the way, as John Scurich recognized this morning, despite Edwards’ camp’s protestations and proclamations otherwise – talking about the chummy manner in which Edwards’ West Point roommate is miraculously in line to get tens or hundreds of millions of dollars in coastal restoration contracts.

Yesterday, in a piece which sparked a good bit of discussion, the Baton Rouge Business Report lamented the fact the Texas convenience store chain Buc-ee’s is completely bypassing Louisiana and intimates that it’s the scummy, dishonest way business is done among the state’s political class which is behind the fact Louisiana is about to be the only place in the Southeast where none of its stores can be found.

It’s hard to argue with that contention. The evidence for it is all around us. On Saturday, Louisiana’s voters have an opportunity to fire the latest practitioner of the Louisiana Way and give somebody else a chance.