Contrary to the mainstream media narrative you’ll hear, which is to blame Eddie Rispone for his statement Friday that he doubts the folks at West Point would be all that proud of what John Bel Edwards has become, this gubernatorial campaign has descended to the bottom mostly due to the incumbent’s tactics.

Was it a mistake for Rispone to hit Edwards on the subject of West Point when he did, during an appearance on an Alexandria talk radio station? That’s arguable. On the substance, Rispone’s statement was defensible. What he actually said, with the screeching of the Edwards camp and the Baton Rouge Advocate’s editorial writers (but we repeat ourselves) stripped away, was this…

“I think he’s hurt West Point’s reputation. I don’t think West Point wants to turn out a bunch of trial lawyers who will say or do anything to save power.”

Is it the right fight for Rispone to engage in? Put it this way – there are other fights Rispone might be better poised to win. The problem with the West Point thing is the way Edwards will deliberately distort Rispone’s statement to make it an attack on all those who served in the military, which is idiotic but exactly how he operates.

And in that he will have the backing of the Advocate, which published not one, not two, but three different articles Friday aimed at deceiving the public and stoking outrage about Rispone’s statements.

Then Edwards put this bit of dishonest messaging out… 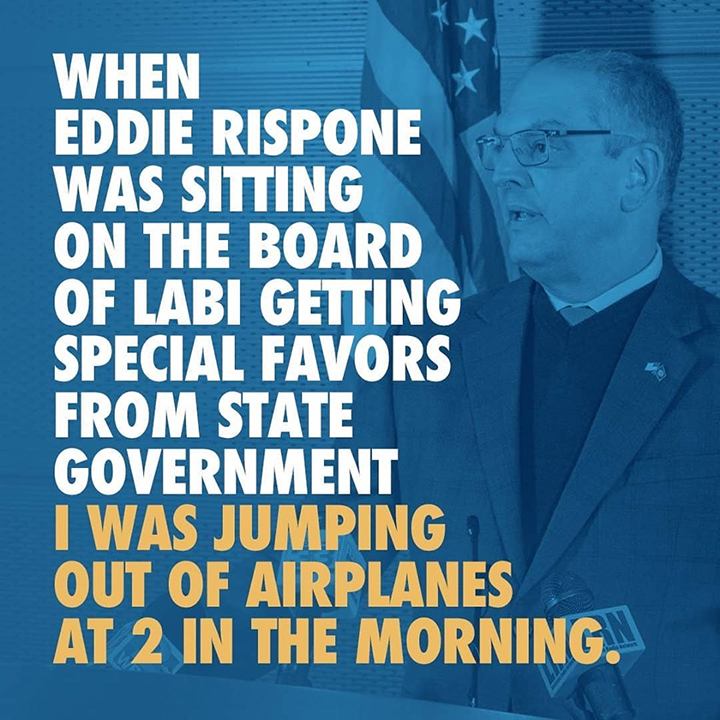 We could pick this apart and quibble with the timeline of Rispone’s membership on LABI’s board vis-a-vis when John Bel Edwards attended jump school while in the U.S. Army, but what’s most dishonest about this is the idea that somehow membership in LABI means one gets “special favors” from state government. LABI isn’t an arm of state government and its board is not some quasi-public entity. It is a purely private-sector operation which has nothing to do with state government.

Eddie Rispone’s company is an industrial construction outfit which does highly specialized, specific work. They design and install instrumentation and controls for industrial facilities like oil refineries, chemical plants, LNG terminals, power plants and the like. None of that work involves state government. To get to that accusation, Edwards’ camp concocted probably the single most egregious lie of the whole campaign, that Rispone received some $500 million in tax breaks from the state. We covered this subject already, but to recap – no, Eddie Rispone has never received tax breaks. And Edwards’ fall-back statement, that he benefited from tax breaks, is just as deceptive. Rispone benefited from tax breaks in the same manner than everyone involved in the local economies of the places where those tax breaks were offered benefited from them – they sparked economic activity which allowed people to earn money and make profits.

This involves Louisiana’s Industrial Tax Exemption Program, or ITEP. What ITEP does is to offer tax breaks on future property tax assessments for a period of time. For example, let’s say ExxonMobil has a facility – let’s call it an oil refinery – which is worth a billion dollars, and let’s say ExxonMobil is willing to spend another billion dollars doubling the size of the refinery. The state and, let’s say, East Baton Rouge Parish, would really like it if ExxonMobil were to spend that billion dollars in Baton Rouge rather than in one of the dozens of other locales where ExxonMobil has facilities, so ITEP is brought in as an incentive. Specifically, through ITEP ExxonMobil will receive an exemption on the increase in value the local government will assess its facility to possess as a result of the money they’ve spent, for a 10-year period. Meaning that no tax revenues are lost – there might be a 10-year delay in the increase of revenues, in exchange for incentivizing economic activity which percolates throughout the local market.

Where Rispone would come into this discussion is long after ITEP incentives would have helped to create a construction project. He would have bid on the part of the construction job involving what his company ISC does, and then performed the work and been paid by, in our case, ExxonMobil using ExxonMobil’s money. Over the next 10 years ExxonMobil would then reap the benefits of property tax exemptions through ITEP and in so doing continuing to pay property tax at the value assessed prior to the new construction, which has nothing whatever to do with Rispone.

This is only slightly different than claiming that you, as a Saints fan living in the New Orleans area, have benefited from $200 million in tax breaks given to the New Orleans Saints which incentivized them to stay in the Big Easy. You would call that nonsense as a matter of political attack and you would be correct, but that is essentially what Edwards is accusing Rispone of.

And while Rispone was receiving these supposed “special favors” from state government, John Bel Edwards was hardly sweating it out in the military. He was riding a back bench in the state legislature, or perhaps what parachuting he did do was in pursuit of his role in the Slip And Fall Wars from his command headquarters at his law office in Amite, the parish seat of his family’s political fiefdom of Tangipahoa.

Nothing about that attack on Rispone is true.

Then there is this, which was seen in the Algiers section of New Orleans… 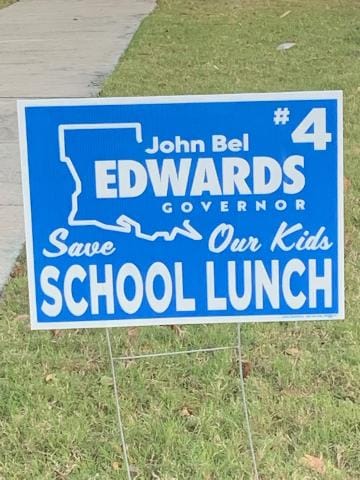 This is even more shameful than the “special favors” lie. What Edwards’ camp is doing here is telling poor people in Orleans Parish that Eddie Rispone is out to take away school lunches.

School lunches are a federal program. A governor isn’t going to take that away.

And yet John Bel Edwards is more than willing to lie to and frighten his own voting base in slandering Rispone on school lunches.

There is more. How about these door hangers? 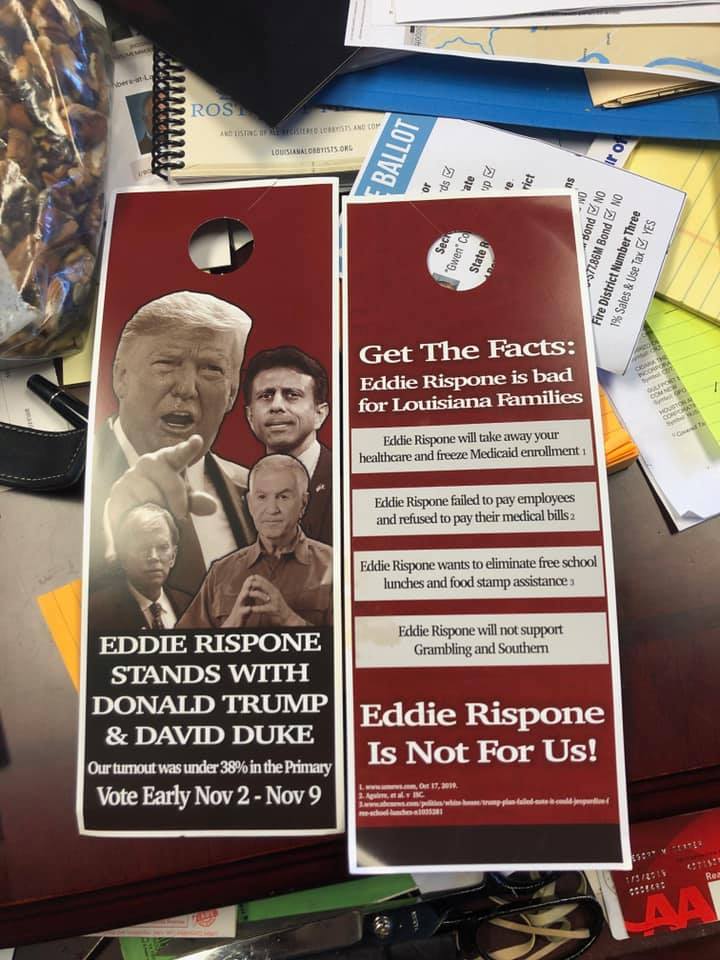 This is also aimed at the black community, and every word of it is completely, shamefully untrue. Edwards knows Eddie Rispone isn’t taking away anyone’s healthcare, and he knows Rispone couldn’t eliminate school lunches and food stamps if he tried. Nor it Edwards’ accusation about Rispone not paying employees is true; he’s talking about a lawsuit years ago involving the group benefits administrator ISC used that was ultimately settled out of court

As to David Duke, that is a smear so low as to disqualify this man from serving a single more day in public life, particularly given his family history replete with slave-trading and segregationism.

Which brings us back to what Rispone said that Edwards and his lickspittles at the Advocate took such offense to – that it does no credit to West Point that one of its graduates will act in such a deceptive and dishonest fashion in the pursuit of political power and privilege.

The West Point Honor Code, which Edwards has hypocritically wrapped himself in since arriving on the scene as a statewide political figure, states that “A cadet will neither lie, cheat, steal, or tolerate those who do.”

Edwards’ campaign and record in office uphold not a single tenet of that Honor Code. Perhaps Rispone could have been a bit more precise in his phrasing, but this governor and his campaign have brought gross dishonor to that which he has hid behind.

We’ve still got two more weeks of the dirge this campaign has been, and it will inevitably get worse. John Bel Edwards has shown that he will do or say absolutely anything in this campaign to stay in power, and he clearly knows he can’t win re-election by selling his record in office.