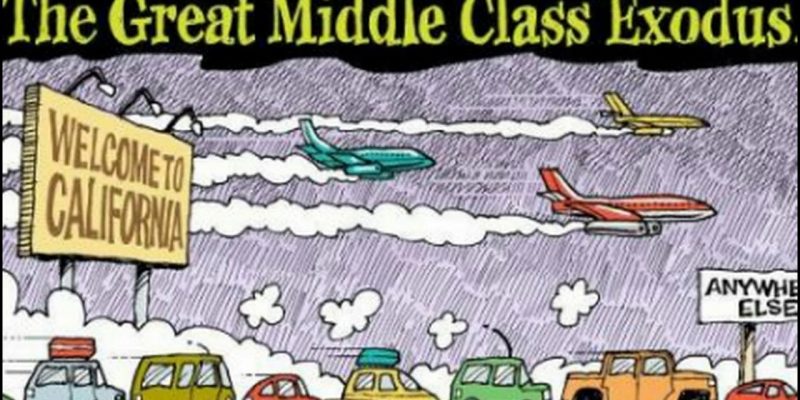 In 2019, California’s population growth slowed to 1900 levels after it experienced a mass exodus of residents.

California’s rate of population increase is close to 1900 levels, according to new data from the California Department of Finance.

The state’s population now hovers slightly below 40 million, the agency says, with little expectation of it increasing in the near future.

Eddie Hunsinger, a demographer with the Department of Finance, told the Los Angeles Times that 2019 was “the first time since the 2010 census that California has had more people leaving the state than moving in from abroad or other states.”

The report was published in the wake of California leading the nation in out-migration and homelessness.

According to a recent U.S. Census report, 27 states and the District of Columbia lost population through net domestic migration between 2018 and 2019. Six reported losses over 25,000, three of which experienced losses greater than 100,000.

Domestic migration to these metro areas has been negative for most of the 21st century, the Census report added.

California has recorded net domestic out-migration since at least 1991, according to state data, meaning it has lost more people to other states than it has brought in from them nearly every year.

In 2018, the Bay Area hit its highest level of outward migration in more than a decade, and still holds the top spot in the country for outmigration.

In 2019, California also led the nation in homelessness, according a recent Department of Housing and Urban Development (HUD) annual report to Congress. According to the report, 29 states and the District of Columbia reported declines in homelessness between 2018 and 2019, with 21 states reporting increases.

Homelessness increased in California by 21,306 people, or 16.4 percent – more than the total increase of every other state combined, the report says. In January 2018, California officials estimated it had a homeless population of 129,972.

“Homelessness in California is at a crisis level and needs to be addressed by local and state leaders with crisis-like urgency,” HUD Secretary Ben Carson said in a statement. “Addressing these challenges will require a broader, community-wide response that engages every level of government to compassionately house our fellow citizens who call the streets their home.”

On Christmas Day, President Donald Trump responded by saying if California couldn’t address its homeless problem, the federal government would.

“Governor Gavin Newsom has done a really bad job on taking care of the homeless population in California,” Trump said. “If he can’t fix the problem, the federal government will get involved.”