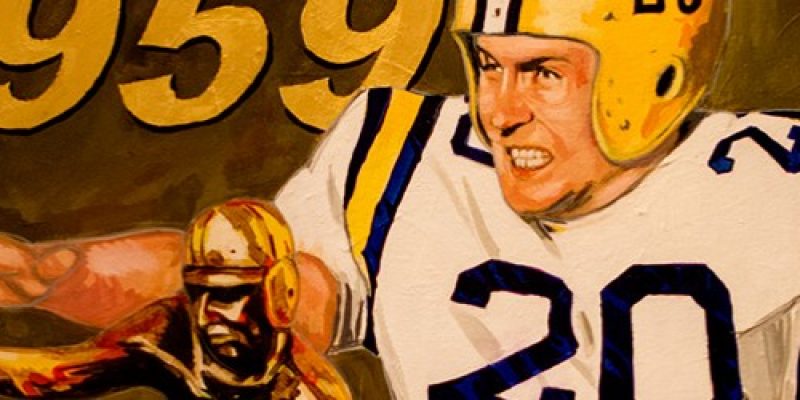 The image is iconic in LSU lore, indeed, in Louisiana lore: the black and white video, on Halloween night, of Tiger All-American Billy Cannon weaving around and through Ole Miss defenders down the sideline for a punt return touchdown late in the fourth quarter, giving the No. 1 Tigers a 7-3 win over the No. 3 Rebels.

Cannon single-handedly won that game for the Tigers.

LSU head coach Paul Dietzel had a rule that punt returners were not to field a punt inside the 15-yard-line. When Cannon picked up the bounce on the 11, Dietzel would later describe his reaction as “Billy, no-no-no,” but soon changed his tune to “Billy, go-go-go.”

But what fans may not know about that haunting night 60 years ago is that, with a 3-0 first quarter lead, Ole Miss coach Johnny Vaught decided to punt on early downs as a gamble to make LSU make mistakes on offense. The strategy paid off, as the Tiger offense fumbled the ball four times in the game. Cannon’s interception of a Jake Gibbs pass early in the fourth quarter made Vaught abandon the offense completely. He went all in on his defense, instructing his offense to punt the ball on first down every series. The Rebel defense held up its coach’s plan, as it held the Tigers scoreless.

Fans also might not know that Ole Miss drove the field after Cannon’s touchdown, and were primed to score the game-winner with just eighteen seconds left. But who came up with the big goal-line tackle on fourth down to preserved victory for LSU?

None other than the biggest noise-maker of the night.

“It hurt,” said Rebel quarterback and punter Jake Gibbs. “You never seen a bunch of guys cry like babies in that locker room.”

If not for Cannon’s special teams and defensive exploits, the Rebels would have escaped Baton Rouge and a raucous crowd with victory–and eventually an undefeated season, as it dominated LSU in the rematch in the Sugar Bowl to end the season 10-1.

Chillingly, the story does not end there, on that Halloween night, however. Truly, it seems sports sometimes offers the most haunting and spirit-led moments in all of life. For on Halloween night in 1979, exactly twenty years after Cannon’s run, his son, Billy Cannon Jr returned a punt for Broadmoor High School–89 yards–for a touchdown. The return came against Istrouma High School–his father’s alma mater.

That 1959 Cannon blast was still rippling through the airwaves twenty years later. Spooky stuff, sports can be.