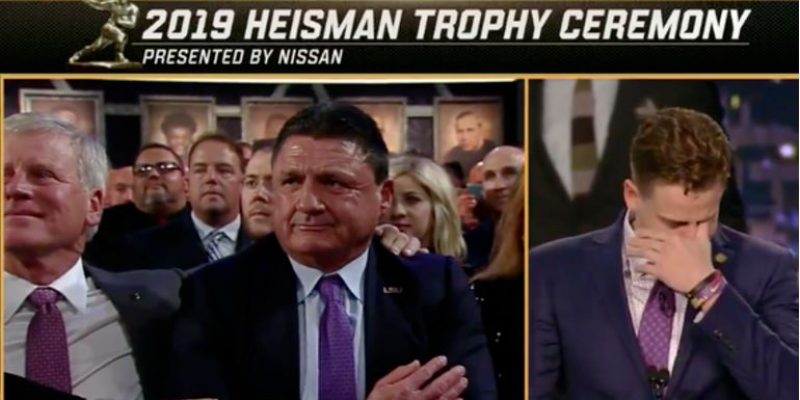 Last Sunday he was Joe Cool. He was a superhero and a star, a mixing of metaphors in order to show what light he has in him.

This Sunday, he isn’t otherworldly or from another galaxy. He’s stripped off yet more pieces of his protective armor. He’s come back down to Earth even more.

And his human side shows us yet again how Burrow’s parents raised him.

Saturday night in New York, in front of family and friends and the nation, Burrow won the 2019 Heisman Trophy, ending the least kept secret of the college football season, as he won it by the greatest margin in the award’s history. He also received a record 90.7% of all the first-place votes available and was named on 95.5% of ballots, another all-time high.

He is the first LSU player to win the Heisman since Billy Cannon did it in 1959.

However, what was a secret, to the nation anyway, was the depth of emotion the young man has. Throughout this week, as he has piled up award after award, Burrow has shown another kind of coolness, the one illustrated best by another Joe–Joe Namath, former quarterback of the New York Jets. It was conceivable that Burrow would simply borrow Namath’s nickname of “Broadway Joe” as he delivered yet another clean, humble, say-all-the-right-things kind of speech in the city where Broadway resides.

But that didn’t happen. Not entirely.

He was humble, yes. He said all the right things, except to leave his running back Clyde Edwards-Helaire out of his long list of thank yous, something he quickly and apologetically corrected later after the ceremony was over. But this omission provides one example of exactly how unclean this speech was.

And how utterly perfect it was because of it.

The young man from small-town Athens, Ohio stumbled and stopped and started again, over and over again and again, in an emotional speech that often left him cornered by tears he seemed both not to want and to be totally comfortable with.

He gave praise and thanksgiving to not only LSU and the state of Louisiana as would be expected, but also to Ohio State, the coaching staff and program that jilted him time and time again before his move to Baton Rouge. And it wasn’t a cursory nod of the head–he went over and hugged coaches, and mentioned Ohio State three times in his speech, including in the final farewell where his skill with words came out yet again as he combined the worlds of the midwest and the deep south with perfect symmetry.

Perhaps the most powerful moment of the night came when he thanked head coach Ed Orgeron, a personal address you could tell was kept for later in the speech, kept especially for a man it’s seeming more and more any parent would want his child to play for.

“You have no idea what you mean to my family. You know, I didn’t play for three years. You took a chance on me, not knowing if I could play or not. And I’m … forever grateful for you. Can you imagine a guy like Coach O giving me the keys to his football program. He just means so much to me and my family.”

He tried to look at Coach O as he said it, but he simply couldn’t hold the attention. You just knew that if he mouthed even three words while looking at his beloved coach, he’d lose total control and be a sopping mess dressed in a suit up there on the stage.

Still, even if he had done that, no one would have blamed him.

Joe Burrow, in this one ten-minute span of his life, became something else entirely. He showed not a dripping, overly sensitive side of himself as some idiot cynics will say. No. That’s not at all what it was. It was the depth of his humanity, the gamut of emotions pent up for years of being skipped over and rejected, kicked aside like a football at the end of a long hot afternoon practice. It was the depth of soul that everyone in this country could stand to learn from a little. It was the mettle of a young man growing into a role that he will likely play for the rest of his life–a Heisman Trophy champion with a light all his own for young people and for football players alike to aspire to.

Thank you, Joe. Thank you, Mr and Mrs Burrow. Thank you for showing the nation what it means to be a dynamite human being.