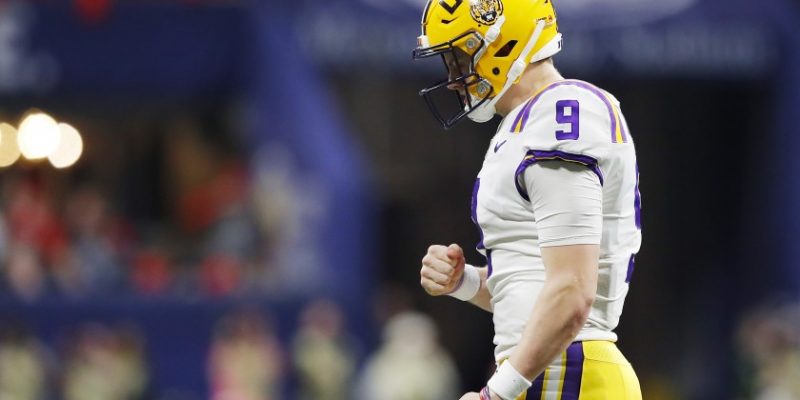 Is there anything Joe Burrow has not done on his waltz to the Heisman trophy this year?

It seems it’s another must-see play every single week.  On LSU’s first possession of the game, the senior quarterback caught a pass that was batted back by a Georgia defensive lineman and ran 16 yards for a first down.

Anyone who watches football knows that this never happens. Quarterbacks catch their own deflected passes all the time, but never for positive yardage.

The superstar wasn’t done with the Houdini act. In the third quarter, with LSU needing one knockout strike to extend an already formidable 20-3 lead, Burrow provided New York with the coveted “Heisman moment,” as if he needed one, when he spun and skirted and slipped his way out of the pocket and threw a 71-yard strike to wide receiver Justin Jefferson. The play, while not quite as magician-like as Eli Manning’s in the 2008 Super Bowl, was nonetheless special.

Burrow stuffed the stat book again Saturday afternoon, throwing for 349 yards on 28-of-38 passing and four touchdowns. His season stats, ridiculous: 4,715 passing yards, 48 touchdowns, only six interceptions, and a 93.7 QBR.

He is a superhero.

He is as big a runaway Heisman winner as I have ever seen.

But Burrow’s talent is not the only thing that makes him great. His character and leadership were also on full display Saturday afternoon.

Early in the second quarter, with LSU up 14-3, Burrow looked to levy an early knockout blow to the Bulldogs when he found wide receiver Terrace Marshall, Jr deep downfield in Georgia territory. The Bulldog defender slipped, and Marshall was left by himself with nothing but green turf ahead of him.

And he dropped a perfectly thrown pass.

Burrow’s hands went immediately to his head as he lamented what could have been–a 21-3 lead.

Marshall, Jr’s reaction was perhaps just as much of a tell to this team’s character and championship aspirations as anything. Instead of laughing it off as so many players will do, the sophomore receiver was visibly upset, going over to Burrow on the sideline to apologize.

Burrow’s response? You could read his lips. He said, in so many words, don’t worry about it. I’m coming back to you.

Indeed, Marshall, Jr, who had registered three catches for 72 yards and a touchdown before the drop, would catch another touchdown pass late in the third that put the game away at 27-3.

Marshall, Jr got the opportunity to make amends for his mistake. Joe Burrow came through on a promise to his teammate.

Burrow wasn’t done. After the game, head coach Ed Orgeron presented Burrow with the game ball. What did the game MVP do with it?

He handed it right back to Orgeron, who smiled at the gesture so widely that his face was lit up like a Christmas tree. It is a must see….

“He deserves it,” Burrow said of the gesture on the CBS broadcast. “He’s done so much for the state, and so much for this university. If you don’t want to fight for that guy, there’s something wrong with you.”

It is clear that Burrow’s teammates fight for him just as much. They love him, and that team chemistry has LSU fans genuinely believing that this is the year. This is the year LSU erases the ghosts of 2011 and a national title that should have been.

Sports can be a world filled with arrogance and other kinds of gestures, those fueled by insecurities hidden behind a psychological facade of weak-minded players. But afternoons like Saturday and players like Burrow are a great reminder that amidst all the hitting and trash-talking and all-out efforts to win a ballgame on the scoreboard, these players, when you strip off the colors and pads, are just people. And oftentimes, they do such special things that it makes the superhero clad in the football armor shine that much more.