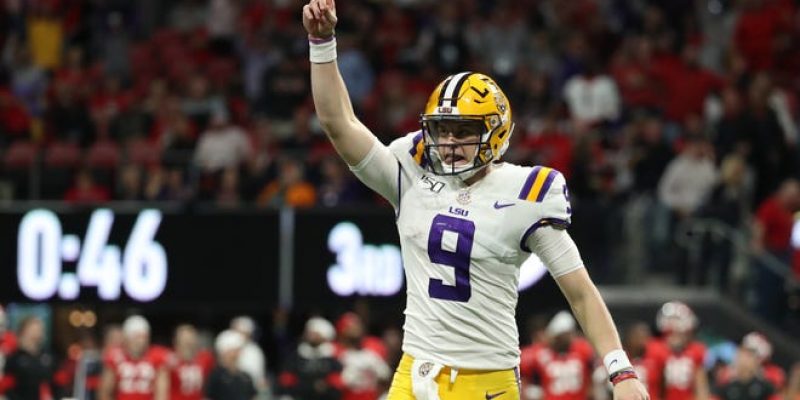 They already look silly, so it’s not a slam dunk that they won’t redirect in time to save any sort of face in this year’s final College Football Playoff seeding.

Fans would be willing to forgive them for their previous decisions, considering the fact that all the preliminary polls don’t matter at all anyway. But screw up this one, the one that will determine the Final Four, and we will likely have another system in place to determine college football’s national champion in the not-too-distant future.

The LSU Tigers, ranked No. 1 in both the AP and Coaches polls but No. 2 in the CFP, took to the field Saturday and erased all doubt that they are, right now, the most deserving of top billing in the poll, dismantling fourth-ranked Georgia in the Bulldogs’ backyard in Atlanta, 37-10.

It was LSU’s fifth victory over a top-10 opponent this season.

“I’ve been in this league a long time, and I don’t know that I’ve seen the combination of things they’ve got,” Georgia coach Kirby Smart said.

Smart, Kirby. Let’s just hope, for the entire sport’s sake, that the playoff committee sees things the same way. Because there is nothing that has or likely will stop this LSU offense.

Georgia entered the game with the No. 2 defense in the entire country. Tiger quarterback Joe Burrow and company moved up and down the field to the tune of 481 yards, averaging 6.5 yards per play. The Bulldogs D had surrendered a season-high 20 points in a single game this season. LSU nearly doubled it, and were it not for a surefire touchdown pass dropped by wide receiver Terrace Marshall, the final outcome would have been even more telling.

“When we’re 13 and 0 and coming out with wins like this, why not feel unstoppable?” said wide receiver Justin Jefferson, who was the recipient of a spectacular pass by Burrow that will undoubtedly provide New York with the perfect “Heisman moment” image next week at the award ceremony. “Our confidence is very high right now and that’s what we need coming into the playoffs.”

The committee’s knock on LSU throughout the process is that Ohio State was the more complete team. This was a clear knock on LSU’s defense, which did have trouble finding its way much of the season. A nationally televised collapse in the second half of the Ole Miss game, one in which the Tiger D lost focus with a 31-7 halftime lead, and coming off the greatest victory for the program in eight years at Alabama, gave the impression that LSU’s defense was soft and lazy. The last three weeks have shown a different story.

First of all, All-American and Thorpe Award finalist Grant Delpit is finally healthy and playing near the line of scrimmage again, where he excels. Most importantly, the defense has done its best to do its 2011 and 2003 impressions, giving up just 2.86 yards per play to the Bulldogs, 2.82 yards per play to Texas A&M a week ago, and 4.28 to Arkansas the week before that. Were it not for two garbage-time touchdowns by Arkansas flanked around a recovered onside kick late in the game, the Tiger D would have held its opponents to 6, 7, and 10 points the last three outings.

With a runaway Heisman quarterback throwing to some of the best receivers in the country, including the Biletnikoff finalist J’Marr Chase, and the coaching acumen of passing game coordinator Joe Brady recognizing any and every wrinkle defenses throw their way, who is going to stop this team?

It would not at all be an embarrassing defeat to go down to the likes of college football juggernauts Oklahoma, Ohio State, or Clemson. The season would still be a success. But it looks as though this year it is the Tigers that are the most formidable of them all, and when the CFP final seeding is released later this morning, they all need to be looking up at LSU.