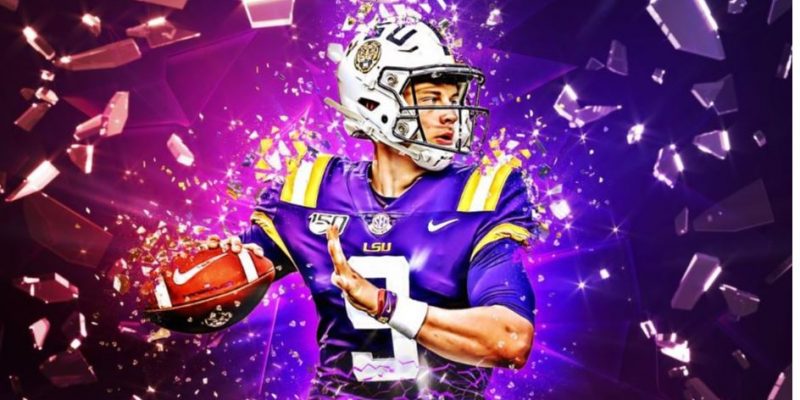 LSU star quarterback Joe Burrow entered the season as a 200-to-1 longshot to win the Heisman.

He was projected to be a mid- to late-round NFL draft pick at best.

Eleven games and one meteoric rise later, he is considered by many to be the No. 1 pick and the next quarterback of the Cincinnati Bengals.

And he is a lock to win the Heisman.

In my memory, there has never been a college football season where there is so little drama surrounding the Heisman Trophy. Sure, Fox commentators will pump Ohio State defensive end Chase Young for the award, but that’s what they’re supposed to do considering they have a contract to show Big 10 games. As ridiculously good as Chase Young is, the truth of the matter is that if he does win, it will be one of the biggest travesties in college football history.

The award belongs to Joe Burrow. And it likely won’t even be close. Even Sports Illustrated is hopping on the bandwagon this week.

Burrow has directed a total overhaul of an LSU offense that was simply bad. And they were bad for years. It had been stuck in the rut of an archaic, ground-and-pound philosophy that couldn’t even be energized by innovative offensive coordinator Matt Canada in 2017. Canada was fired after just one season, and after the Tigers showed some signs of improvement with Burrow under center and Steve Ensminger as offensive coordinator, head coach Ed Orgeron hired New Orleans Saints whiz-kid, 29-year-old Joe Brady, to assist Ensminger as passing game coordinator.

When asked this summer by skeptical reporters exactly how different LSU’s offense would be, Burrow looked like a kid with a secret but no way to hide it.

It wasn’t that Burrow was bad last season, his first as LSU’s starting quarterback after transferring from Ohio State. He led the Tigers to a 10-3 record and a victory over undefeated and seventh-ranked Central Florida. He was a gritty competitor, often running for first downs with his legs rather than throwing for them with his arm. He was a good player, throwing for 2,894 yards and 23 touchdowns.

But he was nowhere near the All-American talent he has put on display this season.

The numbers could run for days. Burrow is averaging 364 passing yards and 3.7 touchdowns per game. His 78.9% completion rate would rank him first all time in big-time NCAA football. At 4,014 passing yards on the season, he is only 261 away from shattering the all-time SEC mark. With 41 touchdowns passes, he needs only four to break the conference record.

And he still has four games to do it.

Tom Vander Ven, a Professor of Sociology whose research delves into criminology, and also Burrow’s fourth-grade basketball coach to boot, recognized early on that Burrow had the internal climate to perform on the big stage.

“Most of us, when it’s a high-intensity situation, an anxiety-producing situation, we run in the other direction,” Vander Ven said. “So that’s why law enforcement, emergency medical services personnel, those who are successful at the job, are unique people, because they run towards danger. Most of us run away from it, or it’s such a stressful situation that we don’t feel comfortable in that situation.

“I think Joe thrives on that.”

Burrow’s signature Heisman moment may have come over the course of an entire game when the Tigers ended an eight-year drought against the Alabama Crimson Tide with a 46-41 victory in Tuscaloosa. Time and time again, when the Tide would have all the momentum and 100,000 screaming fans behind them, when that “high-intensity situation” would see most quarterbacks fold under the pressure, Burrow would calmly lead the Tiger offense back down the field. Clutch throw after clutch throw, crucial third down pick-up after crucial third down pick-up, score after score, Burrow cemented his legacy that afternoon as an LSU legend and propelled him into a one-horse race for the Heisman.

The 46 points Burrow and company hung on the Tide in Bryant-Denny Stadium was just the next example of how LSU is silencing the skeptics. The senior quarterback is breaking bad with LSU’s offense, taking it to the cusp of its first college football playoff appearance, rewriting SEC football record books, and is showing no signs of being derailed. Still, to the competitive but soft-spoken, tiny-town Ohio boy, what matters most is winning.

Burrow is usually a quiet guy, but the story goes that when Texas fans blew a cannon through Burrow’s No. 9 jersey on ESPN College Gameday in early September, the quarterback looked at a teammate and guaranteed a 400-yard passing night. Hours later, the Tigers walked out of Austin and the top-10 showdown with a statement victory, and Burrow had made good on his promise.

“If the ball’s in Joe’s hands at crunch time,” Vander Ven said, “you just know he’s going to get it done.”

Many athletes have had that said about them. But rarely is it as true as it is in this case. Joe Burrow is getting it done, and his fire and won’t-lose attitude may very well bring a fourth national championship to Baton Rouge.

A looming obstacle to that happening?

The second-ranked Ohio State Buckeyes, the program that said Burrow simply wasn’t good enough. And if that matchup occurs on January 13, you can bet with better than 200-to-1 odds that it won’t take a cannon-ball gimmick on national television to motivate him.

Interested in more news from Louisiana? We've got you covered! See More Louisiana News
Previous Article Trump’s turkeys Bread and Butter spend a few days at the Willard Hotel ahead of Thanksgiving [videos]
Next Article SADOW: A Louisiana Reapportionment Drama Looms In 2021