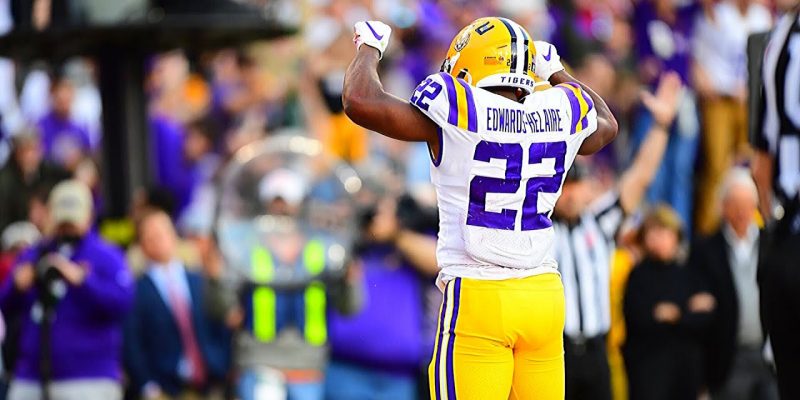 He was at 99 rushing yards for the game. The intent by everyone not named Ed Orgeron was to send him out there for one more play to get just enough yards to top 100 for the night.

One play and 89 yards later, Clyde Edwards-Helaire had run for the fourth longest rushing touchdown in LSU history.

Said Orgeron, “When [the Tiger offense] went in I said, hey guys, don’t y’all think it’s time to get Clyde out? And they said, ‘Just one more play, Coach’.”

“It opened, it parted like the Red Sea,” said Edwards-Helaire of the blocking in front of him on the play. “I was like, I’m about to take this one yard.”

The 5’8 running back, who has received doubt from onlookers throughout his playing career because of his diminutive height, is now a semifinalist for the Doak Walker award–given to the nation’s top running back, and a finalist for the Paul Hornung Award–given to the nation’s most versatile player. He entered the season with many fans thinking he would slide down the depth chart between two true freshmen, the No. 1 and No. 6 ranked running backs coming out of high school. But all he has done is win the starting role and skyrocket up NFL draft boards.

“I wasn’t missing that father figure, because I always had my stepdad,” said Clyde. “He taught me everything, from being respectful to looking a man in his eye when I’m talking to him.”

Still, his biological father is a huge part of the young man’s life. He was the one who told Clyde’s mother to let him play football. He is the one, now out of prison, right by his son’s side as he continues to shine. In his breakout game of the year against Tiger nemesis Alabama on November 9, the one that displayed to the nation exactly what type of integrity and talent he had, the junior rushed 20 times for 103 yards and three touchdowns, while catching nine passes for 77 yards–both career highs–and a touchdown.

“He has a great mindset about himself,” head coach Ed Orgeron said. “He has the heart of a champion. I am so proud of Clyde.”

“You know, always a lot of doubt as far as us as a team, us as a state,” said Clyde after the Alabama game. “Personally myself, always been talked down–height and everything else. So, being able to help my boys out, it’s something unbelievable. This is amazing. I can’t wait to get back home.”

He shared a special moment with his father after the Alabama game, one caught on video that has now gone viral on the internet.

“I talk to my dad every day. I could talk about him all day and tell his story. Being able to see him, to share that moment with him after the game…the things he was saying to me. I’ve taken all kinds of criticism coming up, being a shorter back.”

It can be certain that Edwards-Helaire has effectively silenced the naysayers. Whether it’s running through Alabama defenders Trevon Diggs and Jared Mayden for a crucial fourth quarter first down, or taking it to the house from 89 yards out on his final play of the game against Arkansas, he has proven that a man’s heart and skill can always outweigh any deficiency in size.

“We fished, we did a lot of things like that,” said Shannon Helaire about raising his step-son. “But (Clyde) was always involved in sports, and that’s really when I recognized his craft, because, like in a game of tag, he was never tagged.”

Indeed, it seems Clyde Edwards-Helaire is always sprinting and slithering and spinning through and around every defender he faces. And instead of allowing the critics to continue to tag him with nothing but question marks, the only thing the young running back seems to do is tag both his highlights and his life with exclamation points.