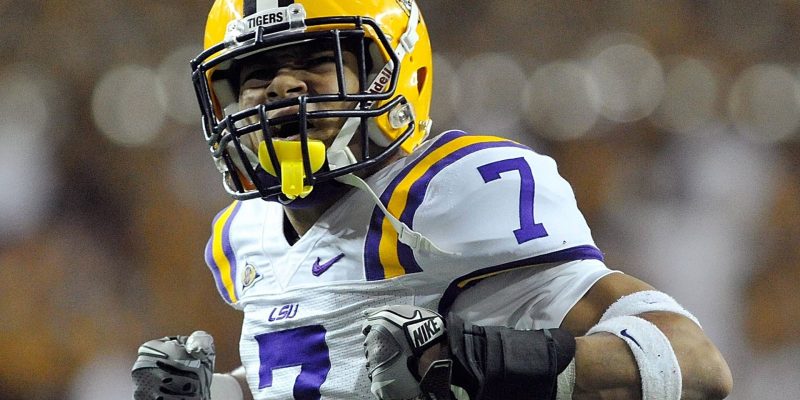 Everyone knows that football, in terms of dependence on the man next to you, is perhaps more of a team sport than any. It isn’t nearly the cliche as it can be in other sports like basketball and baseball, where an individual player can literally carry a team to victory.

But in 2011, a once-in-a generation college player prowled the field for the LSU Tiger team, a 5’9 animal who earned the nickname “Honey Badger” because of his penchant for forcing impossible turnovers, for taking what he wanted when he wanted it, as the popular saying went from a YouTube video that went viral during the fall of 2011.

Tyrann Mathieu, the man behind the Honey Badger moniker, set an SEC record with eleven forced fumbles in his career from 2010-11. In his sophomore season, he was named a consensus All-American, won the Chuck Bednarik Award as the nation’s best defensive player, and was a finalist for the Heisman Trophy, a rarity for non-offensive players.

That talent was perhaps never more on display or more of a necessity than in the 2011 SEC Championship Game against Georgia. Just as he had with his punt return for a touchdown the previous week against No. 3 Arkansas, when the Razorbacks were up 14-0 in the second quarter, Mathieu simply took the moment and the game over. Like an animal who takes what he wants, he simply said no, my team will not lose today.

The No. 1 Tigers could not move the ball on offense. They did not tally a single first down in the entire first half while its stellar defense kept the team in the game. It would muster only a dozen yards total before halftime.

It was 10-0 Georgia with a little over five minutes left in the first half, but with the Tiger offense sputtering and coach Les Miles inexplicably keeping Jarrett Lee on the bench in favor of Jordan Jefferson, a ten-point deficit seemed like so much more.

So while the LSU offense struggled, it was its special teams, specifically Mathieu, who took matters into his own hands. The Bulldogs’ Drew Butler sent a booming 59-yard punt from deep in his own territory, sending Mathieu back to the Tiger 38-yard line to retrieve it.

He ran right first, straight across to the right hash-marks, looking for blocks. He got them.

Then it was a side-step to the left at midfield, leaving a Bulldog tackler in his wake.

And from there it was a symphony of cutting and weaving, zigzagging, between and behind a convoy of white and gold, before he emerged unscathed, free from everyone, and waltzed into the corner of the endzone.

“Obviously, we got off to a slow start,” said Mathieu after the game. “So I just felt that I needed to change the momentum of the game. It was the perfect time with that punt return. Just trying to make one guy miss and just get up the field.”

It was still 10-7, Georgia. But somehow you knew it–this was now LSU’s game. The defense had become the Berlin Wall, and Mathieu had given the team a spark on the scoreboard it needed going into halftime.

Mathieu struck again early in the third, when he recovered a fumble forced by Tiger defensive lineman Michael Brockers at the Georgia 27-yard-line. Two plays later Kenny Hilliard ran for a 15-yard touchdown, giving the Tigers their first lead.

“I’m so blessed, just so privileged to represent LSU and win most valuable player,” said Mathieu. “I think a lot of credit goes to my team and to my coaches to put me in the right position to make a big time play for my team.

Mathieu likely would have won the game MVP award based just on these two plays, but he wasn’t done. His second punt return, with the game still hanging in the balance in the third quarter, was even more spectacular.

He fielded the ball at his 35, immediately shook two tacklers, and skirted inside a block and across the midfield logo into open space. A gauntlet of Bulldogs in front of him, Mathieu stutter-stepped, side-stepped, and picked his way through the maze, taking a full step back in one instance as the would-be tackler whiffed by him. He then bolted through a small gap and looked as though he’d score again, before a Georgia defender barely tripped him up at the Georgia 17.

The Tigers would score just four plays later, and the rout was on.

It was known that before games, just as NBA basketball legend Michael Jordan used to talk about, Mathieu would envision making the big plays. His dream did not, apparently, turn into reality.

“Last night I envisioned me having three touchdowns. I think I came close to that.”

The Arkansas game had Tiger fans nervous early on, and Mathieu turned the tide. Same with the Georgia contest, LSU’s eleventh SEC championship. The final scoreboard said total domination in both games, but in reality the scores were the end result of the stunning, spectacular play of one special football player whose career at LSU ended one season too soon.