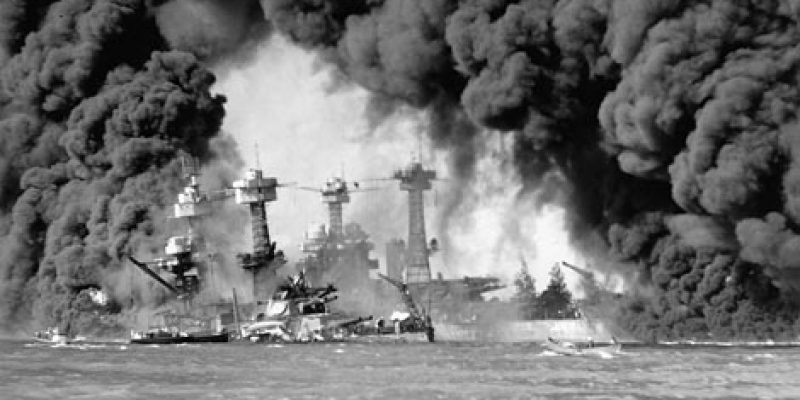 At nearly 8 a.m. on a Sunday morning, the American Navy and everyone at the U.S. Navy base near Honolulu, Hawaii, were awakened by hundreds of Japanese fighter planes descended on them. The Japanese destroyed or damaged nearly 20 American naval vessels, including eight battleships, and more than 300 airplanes. More than 2,400 Americans were killed in the attack, including civilians. Roughly 1,000 were wounded.

The next day, Dec. 8, 1941, President Franklin D. Roosevelt asked Congress to declare war on Japan, which it did.

The National Park Service Pearl Harbor Memorial website has many exhibits explaining aspects of the war and the Japanese attack.

Visitors can go to the U.S.S. Arizona memorial, which was reopened this fall, on Sept. 1, 2019. From the National Park Service:

The Battleship USS Arizona was bombed on December 7, 1941, about 15 minutes into the Japanese attack on Pearl Harbor, killing 1,177 sailors and Marines. Over 900 could not be recovered from the ship and remain onboard. Today, Arizona rests where she fell, submerged in about 40 feet of water just off the coast of Ford Island.

Designed by Honolulu architect Alfred Preis, the memorial was built in 1962 on top of (but not touching) the sunken USS Arizona. The memorial honors the memory of the crew of the USS Arizona, as well as all the other service members and civilians killed in the attack. A total of 2,341 sailors, soldiers, and Marines died as a result of the attack, as well as 49 civilians.

The USS Arizona Memorial program is 75 minutes long. It starts in the theater with a 25-minute documentary and is followed by a boat ride to the memorial, time at the memorial, and a boat ride back. Programs begin every 15 minutes from 7:30 a.m. to 3:00 p.m.