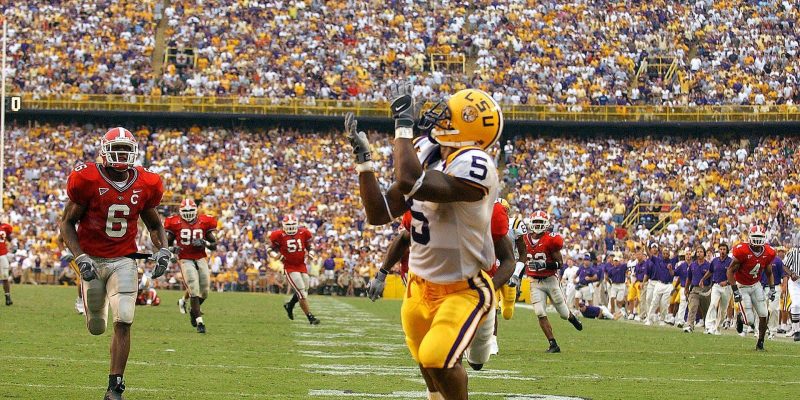 In two days, the high-powered LSU Tigers look to find another victory over Georgia in the SEC Championship game, in what will be the fourth clash in the conference title game between these two great programs since 2003.

Despite being ranked No. 1 in the AP and Coaches polls, in landslides at that, LSU continues to be seeded No. 2 in the College Football Playoff rankings. I would get into my opinion on the college football committee, but I will not be a hypocrite and contradict my recent article on Dabo Swinney.  I am appreciative that, as a Tiger fan, I am able to witness one of the greatest seasons in LSU football history.

I felt the same in the fall of 2003, at the ripe age of 25. Facebook was still four months away, if you can believe that.

But before the 2003 SEC title rematch between LSU and Georgia, they clashed in the regular season on an overcast afternoon in Tiger Stadium, in what would become a game for the ages.

“That Georgia game put LSU on the map,” said Matt Mauck, the Tigers’ starting quarterback in 2003. “It was our coming-out party.”

“To me, it was the game that turned the tide,” said Michael Bonnette, an LSU graduate and administrator at the school for the last 25 years. “It proved we belonged.”

Nick Saban was LSU’s head coach back then. His run-first, dominate-on-defense approach to the game is still something I look back on with nostalgia, despite how fun it has been to witness this year’s high octane attack.

In his Monday news conference that week, a stoic Saban downplayed the game, saying “The sky will not fall” if we lose. The Advocate blazoned a headline the next day that read “What big game?”

How apropos it was that Michael Clayton should be pointing to the sky in that photo. Because mere days later he would be pointing at fellow wide receiver Skyler Green in one of the most exhilarating moments ever in Death Valley. 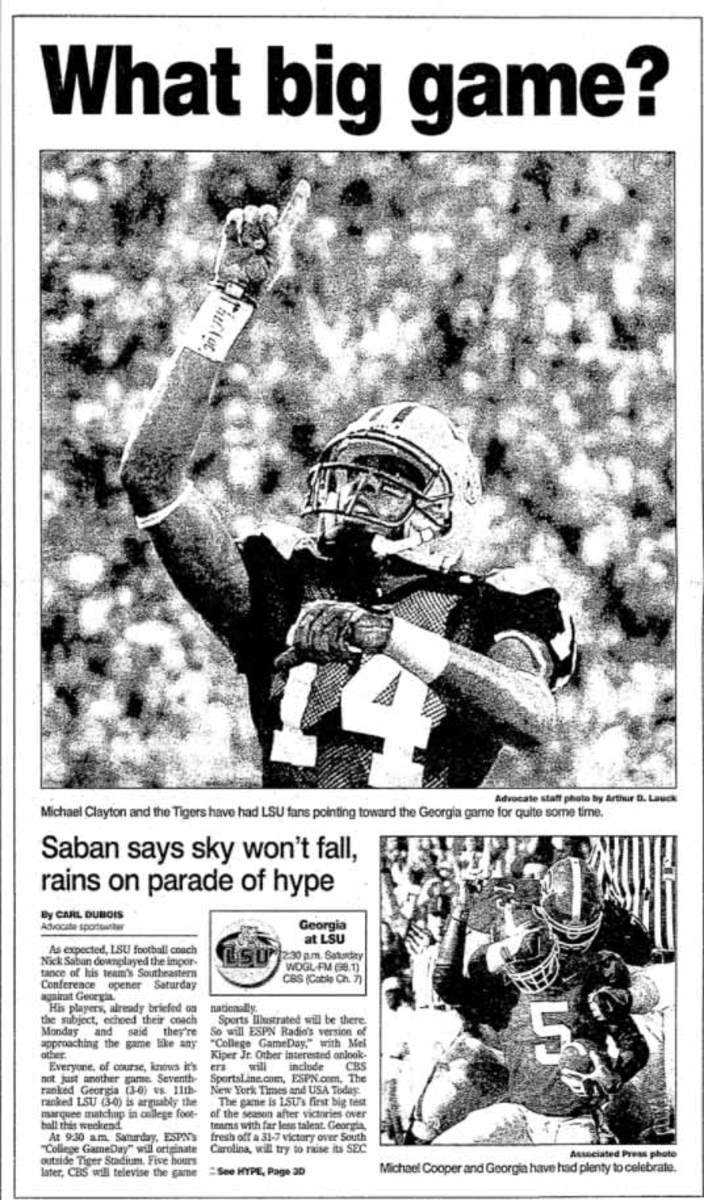 Everyone knew it. This game would be a defining moment in the Saban era.

Underdog LSU, ranked No. 10, and Georgia, coming off the 2002 SEC championship and ranked No. 7 met for a 2:30 CBS clash that would entertain a then-Tiger Stadium record crowd of 92,251 raucous fans that effectively erased the well-earned stigma that said Death Valley simply wasn’t as intimidating during the day. Even Lee Corso, ESPN College Gameday co-host, challenged the Tiger fans on set to bring their best, before he predicted an LSU victory by wearing the Mike the Tiger head. It was one of the most impressive crowds for an ESPN Gameday, and I remember co-host Kirk Herbstreit just looking behind him in awe at the sea of people behind him. When Corso put on that Tiger head, the explosion behind him was a sign of things to come.

Georgia looked to go up 10-0 in the first half before the Tigers forced a fumble deep in LSU territory. The momentum swung, and the swarming Tiger defense led the way to a 10-3 lead late into the fourth quarter. Old memories of Tiger choke-jobs in big game situations reared their ugly heads when Mauck fumbled on the Bulldog 15-yard line, effectively ending a game-clinching drive. On the very next Georgia snap, David Greene flipped a screen pass to Tyson Browning and 93 long and unbelievable yards later, the game was tied, just like that (3:45 mark in video above).

But then, it happened.

You started hearing something but weren’t exactly sure what it was. It couldn’t be. Couldn’t possibly be…

It started as a low murmur, then it grew. It spread across Death Valley like a swarm of ants, and soon it was as haunting as any noise heard that day. The Tiger faithful would not turn their backs or their confidence on their team, no matter how they felt. No matter how nervous they were that Georgia would rip their hearts out. It was as if the chant was just as much in support of themselves as a home crowd as it was for the team itself.

It was the never-quit, never-die attitude Saban had been preaching to both his team and the fans.

It was as if an entire program had finally arrived.

With just over four minutes left, Mauck and company immediately got back to work. And with just 1:22 left on the clock, as he was being drilled in the gut by a Bulldog defender, Mauck hit wide receiver Skyler Green–who had dropped key passes earlier in the game–for a 34-yard touchdown in the back of the endzone, a pivotal score in LSU lore that is captured in one of the most iconic photographs in the vault.

You can still hear LSU radio voice Jim Hawthorne making the call: “Mauck rolls to the near side. He’s looking. He throws it down deep and there’s Skyler Green! He’s got it! Touchdowwwwwwwn, Tigerrrrrs!”

Even as I type Hawthorne’s call of the play, it gives me chills. It was one of the greatest he ever made.

“He’s got it!” would be enough. 17-10 would stand. Georgia would advance the ball to the LSU 43-yard line, raising the Tiger faithful’s nerves yet again, but Corey Webster made a game-clinching interception with 32 seconds left. When he slid into the grass, you knew. You finally knew. LSU had done it. That one slide into a fetal-like position seemed to be a birth of sorts, a new beginning to this new team who seemed to have the resolve of a champion.

And it sent the record crowd into a frenzy that still ranks as one of the best game day environments in LSU history.

Said defensive end Marcus Spears after the game, “I want to say thank you to the fans because it was such a lift for us. We could feel the vibrations running through our bodies when they started hollering. We couldn’t hear anything. We couldn’t even get our defensive calls out there, so I know they had a problem with running their offense. It was just a great showing for us, and we thank them a lot.”

Said head coach Nick Saban, “That was a tough game. Georgia’s a good team. My hat is off to them. But I can’t tell you how proud of all the people who are responsible for allowing us to get the football players that we have here, the way they competed today. I’m just proud that we can just give a great win for our players and all those who support the program. I know how happy it makes them when we have success and it makes me happy that it makes them happy.”

It was the thankful and prideful tone of a player and a coach who maybe didn’t fully expect to win that Saturday afternoon. It was a point in LSU history where winning a national championship, or even making it to the SEC Championship game, was so far from the realm of possibility that surely everyone knew that that 10-10 score late in the fourth would somehow turn into 24-10 Georgia, or worse. But it didn’t. LSU exuded the mettle Coach Saban had been working to instill in the program for over three seasons. It showed thrillingly on that pivotal afternoon in September 2003, when the Tigers made their mark on the national landscape, and foreshadowed what dominance and championship glory was to come. 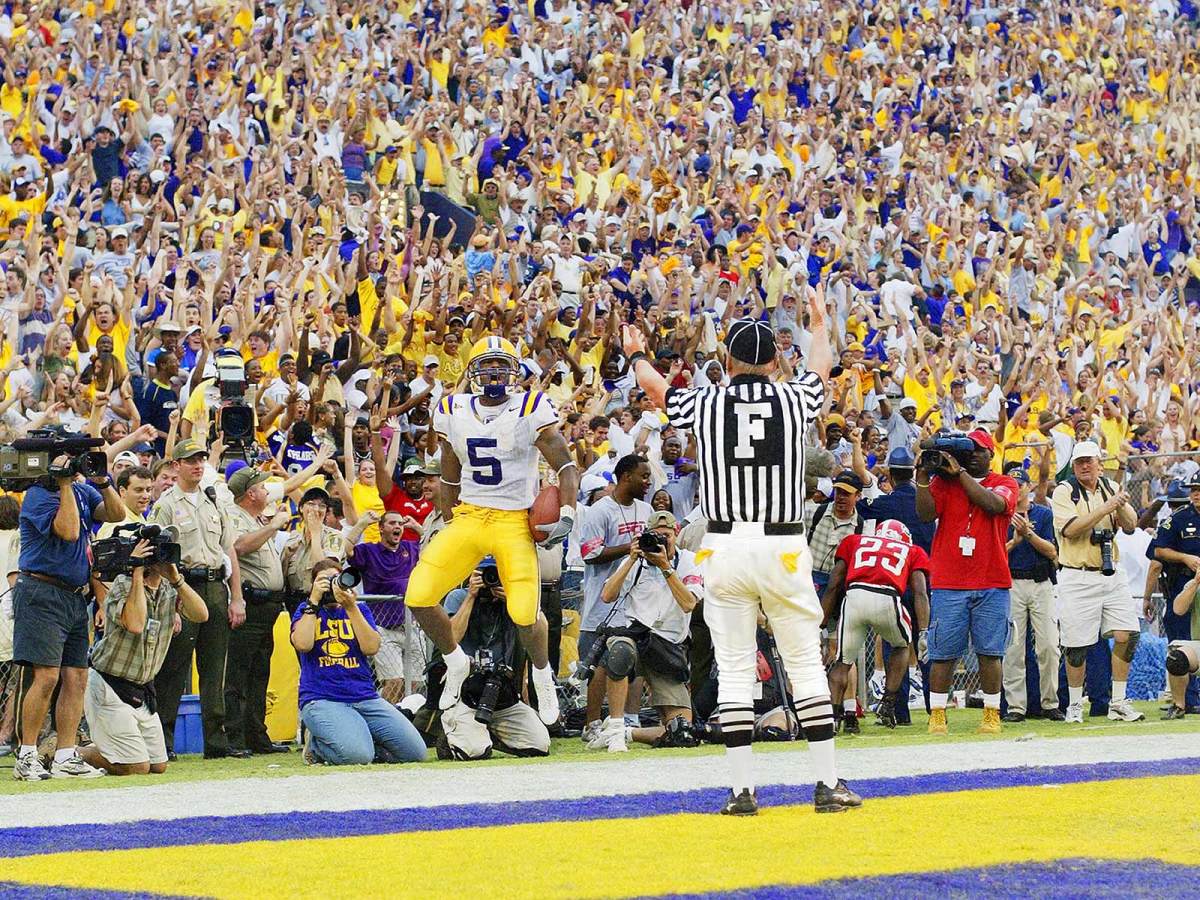