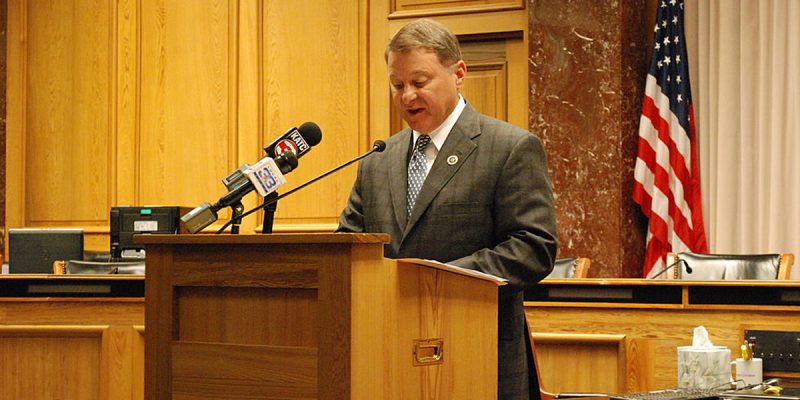 The slim hopes of Democrat Gov. John Bel Edwards to advance his agenda in a second term became even more microscopic if one media outlet’s story is accurate.

The Baton Rouge Advocate reported that enough votes have lined up behind Louisiana state Sen. Page Cortez to make him Senate president for the next four years. No other independent source has confirmed this yet, nor has Cortez himself.

If this comes to fruition, it will mark the first instance in decades of the chamber electing its leader without gubernatorial interference. It did, midway through Republican former Gov. Buddy Roemer’s term, replace Roemer’s backed leader with one of its own choosing supported by Democrat former Gov. Edwin Edwards who would defeat Roemer two years later.

John Bel Edwards avoided this disappointment four years ago. Republican current Sen. Pres. John Alario had completed one term helming the body under Republican former Gov. Bobby Jindal and retained the political heft to continue in the job under Edwards. More a conservative of convenience than anything else who in the last four years scored an average of 61 on the Louisiana Legislature Log voting scorecard (higher scores meaning more votes that favored conservative/reform preferences), Alario worked hand-in-hand with Edwards.

More importantly, Alario placed Edwards allies, mostly Democrats, on key committees to give that faction majorities and gave chairmanships of the most important committees to them. This resulted in rulership that perverted representative democracy and the will of the electorate by essentially giving the minority control over the chamber’s doings.

In recently-concluded elections for the 2020-24 term, the Senate swung to conservatives’ advantage with the  disproportionate exiting of moderates like Alario and their mostly conservative replacements. Where the 2016-20 Senate could be described as having a Republican majority split between conservatives and moderates and a Democrat minority almost exclusively liberal, GOP conservatives will outnumber their moderate brethren while the party as a whole has a 27-12 majority.

But, as it turns out, Cortez is one of those moderates. In fact, his LLL average over last term was, at 55, lower than Alario’s and also below the Republican chamber average of 63. On two other well-known scorecards, for the term he averaged 72 on the Louisiana Association of Business and Industry’s, and a 60 on the Louisiana Family Forum’s for 2019. (Alario scored 52 and 70, respectively.) However, those numbers won’t matter so much as will Cortez’s behavior concerning committee assignments.

Keep in mind that the real utility of Edwards having Alario as his bootlicker came not in how votes turned out on bills, but in what bills went to a vote in the first place. Any number of items, such as tax cuts, tort reform, client responsibility measures for Medicaid, etc. never hit the floor of the Senate because Alario had put enough Edwards allies in place on committees to short-circuit these kinds of bills. Had these made it to the floor, most if not all would have passed and would have put Edwards in multiple embarrassing situations where a veto of perhaps only one of these popular measures would have cost him reelection. Edwards owes his second term to Alario.

Cortez appears to be a compromise candidate between the full-spectrum conservatives and moderates who vote conveniently conservatively, where the conservatives finally backed him in exchange for prominent committee placings and leadership roles. As long as those of kinds of appointments transpire, conservatives will take heart at choosing someone not quite of their persuasion.

While Edwards will cringe. Even without that kind of lineup, he has no chance to enact things such as a minimum wage increase, any tax reform that raises income tax rates, or reversing education reforms, given the partisan distributions in both chambers. But with a Senate along those lines, he may even find it difficult to resist reining in of spending, so things like continued salary bumps in education will founder unless cuts elsewhere occur. Worse for him, with the Senate’s power not in his hands but in those who want to see right-sized government, the insatiable maw of Medicaid expansion will continue to gulp down huge amounts of money and he either will have to accept patient responsibility measures to temper that or cut elsewhere.

Citizens agreeing with the new Senate majority’s views should applaud the ascension of Cortez to the top job, as long as he steers clear of Edwards and follows through with committee assignments that reflect the will of the public voting majority.