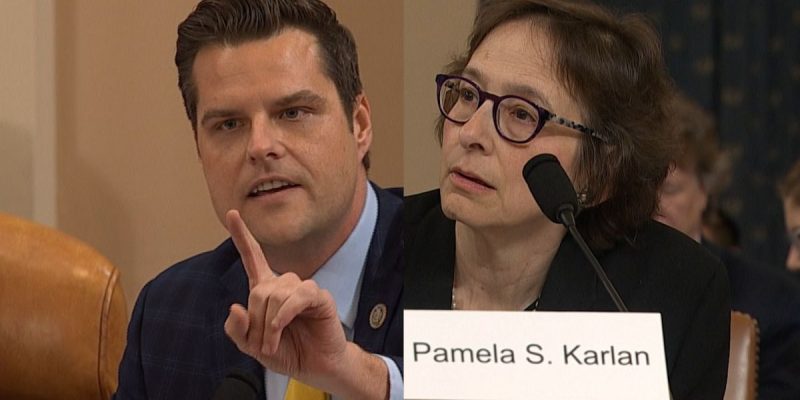 Democrats in the US House of Representatives took their impeachment effort to the Judiciary Committee this week where they hit a brick wall in the form of Congressman Matt Gaetz [R-FL].

The young conservative legislator did not waste any time, poking holes in Democrats’ accusations and meticulously picking apart their narrative.

Calling three witnesses to Republicans’ one, the stage was set Wednesday for yet another day of political posturing by Democrats.

Fortunately for the President, rising Republican star Rep. Matt Gaetz was more than prepared to go on the offensive and in spectacular fashion. The Florida native seemed to effortlessly expose the clear bias of all three so-called experts often by using their own words.

Rep. Gaetz was able to effectively expose the “impeachment inquiry” as nothing more than an attempt to reverse the 2016 election or at least damage the reputation of President Trump enough to cripple his re-election chances.

Gaetz’ first question went to Professor Gerhardt, asking if he gave money to the campaign of Barack Obama four times to which he confirmed his family did.

The Congressman then quoted Democrats’ witnesses’ writings which include accusations that a tweet, an advertisement and the “fake news” accusation could all qualify as impeachable.

Next, Gaetz read aloud one of the witnesses’ writings which clearly spelled out that Democrats’ sole purpose for the impeachment proceedings was to hurt President Trump in 2020.

Then it was Professor Pamela Karlan’s turn. Gaetz asked if she gave 1,000 to Elizabeth Warren, 1,200 to Barack Obama, and 2,000 to Hillary Clinton which she confirmed.

That’s when the fireworks really went off as Karlan snapped back at Gaetz after he essentially called her out of touch with Americans. The Congressman was having none of it. He scolded the professor for interrupting, “Excuse me! you don’t get to interrupt me on this time!”

Karlan is under fire for making a joke that invoked Baron Trump. The tactless move was called out by none other than First Lady Melania Trump who tweeted:

A minor child deserves privacy and should be kept out of politics. Pamela Karlan, you should be ashamed of your very angry and obviously biased public pandering, and using a child to do it.

Professor Karlan later apologized. For his finale, Rep. Gaetz asked the “experts” to raise their hand if they had any “personal knowledge” of fact relating to the accusation to which none did.

If wiretapping a political opponent is an impeachable offense, I look forward to reading that inspector general’s…