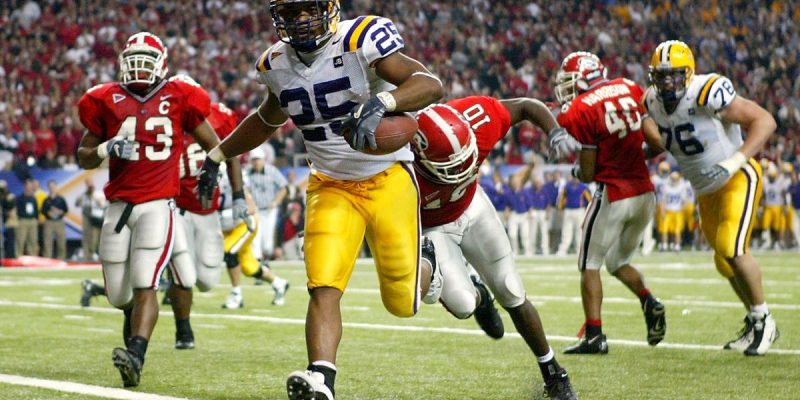 Later this afternoon, the high-powered LSU Tigers look to find another victory over Georgia in the SEC Championship game, in what will be the fourth clash in the conference title game between these two great programs since 2003.

Despite being ranked No. 1 in the AP and Coaches polls, in landslides at that, LSU continues to be seeded No. 2 in the College Football Playoff rankings. I would get into my opinion on the college football committee, but I will not be a hypocrite and contradict my recent article on Dabo Swinney. I am appreciative that, as a Tiger fan, I am able to witness one of the greatest seasons in LSU football history.

I felt the same in December of 2003, at the ripe age of 25. Facebook was still two months away, if you can believe that. The return to the classic SEC circle logo hadn’t even occurred yet.

Two months earlier in September, the Tigers had edged the Bulldogs 17-10 in an afternoon classic in Tiger Stadium. But despite Tiger nation’s excitement and anticipation for a possible SEC championship, much of the media were not convinced.

Leading into the rematch, Alberts’ sentiments were consistent with that of many media members. They drew attention to several what-ifs in the first game, such as if Georgia hadn’t fumbled away the ball on the LSU 18 while up 3-0 with 3:25 left in the first quarter. And the fact that Georgia missed three field goals in the first half, that Georgia’s dominant defense held LSU to eight three-and-outs on offense, including six in the first half. Basically, the naysayers said the Bulldogs did what it wanted with the Tigers, going up and down the field on the LSU defense but couldn’t avoid a slew of self-inflicted wounds that ultimately gave the game to the home team.

They pointed to the fact that Georgia outgained LSU 411 yards to 285.

Really, who could argue with any of this? If you asked most Tiger fans after that first game in September, they would have said that they wouldn’t want a rematch with the Bulldogs in the Georgia Dome, in the defending SEC champions’ backyard.

That rematch did happen, though, and it appeared it would be another heavyweight slugfest for much of the first quarter, as both defenses flexed their muscle. But with one play at the 4:50 mark, the No. 3 Tigers broke free, not only from their early-game struggles in this one, but from a seeming weight that felt as though they might have to get lucky again.

It was one play from freshman running back Justin Vincent that did it.

History would show that this, along with the national title game against Oklahoma, would be the plateau of Vincent’s disappointing career at LSU. But on this night, he earned MVP honors, setting a then-SEC championship game record with 201 yards rushing. His other long run was 62 yards, one in which he broke tackles and faked out defenders before finishing off the Bulldogs with a short touchdown run to begin the fourth quarter.

“We just wanted to go out there and dominate,” Vincent said.

LSU had established early on that this would not be the nail-biter the September game was. The Tigers built a 17-0 lead about six minutes into the second quarter.

Surely Mr Alberts had to have been hiding in the ESPN headquarters somewhere, maybe the restroom, pondering the prudence of his words.

LSU dominated the Georgia defense, rushing for 293 yards and outgaining the Bulldogs 444-249 total.

“There’s not much to say,” Georgia coach Mark Richt said. “We just got whipped.”

Indeed, they did. And so did many in the media. You couldn’t even feel vindicated against a Georgia program that LSU has never had any real rivalry or beef with. It was a vindication of sorts against those Trev Albertses of the world who miscalculated, misjudged, mistook the Tigers. They just flat got it wrong, and on that cold December day in 2003, the best team in America made sure they knew it.