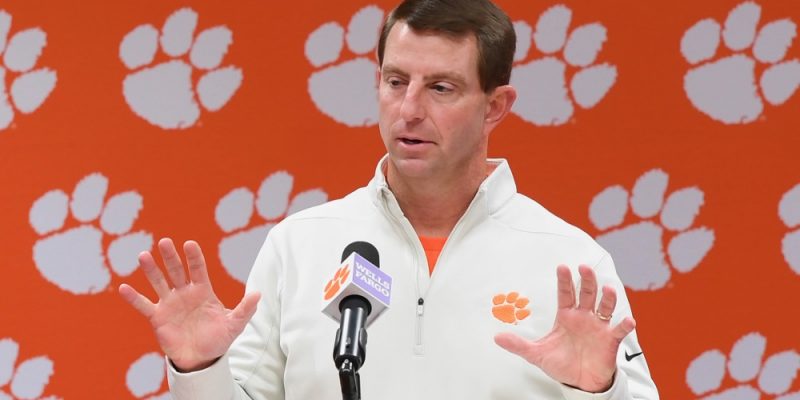 Hey, Dabo. You’re supposed to be one of the good guys. The anti-Saban. The coach no one has a problem liking.

Let’s not start politicking, especially when you don’t even have to, like that guy down there in Tuscaloosa.

Three years ago, the national anthem and NFL football became an incendiary topic across the country. While this issue didn’t specifically touch college football, a media member asked Clemson head coach Dabo Swinney his thoughts on it. While Dabo said that he would never punish a player for kneeling during the anthem, he was unequivocal in his opinion.

Dabo’s opinion then was strong, confident, kind, and well-articulated. It was an adult speaking like an adult.

But there is another side to Dabo, one he would do well to eliminate.

Lately the Clemson coach has let escape from his mouth some very paranoid, foolish things. Granted, every good person occasionally makes the untimely or wrong comment. And it is because Dabo has gained such respect over his coaching career, which started in an interim role like LSU head coach Ed Orgeron, that his overflow of words is so disappointing.

After beating South Carolina this past Saturday, Dabo continued what has become a theme for him in press conferences–his self-aggrandized jabs at the SEC.

“I know everyone says we don’t play anybody, but I think we’re 10-1 in our last 11 games against the SEC,” Swinney said , according to Marc Whiteman.

Yes, Dabo and his team have won a ton of games against the SEC in recent years. But they’ve also won a ton of games against everybody else too. Winning against the SEC in the past doesn’t make the conference his team plays in this year any good. Winning over the SEC over the course of several years also has zero bearing on this year’s overall schedule, especially when the two SEC teams he did beat this season are 7-5 (Texas A&M) and 4-8 (South Carolina).

For a man of Dabo’s seeming intelligence, it should occur to him that these comments about years past not only come off as petulant, but just flat silly. It’s like the gaslighter in psychology who swears the grass is purple with pink stripes when you know what color the damn grass is.

His antics showed up again earlier today, when he went on a self-pity-driven monologue about how disrespected his team is.

And that was about five percent of the entire transcript.

How are you not getting the benefit of the doubt, Dabo? Who’s disrespecting you? Who? Who’s disrespecting your team when the playoff committee has you at No. 3 in the country, when nearly every segment on ESPN talks about how powerful and dangerous your team is despite the weak schedule, when analyst after analyst continues to say that who is No. 1 and No. 2 at the end of the season matters, because no one wants to be No. 2, opposite, you got it, Clemson.

Heck they even have me as an LSU fan worried we can’t play with you.

There is no one disrespecting your team, Coach. Just because someone questioned your boys earlier in the year, when you barely beat a lowly North Carolina team, doesn’t mean you have to hold it in your memory like some kind of bear trap. You talk about media members moonwalking like Michael Jackson on that Carolina analysis now to compliment your team, as though that is something wrong. What exactly is wrong with analysts recognizing that your team has improved drastically since then? What is wrong with that, Dabo? Why do you think it’s some type of honor that you don’t have “amnesia,” as you call it, but ridicule the media for having it?

I must say, the passion and love you have for your players, and the way you go to bat for them, is one of the reasons I like you.

But all you have to do is keep it there.

Look, I think the media is a joke too sometimes. I think their canned opinions are just there for entertainment purposes. But all you’re doing when you go on these long-winded rants is succumbing to their level. Do you want the media to respect your team or not? Because you can’t say the media doesn’t respect you in one breath and then get upset that they change their opinion about you between an abysmal performance against North Carolina to now. The media loves you now, have for several weeks now. Now is all that should matter when you are three games away from winning a national championship. Just accept the praise you so lavishly are getting and stop trying to find this artificial way to motivate your team. Because all it comes across as is self-serving and foolish.

It definitely doesn’t come across as the man I brag about to people when I tell them that you didn’t think America had a race problem, that you thought it had a sin problem.

That moved me, man.

C’mon, Dabo. You’re supposed to be one of those coaches that believe in virtue. You’re supposed to be the man who represents one of the most respectable programs in college football with honor and integrity. Leave the passive-aggressive, childish squabbling to those guys on ESPN and just take the higher road. Don’t fall into the very sin problem you yourself mentioned three years ago. I love you because you’re my neighbor like your Bible says. Let’s get it together, my man. Because you’re better than that.

Interested in more national news? We've got you covered! See More National News
Previous Article Next U.S. Secretary of Energy is a Louisianan
Next Article Texas No.1 destination for companies leaving California for last 12 years