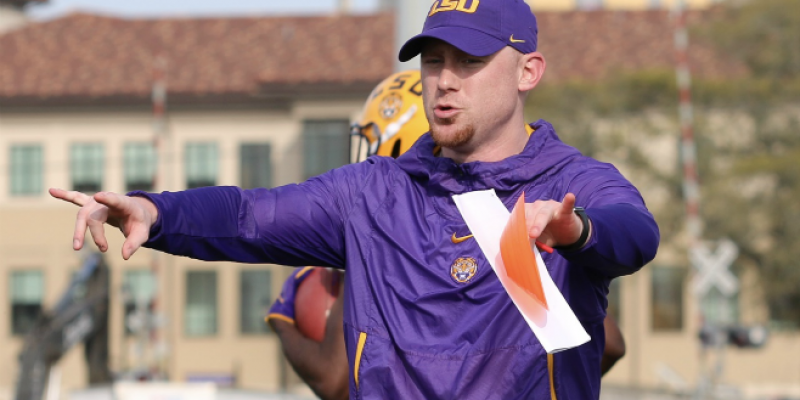 There’s a funny thing about the name of LSU passing coordinator Joe Brady. You see his first name, which is the same as his soon-to-be Heisman winning quarterback, and his last, which is the surname of perhaps the greatest NFL quarterback of all time, and you have quite the little word craft going on.

Burrow could very well end up being a Tom Brady-type NFL quarterback, and he largely has Joe Brady to thank for that. Brady has also been uniquely responsible in leading an LSU offense that has shattered records this season, and in placing the program on the cusp of its fourth national championship.

On Monday, Brady was named one of five finalists for the Broyles Award, which is presented to the nation’s top college assistant coach.

With such greatness abound, in both pedigree and name, it is no surprise that programs across the country will be interested in luring Brady away from LSU. The most notable suitor is the Texas Longhorns, who appear to be ready to drop a dump-load truck of dollars at the young offensive guru.

Of course Texas just did that two years ago when it hired Tom Herman, who was once an up-and-coming offensive guru himself, and who had been reported by ESPN to be headed to Baton Rouge to succeed Les Miles (and Ed Orgeron, who was then serving an interim role) as the next LSU head coach. His annual salary at $5.2 million, Herman, who was offensive coordinator and national champion at Ohio State before putting Houston on the national stage as head coach, is now feeling the heat of the Austin fanbase. A 7-5 season after a Sugar Bowl victory last season has forced Herman to fire both coordinators.

It appears Brady is in Herman’s sights to save his hide. Perhaps Herman should just take over the offensive play calling duties, because there’s no way Joe Brady is leaving LSU for such an unstable position, where the natives could run yet another “savior” coach in Tom Herman out of town after next year. At 7-5 in the Big 12, Texas simply cannot compare to an LSU program primed for a national championship this season and stockpiled with offensive talent for next.

Head coach Ed Orgeron said LSU has “a plan in place” and that they are “a step ahead in keeping Brady in Baton Rouge.

And if takes more than that, expect Orgeron and LSU to do it. This offense has become a once-in-a-generation attack and no one in Baton Rouge wants this to be a one-and-done scenario.

The Tigers rank No. 2 nationally in total offense and scoring. Players have been shattering records all over the field. Burrow’s legendary season has been duly noted. He broke the SEC record for passing yards in a season this past Saturday, and is tied for the conference record for touchdowns in a season with 47.

Wide receiver Ja’Marr Chase, a finalist for the Biletnikoff Award, is maybe the most underrated player in America. If he played for Ohio State or Alabama they’d be calling him the greatest college football player of all time. As it is, he will have to settle, unfairly, for not being invited to New York with his teammate Burrow for the Heisman ceremony. Despite being overlooked, Chase looks NFL ready right now, holding the school record for touchdowns (17) and leading the SEC in receiving yards (1,457).

All of this firepower has been under the trigger of Joe Brady, and of course Steve Ensminger, the official offensive coordinator of LSU. Ensminger’s humility in itself should be the topic of a feature story. He outranks Brady, but it is the young 29-year-old that everyone talks about as the general who brought LSU’s offense not only into the 21st century, but into the record books as well.

Look for Ensminger to take on a different role in one or two years, allowing for the Tigers to keep the young Brady just a little longer before some big time program comes in and scoops him up to be their next head coach. As strong as the relationship is between Ensminger and Brady, and given Ensminger’s humility (he seriously considered not agreeing to take the offensive coordinator position two years ago because of his family), expect him to redirect the tail-end of his career to allow Joe the chance to hold a more official title, and allow LSU to squeeze as much as they can out of him before he carries his craft–that is more than just words–to some very fortunate football program.

Interested in more news from Louisiana? We've got you covered! See More Louisiana News
Previous Article HARTMAN: Dear Mayor Cantrell, What Was That Again?
Next Article It’s Crucial That Louisiana’s House Democrats Don’t Have A Say In Who Its Speaker Is