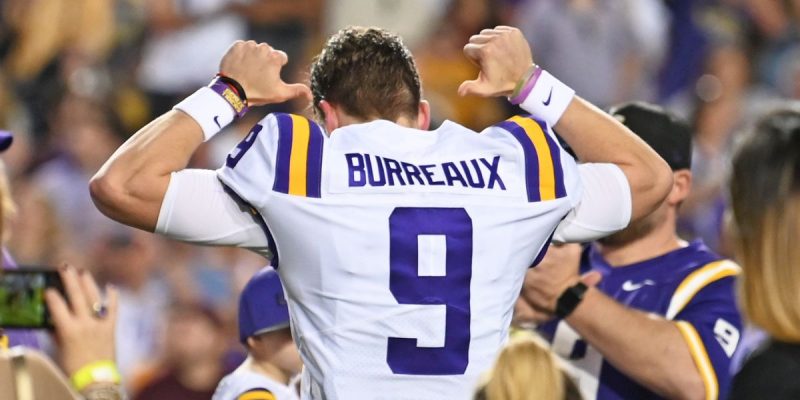 On Saturday night in Death Valley, Joe Burrow changed his name before the game, and then changed the SEC record books during it.

In quarterbacking a 50-7 beatdown on the Texas A&M Aggies, the LSU senior cemented himself as one of the greatest Tigers of all time. But it was a special night for more than just reasons outlined on the scoreboard. Burrow, apparently without his head coach’s permission, ran out onto the field for the senior ceremony with a jersey reading “Burreaux” on the back.

Too bad NCAA rules didn’t allow for him to wear it during the game itself.

“I thought it would be an awesome tribute to the state, to the university…I think it was great,” said Burreaux after the game. “It’s been awesome not only for me, but for my family as well. … I’m going to miss it with all my heart and I couldn’t be more grateful.”

When asked if he’d informed Coach O of his decision, he gave the media his typical wry grin and said, “Umm…no.”

It is doubtful that Coach Orgeron will have anything to say about Burrow’s little scheme. Orgeron himself, of course, bleeds Louisiana through and through, and is affectionately known as “Coach Eaux.” He knows well the Cajunification of the “O” sound.

Too bad “Heisman” doesn’t have that “O” sound in it.

At one point early last year Burrow’s meal of choice and the fact that he always wears one sock inside out were the big topics of conversation. Now, Burrow has etched his name in SEC lore as one of the greatest of all time.

And he is a lock to win the Heisman.

On an 11-yard completion to running back Clyde Edwards-Helaire, Burrow passed Kentucky quarterback and former No. 1 NFL draft pick Tim Couch for the most passing yards in a single season. With his 352 yards Saturday night, Burrow now stands at 4,366 yards, surpassing Couch’s 4,275 in 1998.

This small town Ohio kid is truly a Louisiana legend. And his Twitter post after the game showed both his acumen for poetry and his sincere love for the state that embraced him after few others would even look his way.

“A tribute to this great state and university. Death Valley, where opponents dreams come to die … but where mine came true.”

And there are still three games left. Eaux what fun it is to ride.

Interested in more news from Louisiana? We've got you covered! See More Louisiana News
Previous Article GEAUX AUBURN: Everyone in America Will Be a War Eagles Fan for Iron Bowl
Next Article Poll: Majority of voters across party lines want Congress to address $23 trillion national debt