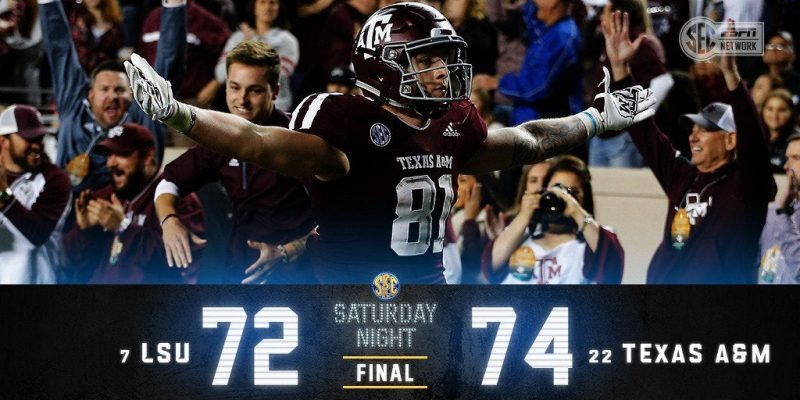 In his Monday press conference, LSU head coach Ed Orgeron tried his best to hide the truth about the Texas A&M game this Saturday.

Anyone who saw the 2018 game in College Station knows that both Orgeron and his team are not simply going “to let that thing go,” as he said in his press conference. Because mere moments later he’d say, “We just felt helpless and then we just felt that when our time comes we’re going to do something about it, and now’s the time.”

Human nature makes this one clear: LSU will be out to break the lights on the Tiger Stadium scoreboard Saturday night.

The final score on the board last year, after seven overtimes, read 74-72. It was the highest scoring game in FBS history. Only about an hour before, the Tigers led 31-24 with the ball in the waning seconds. Victory was apparently secure. Even the players doused Coach O with a Gatorade bath.

Wait, the officials said, with improbable speed. Let’s take this one to instant replay. Upon further review, it was determined that Texas A&M quarterback Kellen Mond’s knee had hit the ground before throwing the would-be game-ending interception. As a result, the Aggies kept possession and Mond subsequently threw the game-tying touchdown pass on the final play of the game.

The officials, admittedly, got this call right. But their miraculously quick cerebral prowess was nowhere on display later when an apparent fumble by A&M–that would have sealed the win for LSU in the first overtime–was conspicuously never reviewed on replay, despite a lengthy, informal discussion between the referees, Orgeron, and the replay official.

No improbable speed on this call. Nope, no formal review on this one.

And it was just the beginning of a surreal, frustrating night when you as a Tiger fan just knew that, in the end, your Tigers would not end up getting any call of relevance to go your way, when you knew that a gut-wrenching loss was imminent.

Yes, a 10-3 finish with a Fiesta Bowl victory over No. 7 Central Florida over a month later equates to a successful season. But how much better does 11-2 look?

Orgeron has his team poised for a 12-0 finish before the SEC Championship game against Georgia on December 7. A college football playoff berth still hangs in the balance. There are plenty of reasons to win the game Saturday, and 31-24, in the grand scheme of the national championship chase, would not be any different from any other margin of victory.

When a media member asked Orgeron if he thought it would be a good idea to make sure the team, and no one else, takes care of the outcome, Orgeron seemed to act as if the thought had never crossed his mind.

“That’s a good point,” he said. “I’m going to mention that. That’s a good point. I told them that after the game. I said, you know, although those things happen, we’ve got to look at the plays that we could have played, the plays–let’s face it, we didn’t play well on defense. I watched the film again this morning. There’s a lot of things that we’ve got to get better at starting today.”

One thing they very well will get better at is scoring more than 31 points in regulation. And Coach O, we as Tiger fans know, and we are hoping with bated breath, that if you get the chance to hang 72 on these guys, no matter what the score is, that you’ll let Burrow and the boys do it.