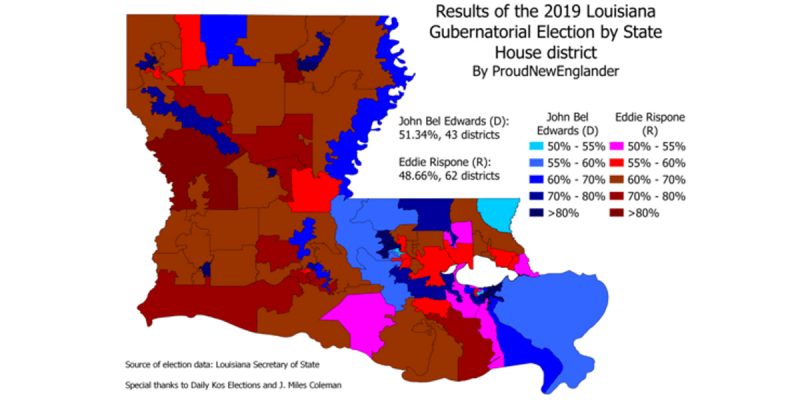 Paint political phenomena with too broad of a brush and your risk erroneous analysis, which some observers did regarding Louisiana’s 2019 gubernatorial election.

In the wake of incumbent Democrat Gov. John Bel Edwards narrow win over Republican Eddie Rispone, some analysts identified voting patterns in suburbs as a key. Rispone easily dispatched Edwards in rural parishes in winning 40 of the state’s 64 parishes, while Edwards countered with an overwhelming victory in Orleans (New Orleans) and comfortable wins in East Baton Rouge (Baton Rouge) and Caddo (Shreveport).

Given that Edwards outlasted Rispone by only around 40,000 votes, it might appear that “suburbs” made the difference. Jefferson Parish, just west of Orleans, gave four-sevenths of its vote to Edwards, and in East Baton Rouge, where about half the population doesn’t live in the city, Edwards took two-thirds of those ballots.

Reviewing these results with other states in the 2019 election cycles, where Democrats did better that seemed to fit the pattern of suburbs turning purple to the detriment of Republican candidates. Yet this misreads that the suburbs themselves have changed towards a more bifurcated typology.

Suburbia as a concept have changed since the first of these developed around a century ago. Over the past few decades suburbs have transformed roughly into two types. “Mature” suburbs have existed longer temporally and typically closer geographically to their central cities than “developing” ones. On sociological criteria, mature suburbs tend to appear more like the neighboring central city, with relatively higher crime rates, higher poverty rates, lower educational attainment, and lower incomes. Associated with these characteristics, mature suburbs also have fewer whites and more younger people.

Jefferson fits the mature profile. According to the latest data, about 85 percent of its population has a high school diploma, it has a median annual household income of around $50,000, and about a sixth of its population resides in poverty. It has a median age of 39 and about 53 percent white population. These figures don’t deviate much from statewide figures in these categories, in doing better on poverty and income but with a smaller white portion of the population.

These statistics contrast greatly with the developing suburb across Lake Pontchartrain from New Orleans, St. Tammany Parish. Nearly 90 percent there have a high school diploma, with a median annual household income of over $66,000 while fewer than one-ninth reside in poverty. Its median age tickles 40 and has a white population of 79 percent. There, Edwards picked up just two-fifths of the vote.

This has more in common with Shreveport’s significant suburb, Bossier Parish. Almost as a high of a proportion of its citizens have a high school diploma as in St. Tammany and its white population is 75 percent, although its income and poverty figures are only a bit better than Jefferson’s. Edwards received only a third of the vote there.

To the east of East Baton Rouge, Edwards did worse still in Livingston Parish, garnering a measly three-tenths of the vote. Its high school diploma rate matches Jefferson, but its households make $10,000 more a year and three percent fewer live in poverty. Whites comprise seven-eighths of its residents.

Within East Baton Rouge, a majority of those living in the boundaries of the incipient city of St. George voted against Edwards. And in Ouachita Parish, even as Edwards lost it with only 46 percent of the vote, that came with Rispone racking up margins in the 70 percent range in suburban Ouachita Parish while Edwards rolled up votes in the 75 percent range in the central city Monroe. Back out Monroe, and the remaining parish has similar sociological figures as does Bossier except for age (Bossier’s transient military population makes it much younger).

In reality, Democrats did better in Louisiana suburbs not because of conversion of suburban voters, but that the nature of the state’s suburbs is changing. Older ones like Jefferson and in East Baton Rouge outside the central city increasingly look and electorally behave like their nearby central cities. Newer ones continue to give strong majorities to Republicans. Analyzing validly election results in the future requires differentiating between the two.