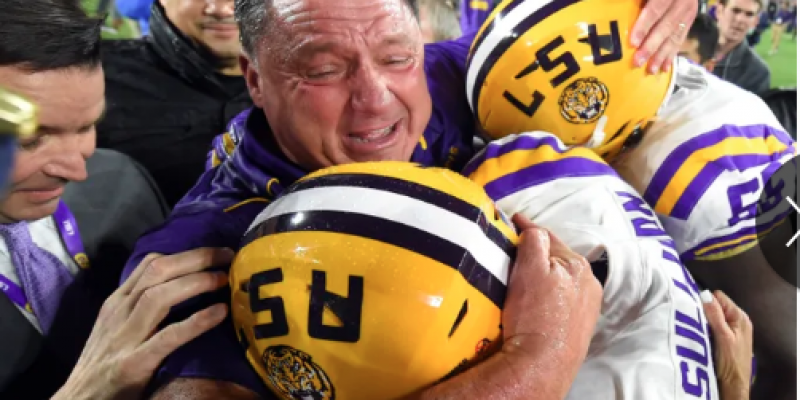 He is on top of the college football world now, a leading candidate for national coach of the year, but he has had to get here by rising from a pile of self-inflicted ashes.

In ancient mythology of many cultures, there is the powerful example of the Phoenix, a bird that achieves immortality by burning itself into ashes at set intervals, and then rising again to a new life before the cycle repeats itself again.

Such mythology is not typically coupled with the world of rough and tough college football, but the symbolism of the powerful mythological animal is actually the stuff of what sports are made of.

In particular, what LSU head coach Ed Orgeron is made of.

The fiery head coach is in the midst of his own rise from the ashes, ashes of the self-inflicted variety. He is currently the head coach of the top-ranked team in the nation, but he wasn’t always flying this high.

While coaching such legends as Cortez Kennedy, Russell Maryland, Warren Sapp, and even Dwayne “The Rock” Johnson (yes, that “The Rock”) Orgeron was dismissed from the Miami Hurricane coaching staff. It was a difficult time for Orgeron and his family, for he knew he had a good position with a powerful football program before blowing it.

But even then, he had the right attitude about it. He viewed his crash and burn into ashes as a necessary occurrence.

“Yes,” he said fifteen years ago. “It was. Yes. It led to a turnaround in my lifestyle. That’s something that had to be done in my life.”

Effectively humbled, Orgeron moved back to Larose, Louisiana where his father, as any good parent will do, helped him kick some of the dust off his feathers.

His next coaching gig would force him to summon even more humility. Ready for a fresh start and a second chance, Coach O got it. But he’d have to swallow his pride yet again to do it. In 1994, he was brought on by Nicholls State to be linebackers coach, but only as a volunteer.

Finally, the next year, he secured the position of defensive line coach at Syracuse, where he stayed for three seasons. Following that was a successful seven-year tenure as an assistant at powerhouse USC, where he was named assistant head coach (2003) and Recruiting Coordinator of the Year (2004).

That rise from the Miami ashes seemed complete when the Ole Miss Rebels hired Orgeron to be the head coach entering the 2005 season.

And then he crashed again.

The three seasons as Rebel head coach were an abject failure. Ole Miss beat only two teams with winning records during Orgeron’s tenure, and the team finished 0-8 in the SEC in 2007, its first winless conference campaign since 1982. Orgeron was fired after the Rebels’ collapse in the Egg Bowl in late November.

(Meanwhile, the program Orgeron runs now was on its way to winning the 2007 National Championship under Les Miles.)

Before he’d even had a chance to truly fly again, Coach O was burning in the ashes once more.

After two seasons with the New Orleans Saints and Tennessee Volunteers, respectively, Orgeron was hired again by the USC Trojans. And when head coach Lane Kiffin was fired, the interim tag went to Orgeron.

He knew he had to redeem himself for the Ole Miss debacle. So he changed. That humility he’d maybe learned from the Miami dismissal inspired him to change his entire philosophy on running a team.

After his experience at Ole Miss, Orgeron decided to approach his second stint as a head coach differently. Instead of resuming the intense aggressiveness he had used as a defensive line and head coach, he used a different approach this time. Orgeron applied behavioral techniques he had used on his own teenage children, in an effort to approach his USC players “like my sons.”

Orgeron went 6-2, including a win over highly ranked Stanford. But it wasn’t enough.

Steve Sarkisian was hired to be the next USC head coach.

And with that jilting, that next fiery crash in the cycle, Orgeron resigned.

It seemed as if Orgeron might never get another chance to run a big-time college program. But he didn’t quit. He kept getting up every day to grind, and was hired by Les Miles to coach the defensive line at LSU in 2015.

He was promoted to interim coach of the Tigers when Miles was fired four games into the 2016 campaign, then was unceremoniously shoved down the list of potential permanent candidates after the season was over.

The ashes were real again. It seemed his professional and personal past just wasn’t as squeaky clean as most would have liked.

Said Verge Ausberry, a longtime LSU administrator, “O and I sat down in his office while he was interim coach in 2016. I asked him why he wanted this job.”

“You know, Verge. I’ve got to redeem myself for Ole Miss. I messed some things up.”

In the end, the LSU job was his. And three years later, here we are.

LSU is ranked No. 1 in the country, fresh off a victory over Alabama eight long years in the making, fresh off outscoring an Alabama offense coordinated by none other than Steve Sarkisian.

He likely has his own personal Phoenix memoir to tell.

Coach Orgeron’s is a story that everyone can learn from, a story that the world of sports provides us with every single day. No, the Phoenix is not a real bird, you won’t be seeing it outside your living room window, but its self-induced burning in the ashes and subsequent rise from them can provide a great lesson for everyone. It is a lesson of hope and inspiration for the dejected, just like Coach O, just like all of us, who must find a way to rise above defeat or be forever mired in the ashes.