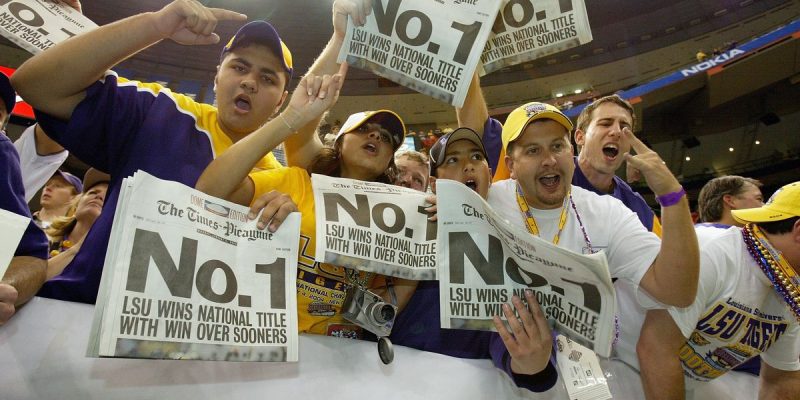 The season was one no LSU football fan will ever forget. And sixteen years later, it has created an unlikely intersection between rivals that never were.

January 5, 2004. It was perhaps the most controversial day in the BCS era. The Southern California Trojans were voted No. 1 in the AP poll, while LSU was tabbed No. 1 in the ESPN/USA Today Coaches poll. It was the dreaded split national championship that the BCS system was supposed to correct.

USC, led by quarterback Matt Leinhart finished the season 11-1 and at the top of both human polls. LSU (12-1) and SEC champions, finished at No. 2. The shocker that threw everything into chaos was when powerhouse and “unbeatable” Oklahoma was trounced in their Big 12 conference championship game.

Even before that game, commentators had joked, not actually believing the Sooners would lose, that Oklahoma was so far ahead in the BCS standings that they could afford a defeat and still get in.

No one was laughing when it actually  happened.

Despite being ranked No. 3 in both human polls, Oklahoma was favored by the computers enough to keep them at No. 1, thereby placing them in the championship game against LSU.

USC played in the Rose Bowl, where it defeated a good two-loss Michigan team 28-14. The AP voters made a statement by keeping them at No. 1 the next morning.

LSU beat Oklahoma and its Heisman winning quarterback Jason White 21-14 in the Sugar Bowl. The coaches were contractually obligated to select the BCS winner, and LSU ended the season No. 1 in that poll.

It was the dreaded split national championship, at least in the media’s mind.

And the dreaded controversy that LSU fans shouldn’t have had to deal with.

Ted Waitt, CEO of Gateway Computers, would offer the NCAA $30 million to setup a winner-take-all game between the Tigers and the Trojans.

But the matchup never took place. It would become a rivalry that never was.

Fast forward sixteen years, and one of those coincidences occurred where the past meets the present.

On Saturday, moments after LSU dismantled Alabama, which of course is coached by the same Nick Saban who coached LSU to that national title in 2003, the panel on Fox College Football discussed the game. Reggie Bush, the once-in-a-generation tailback who arrived at USC a year later in 2004, gushed over LSU, but it was the reason that he did so that was interesting.

“I was happy for Coach Orgeron because I’ve seen just the progress and the work and the things he’s had to overcome, the adversity, throughout his coaching career. And to see him now, at the top in the SEC and in the nation…it’s amazing to see because obviously we have a personal relationship with him. He’s the reason I went to USC when he was there.”

Hearing that must have been even more sweet redemption for Coach O. He loves his players, past and present.

Bush and Fox co-host Matt Leinhart would lead the Trojans to a runaway national title in 2004. They trounced Oklahoma 55-19, beating the Sooners to a pulp as if an entire jilted football program were also releasing its pent up anger from being left out of the official championship game a year earlier. Leinhart, that year’s Heisman trophy winner, followed Bush’s remarks about Coach O with a simple comment about LSU quarterback Joe Burrow.

On set, he emphatically handed Burrow the Heisman trophy in this, just the first week of November.

“He has been the biggest and best on the biggest stage every single week, and this [game] sealed it for him.”

You would have sworn that these former Trojans would have put on the purple and gold for Coach O had he been LSU’s head coach back in the early 2000s.

To hear two Trojan Heisman trophy winners (Bush would beat out his teammate the next season for the award) gush about the LSU football team was somewhat surreal for me, a lifelong LSU fan who always pictured, probably erroneously, that all things USC have a grudge against all things LSU. It is likely the mythology that is college football and what that story did to the landscape of the sport that has made me feel that way.

And maybe it was just my own fan-angst at having to see USC win that 2004 national title outright and unfairly legitimize their 2003 AP championship in the unjust eyes of the media.

Whatever it was, it did something to me to watch Bush and Leinhart praise LSU. 2003 hasn’t mattered like it used to in many years, but it matters even less now. At least two Trojans out there are Tiger fans today, and it’s good to know LSU’s victory over Alabama is getting the respect it deserves from two rivals that never were.