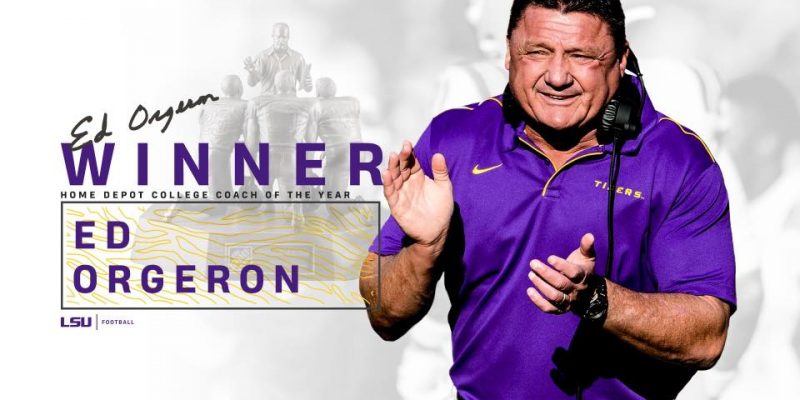 Coach Ed Orgeron could very well be the head coach of the USC Trojans right now. And things would be a whole lot different.

The once proud USC football program continues to spiral in mediocrity. The LSU Tigers, meanwhile, have feasted on USC’s “scraps” and are on the cusp of a national championship.

Six years ago in 2013, USC had the opportunity to hire interim head coach Ed Orgeron for the full time job. Coach O had just led the Trojans to a 6-2 mark down the stretch, including a victory over highly ranked Stanford.

It wasn’t enough, however. USC hired Steve Sarkisian instead, who, as fate would have it, is the offensive coordinator of the Alabama Crimson Tide, whom Coach O and company topped in Tuscaloosa earlier this year.

Bruce Feldman, a college football reporter, appeared on the Rich Eisen Show this week, where the host asked him how USC could “miss on him,” a coach “straight from the water boy, perfect for LSU.”

The fact that Eisen used a ridiculous spoof film to describe what is “perfect” for LSU–and therefore this southern state, presumably–is telling about what Eisen thinks, especially since he doubled down on his question by declaring, “I’m serious.” And it is very much in line with what much of the north and west think about southern states like Louisiana.

“I think what you have is a guy who has continued to evolve. He made a huge jump from when he was at Ole Miss to when he was at USC. I think he’s made a significant jump after that, but I really think it’s a USC issue. You have a lot of people at USC, especially during the Pat Haden regime, who couldn’t get past what Ed Orgeron sounded like. They didn’t listen to the players. They didn’t listen to the staff. At the end of the day, Ed Oregeron is not a country club guy. I think he can relate to just about anyone. The Governor of Louisiana was waiting outside the locker room. He’s very street smart, and I think that’s one of the things that made him a very good recruiter. He can read people very well. I don’t think Pat Haden, who was the decision maker at the time, that’s just not the type of guy he wanted. I just don’t think he could get past it.”

Orgeron has amassed 38 wins in his short tenure at LSU. Sixteen have come against opponents ranked in the Top 25, including ten teams in the Top 10.

A lot of former USC players and coaches believed in Coach Orgeron. It’s just that the powers-that-be didn’t.

I wonder what those folks on the west coast think of Coach O being named the latest Home Depot National Coach of the Year. I wonder if any of those bells over there are ringing from realizing what a mistake that decision was to go with Sarkisian over Orgeron.

Yessir, the happiest state in the Union is celebrating its coach and its team like it’s 2003 down here. It’s fine that much of the rest of the country makes fun of us. It’s fine if Feldman is right and those southern Californians didn’t think much of Coach O. It’s all fine. Because their trash is our treasure, their loss is our gain. It’s the reason why USC will be playing Iowa State in the Holiday Bowl and LSU will be battling Oklahoma in the semifinals of the College Football Playoff.

Ahhhh, LSU vs Oklahoma. That should ring a bell for USC fans too.