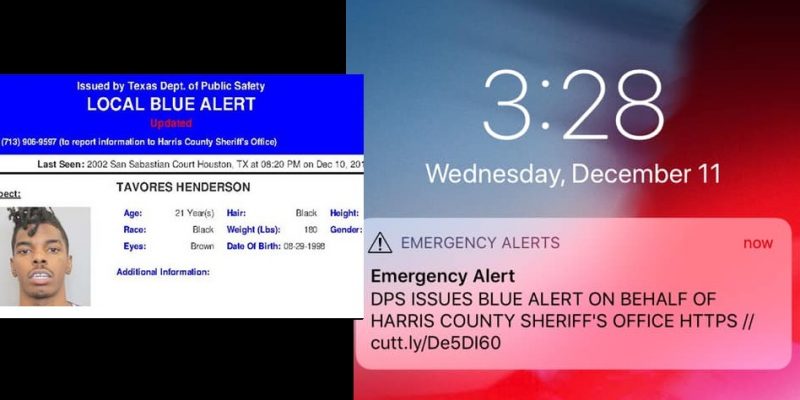 A Houston-area police officer was killed yesterday — the second such tragedy in a week. The death sparked a massive dragnet for the suspect, which covered counties north and south along the Interstate 35 corridor.

The search was followed by the rare issuance of a Blue Alert, which prompts most cell phones and breaks into over-the-air programming when activated.

Nassau Bay Police Sgt. Kaila Sullivan died after being hit by a Jeep during a traffic stop Tuesday night.

Tavores Dewayne Henderson, 21, is wanted in connection to Sullivan’s death. He is described as a black man, 5 feet 7 inches tall, 130 pounds, and may be armed and dangerous. He was wanted on a domestic violence charge and fled the traffic stop, according to the Associated Press and local sources. Henderson may still have one handcuff attached to his wrist. He is pictured in the feature image of this article.

Established by the Blue Alert Foundation, Inc., and adopted by state and local governments, the system is designed to “speed the apprehension of violent criminals who kill or seriously injure local, state, or federal law enforcement officers.”

The Blue Alert was launched in Texas in 2008 when Gov. Rick Perry issued Executive Order RP-68. Four criteria must be met before the alert can be issued:

The maximum alert duration is 24 hours.

In Texas, in addition to the Blue, Amber, and Silver alerts, there is also the CLEAR Alert, pertaining to missing adults in immediate danger, and the Camo Alert, for current or former military members with mental illness who may isolate themselves or disappear without notice.