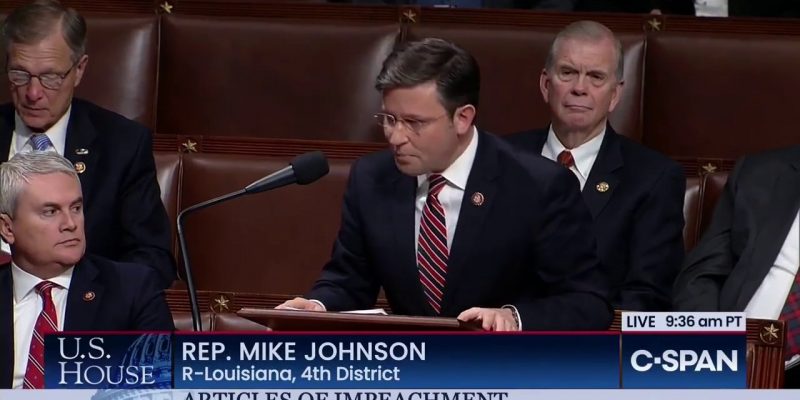 There isn’t much else to say about the impeachment mess going on in Congress today, at least not that we haven’t already said, but we’d be remiss if we didn’t throw this out. It’s the two-minute floor speech Rep. Mike Johnson gave as the proceedings dragged on, and it sums up perfectly the stupidity and abuse that the Hard Left’s impeachment ideas constitute.

As good as that was, Johnson couldn’t quite top Brit Hume, who wins the day with his matter-of-fact takedown of Adam Schiff…

“Do you think he’ll get called on the carpet by anybody who has been following this story for two years?” Bream asked.
“Well, one of the wonders, to me, of modern media is the failure of my colleagues in this business to see through this guy Schiff,” Hume said. “He has been dishonest repeatedly. He made extravagant claims about the amount of evidence he had of Russia collusion, evidence that it turned out that not even the Mueller team with all of its investigative powers did not discover and that he, Schiff, never specified. Of course the report came out and basically blew up this whole Russia collusion theory.

“Now comes this whole question of FISA abuse and he’s still telling whoppers about that. It’s amazing that he isn’t called out. And then of course he gets tapped by Nancy Pelosi to lead the impeachment inquiry. Wow!”

It’s simply an imperative that Schiff be hauled in front of the Senate Judiciary Committee at some point early next year and be grilled by the Ted Cruzes, Mike Lees and John Kennedys of the world for his serial lies and fabulist theories. He’s a teenager with the political equivalent of whiskey and car keys and it’s a crushing indictment of the Democrats’ leadership, not that such is even possible anymore after anyone with eyes has paid attention to their work product in destroying practically every major city in America, that a “man” like him could ever be put in charge of much of anything.

In any event, Johnson’s warning that the fabric of the country will be irreparably damaged by what the Democrats are doing today is a cogent one. At some point, conservatives are going to give up on trying to hold together American political decorum and fully embrace the abuses of The Left as necessary and proper tactics of what has now become all-out warfare. And when that happens this will become the Weimar Republic Redux, with warring bands of gangsters in our streets.

There’s a reason you don’t attempt a coup against a duly-elected president with no chance of bipartisan support and no evidence to support a contention that he needs to go. When you do that you will inflame his people against you and you will get murdered in the next election, if not physically murdered.

Some on the Left seem to think there are no negative consequences that can result from this kind of irresponsible behavior, other than that they’ll get their feelings hurt by losing an election. But it can go much further than that. Let’s hope that the backlash against this is limited to the results at the ballot box, because it might very well get worse – especially if today’s stupid vote isn’t the end of the matter where the Democrats’ attacks on Trump are concerned.

Sooner or later the pot boils if you don’t turn down the heat.