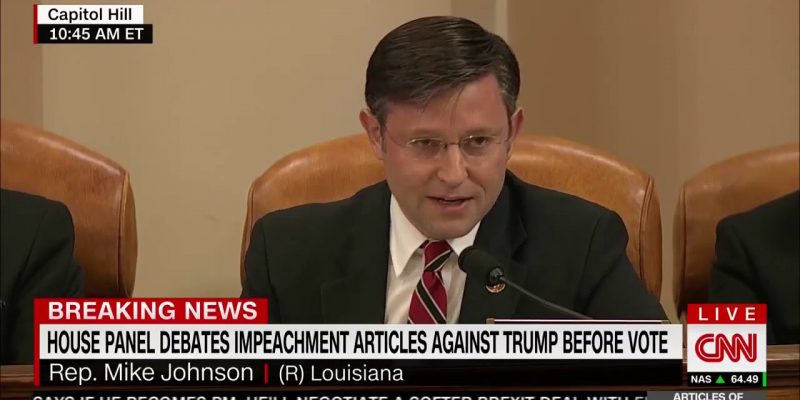 Many of our readers might well have seen the two video clips below of Rep. Mike Johnson (R-Shreveport) eviscerating the Democrats on the House Judiciary Committee for their machinations in moving the impeachment proceedings forward, but if you haven’t, you’re in for a treat. Johnson, who could very well end up chairing the Judiciary Committee in a little over a year should the GOP retake the House in the 2020 congressional elections, had a couple of historic moments during the committee’s marathon session which ended apruptly in confusion late last night, and then on reconvening this morning the committee voted to move forward with impeachment proceedings.

If you weren’t following what happened last night and this morning, it was this…

In case the circus ran too late for most American television viewers last night, Jerrold Nadler has graciously decided to hold off the main event until this morning. That seems to have been the purpose of Nadler’s surprise adjournment of the House Judiciary Committee, just at the point when a final procedural motion had cleared the way for a final vote on articles of impeachment. At 11:15 pm ET, Nadler abruptly declared that the committee needed to “prayerfully consider” their choice and unilaterally ordered everyone back for an unscheduled session today at 10 am ET.

Ranking member Doug Collins erupted over the lack of consultation, while other Republicans called it “Stalinesque.” Another quipped, “Let’s say guilty, then let’s have the trial.” Even MSNBC seemed stunned by Nadler’s move:

“It is now very late at night,” Nadler said after presiding over the two-day session. “I want the members on both sides of the aisle to think about what has happened over these past two days and to search their consciences before they cast their final votes.” …

The Republicans on the panel, blindsided by the move, were livid. When Nadler announced that the committee wouldn’t vote until the morning, gasps were heard at the dais, and Republicans immediately started yelling “Unbelievable” and “They just want to be on TV.” Congress is set to be out of session on Friday and many lawmakers had other plans, some outside Washington.

“This is the kangaroo court that we’re talking about,” stormed Rep. Doug Collins of Georgia, the top Republican on the panel, who said he had not been consulted on the decision. “They do not care about rules, they have one thing, their hatred of Donald Trump. ”

Later, Collins accused Nadler of wanting to wait for a bigger TV audience for the final vote:

“This is why people don’t like us,” he said. “This crap like this is why people are having such a terrible opinion of Congress. What Chairman Nadler just did, and his staff, and the rest of the majority who sat there quietly and said nothing, this is why they don’t like us. They know it’s all about games. It’s all about the TV screens. They want the primetime hit. This is Speaker Pelosi and Adam Schiff and the others directing this committee. I don’t have a chairman anymore. I guess I need to just go straight to Ms. Pelosi and say, what TV hit does this committee need to do? This committee has lost all relevance. I’ll see y’all tomorrow.”

But before Collins unloaded on Nadler, Johnson had his way with the New Yorker’s committee. Here was the first salvo…

And then later, he gave a closing argument…

What makes Johnson such an attractive advocate for his position is that he’s not a yeller or screamer. What you’re getting from him, while forceful, is reasoned, calm and even pleasant. It’s pretty obvious he’s furious about Nadler’s conduct of the hearing, but he keeps it together.

And he’s right in saying this is a Pandora’s Box, though perhaps not in the way he might see it. The real concern is that impeachment, even though it’s going to fail, is the thing which makes conservatives finally lose patience with the Left and start engaging in the kinds of behaviors the post-2016-election Democrats have been doing – harassing people in restaurants, boycotting businesses for their owners’ political leanings, cutting off friendships and romantic relationships and the like.

It was Lenin, if we remember correctly, who said “Everything is political.” The genius of America has always been that we gave the lie to that statement – because our God-given and constitutionally-guaranteed liberties made it unnecessary for everything to be political. But when both sides of the political aisle turn to hatred of each other over the repeated evil deeds committed to win elections and gain advantage, the cultural effects will outstrip the guardrails set up by our Founding Fathers.

And that’s why impeachment is such a scary proposition.

Thanks to Johnson for calling it what it is.