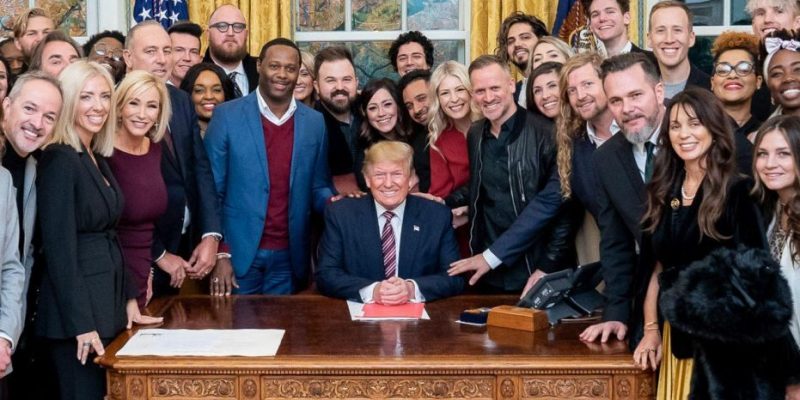 Christian faith leaders gathered to pray over President Donald Trump in the Oval Office recently as he faces the culmination of Democrat impeachment efforts in Congress.

The President reportedly invited the over two dozen faith leaders, saying he needed prayer more than ever. The event was organized by Trump’s personal spiritual adviser, Paula White.

Vice President Mike Pence opened up the meeting in prayer. President Trump’s son-in-law Jared Kushner, who is of the Jewish faith,  was also in attendance.

The pastors laid hands on the 45th President, asking God for “supernatural wisdom, guidance, and protection”.

Pastor Jack Graham of Plano, Texas told Fox News that the group assured President Trump, “evangelicals across America support him. We are unwavering in our support for the President.”

The meeting takes place just days after President Trump reminded the nation of the true meaning of Christmas at the 95th Annual lighting of the national Christmas tree,

“The Christmas story began 2,000 years ago with a mother, a father, their baby son, and the most extraordinary gift of all  – the gift of God’s love for all of humanity.”

“Never in my lifetime have we had a president willing to take a strong, outspoken stand for the Christian faith like President Donald J. Trump has. Whether you are Protestant, Evangelical, Orthodox, Catholic–all Christians need to get behind him with our prayers.”

“Finally, be strong in the Lord and in his mighty power. Put on the full armor of God, so that you can take your stand against the devil’s schemes.” Ephesians 6:10