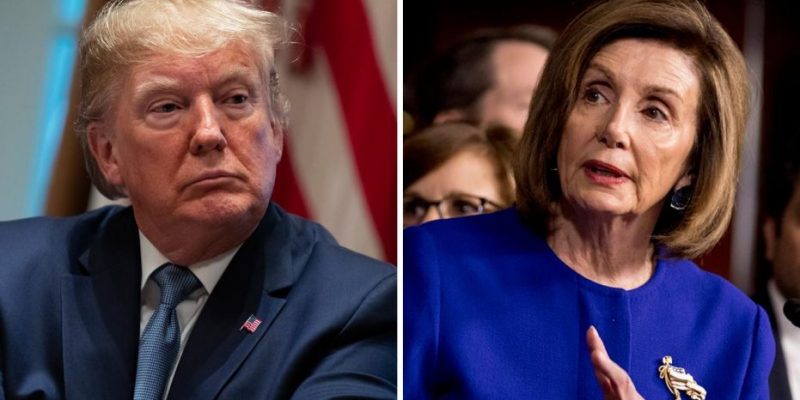 In a scathing letter sent to House Speaker Nancy Pelosi Tuesday morning, President Donald Trump says everything skeptics have been thinking about the impeachment hoax

The President strikes at the heart of the impeachment debate in the scathing six-page letter, taking Pelosi and company to task for putting on the worst political stunt in American history.

“I write to express my strongest and most powerful protest against the partisan impeachment crusade being pursued by the Democrats in the House of Representatives.  This impeachment represents an unprecedented and unconstitutional abuse of power by Democrat Lawmakers, unequaled in nearly two and a half centuries of American legislative history.”

The President then calls the two Articles of Impeachment “not recognizable” under “any standard” of constitutional law. He points out that they “include no crimes, no misdemeanors, and no offenses whatsoever.”

President Trump accuses Democrats of “declaring open war on American Democracy”, rebuking them for invoking the founding fathers in their empty impeachment charade.

The President goes on to articulate his innocence on both charges, that he abused his power in the much-discussed phone call with Ukrainian President Zelensky and that he obstructed Congress’ investigation of the matter.

The forty-fifth President points out that Speaker Pelosi publicly admitted last week that the Democrats’ impeachment effort has been going on for “two & a half years” and he went on to cite several Democrats public pledges to impeach him since the 2016 election.

The President provides a rare glimpse into his personal life writing,

“You do not know, nor do you care, the great damage and hurt you have inflicted upon wonderful and loving members of my family. You conducted a fake investigation upon the democratically elected President of the United States, and you are doing it yet again.”

The President made the following prediction,

“I have no doubt the American people will hold you and the Democrats fully responsible in the 2020 election. They will not soon forgive your perversion of justice and abuse of power.”

President Trump concluded his letter by calling for Democrats in Congress to “get back to work for the American people” and announced his hope for the future writing,

“One hundred years from now, when people look back at this affair, I want them to understand it, and learn from it, so that it can never happen to another President again.”