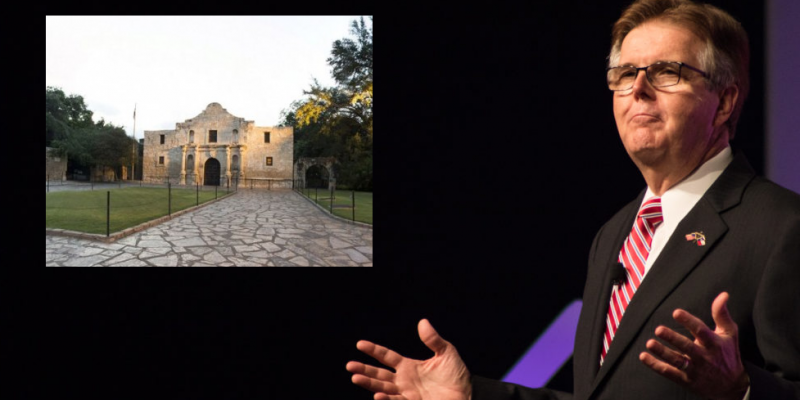 It started last week with a rumor about as large as the legends surrounding the Alamo.

That rumor was Texas Land Commissioner George P. Bush is somehow in favor of placing a statue of Mexican Gen. Antonio Lopez de Santa Anna in the redesigned Alamo complex — this according to one of his 2018 Republican opponents, Alamo activist Rick Range.

Range’s claim seems to have stemmed from information presented at a city of San Antonio planning meeting by General Land Office staff that monuments depicting troop movements during the Battle of the Alamo are a future possibility. Bush fired back to the charges with an accusation that associated rumors are “flat out racist” in nature because of Bush’s Hispanic ethnicity — and some ugly comments allegedly made by activists on the fringe.

In a statement issued Tuesday, Lt. Gov. Dan Patrick retaliated against the accusations of racism and lying, carving out some middle ground for modest Alamo redesign critics. We’ll let the statements speak for themselves:

“The plan includes moving the Cenotaph, which may occur in the next few weeks. This past session, the Texas Senate proposed that this action only occur after it was approved by two out of three groups — the Texas Historical Commission, the Daughters of the Republic of Texas or the GLO. Senate Bill 1400, which included this provision, passed the Texas Senate in a bipartisan, 31 to zero vote.

“Recently, the GLO Commissioner and a member of his staff have derided anyone who disagrees with the Alamo redesign as a small vocal minority who are liars and racists. This is offensive and inaccurate. The 31 members of the Texas Senate represent over 28 million Texans. They are not a vocal minority — nor are they liars or racists.

“I appreciate the commitment and volunteer work of the citizens who make up the Alamo Trust and I don’t want their work to be stifled by name-calling or other interference from the GLO Commissioner or his office. I look forward to meeting with the Alamo Trust early in the new year. The legislature has invested over $100 million dollars in this project on behalf of the people of Texas and I want to be sure that every step is well thought out and worthy of the sacrifice of the men who died at the Alamo.”

In a response reported by Texas Scorecard, Bush said his remarks were taken out of context.

Bush: “To twist my words and put out a statement saying I called Honorable State Senators and anyone who opposes me racist is wrong. It is a very dangerous mistake for an elected official with his power to make.”

In 2018, Land Commissioner Bush, as a first-term incumbent, was opposed by three Republican candidates who made the Alamo a central focus of their campaigns, including former Land Commissioner Jerry Patterson (30%), Davey Edwards (7%), and Range (5%). Bush later won the general election with 54% beating out Democrat Miguel Suazo and Libertarian Matt Pina who also joined in with concerns over the Alamo renovations.

UPDATE: In a campaign press release (as opposed to the official statement released earlier), Patrick responded to Bush’s response. Read it here.